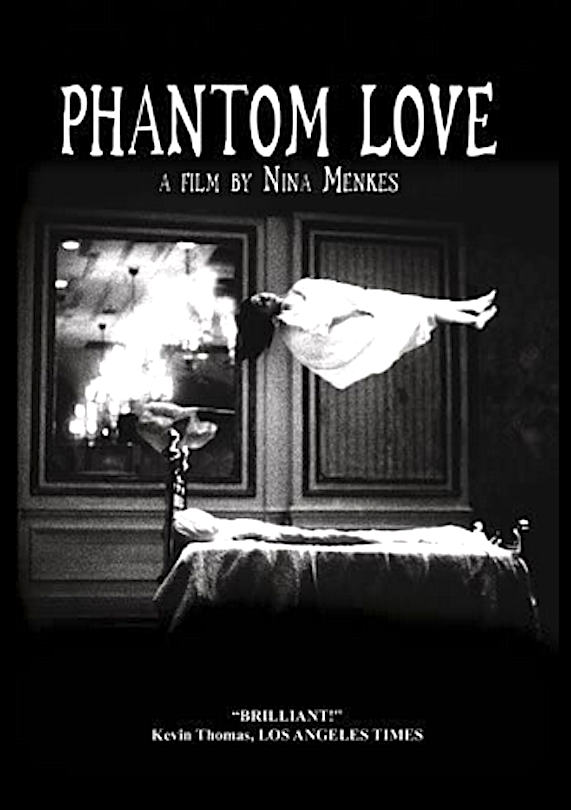 Los Angeles, CA (The Hollywood Times) 3/28/22 – On Saturday afternoon the American Cinematheque at the Los Feliz Theatre screened Nina Menkes’ Phantom Love (2007), a fairly demanding experimental film about a woman’s journey into the depths of her being.  Phantom Love is part of a retrospective of films by American independent filmmaker Nina Menkes, who has a definite feminist aesthetic that calls into question the dominant male gaze in cinema. Phantom Love is almost at the opposite end of the spectrum to cinema-as-mass-entertainment. Not quite as difficult as Warhol or surrealist artist-directors such as Matthew Barney (Cremaster), but it much more than the films of David Lynch or Brice Cauvin (Hotel Harabati). To its credit, Phantom Love follows recognizable Freudian/Jungian psychological theory when it comes to symbols. Menkes ultimately wants to be understood rather than to mystify. In her films, Menkes intends for the viewer to absorb the images without any internal commentary.

Nina Menkes’ surrealist film, Phantom Love, starts without any hint of stillness. Black and white images. Beautifully framed. A man’s body moving back and forth over a woman. We see the woman’s face and her hands with her darkly-polished fingernails touching and clutching the man’s body. With the man, we only see his back – as he moves through the sex act. Her eyes are open but not focused on love-making. The camera pans back slightly. We see they are lovers. But the woman’s eyes are distant. She gazes over his shoulder. Eventually, she closes them.

The long opening sequence has already put the viewer in a contemplative mood, in spite of its carnality. Lulu (played by Mariha Shoif), the main protagonist, subsequently draws us into her self-observation. We travel down her psychological corridors to experience pain, then resolutions. Each shot is brilliantly composed in exquisite monochrome. Brutal police. TV footage of Iraq (does she know someone on a tour of duty or does the news just reflect her inner anger and frustration?). The woman silhouetted with her cat against the window.

Phantom Love is a stunning feature shot in black and white 35MM – daring and unique. From the opening frame, Nina steadies her shots with a hand-held, “raw” edge. She abandons some of her more formal static shots in favor of a roaming eye – an eye that seems to dig down into her subject, dig a hole – pierce and burrow into the depths of the alienation and repression of her female characters. Her central character, a blackjack dealer living in Los Angeles, is somewhat reminiscent of Firdaus from Queen of Diamonds; but unlike Firdaus, this protagonist struggles with “family problems” such as an overbearing mother and psychotic sister named Nitzan (Juliette Marquis). At one point, the “sister” disappears and seems to fuse into the psychic space of the protagonist/blackjack dealer.

Even Lulu’s lover (Bobby Liguori), although a bit of a stud, is only interested in sex with Lulu. We never see his face – only his back during sexual encounters. The pressures on Lulu are becoming too much to bear. She files her nails obsessively – the same nails, so impersonal at the roulette table, that rest gently and kindly on the sweat-beaded shoulder of her vigorous lover. Then suddenly Lulu’s bed is transformed magically as she begins to levitate in air above the bed, as true love-making is levitating, defying gravity – a borrowing from the levitation scenes in Tarkovsky’s Solaris and Mirror. As Menkes explains at the Q&A after the screening of her film, the levitation scene is the brief second act of a three-part narrative. What makes it so different from Tarkovsky is that the levitating Lulu suddenly explodes in a fiery ball into hundreds of pieces.

Suddenly we are in a different psychological space. It seems a weight had been lifted as butterflies encircle Lulu and she stands naked in the window of her medieval-style apartment. The third part of the film confirms that Phantom Love is a woman’s journey into the depths of her being. Following the line of thinking of the psychologist Carl Jung, everything that irritates us about others can lead us to a better understanding of ourselves. Lulu’s inner journey leads her to try to resolve the elements that screw up her life.

Using psychological symbols presents a filmmaker with a dilemma. Dismantle conventional linear narrative too much and the viewer can become perplexed or alienated: Do it too subtly and they may miss the point. Bunuel’s ants escaping from a hole in the hand (Un Chien Andalou) can seem off-putting or obscure. But a similar suggestion that decay is just beneath the surface in Danny Boyle’s 28 Days Later can easily be missed because audiences focus too much on the story. Directors like David Lynch (Mulholland Drive, Lost Highway) have helped wean audiences onto surrealism and the opportunities offered by cinema to explore subconscious worlds. Cinema-lovers who tire of formulaic films may find more interest in the challenges presented by works like Phantom Love.

Menkes has two strong advantages. Firstly, her poetry is beautiful to watch. Any distressing representations -– those of ordinary life -– the endless stresses and struggles of relationships, difficult family ties, even the noise of the TV – are gradually overpowered by the hypnotic, dreamlike images of her inner consciousness. Secondly, the process, unlike the negative message of surrealists such as Bunuel, is transformative. Like Cocteau’s Beauty and the Beast, Lulu is finding goodness inside ugliness, rather than expending vast efforts to prove the emptiness of the bourgeoisie, society or the Church. A positive experience, and not pitted against any “other.”

At the Q&A, Menkes spoke about where the idea for her film had originated. She said that she was working with a shaman in Israel. Using lucid dreaming and trance, she had to experience the cleansing of her own psychological demons – an exhausting business by her own account – before she could express the process in her art. “I was quite ill, physically, for much of the seven months,” she says. But the result is an intimacy with the process and images that seem to have a subconscious impact.

As a woman filmmaker, Nina Menkes stresses that “the map is not the territory” – If you don’t like what you perceive, then start by changing your perception of it. The ancient Egyptian and Tibetan books of the Dead talk of similar processes to transform monsters into benefactors –much like Beauty and The Beast. What is perhaps most disconcerting is that Phantom Love forces us to re-evaluate what we mean by “love.” What we generally call “love” is superficial and visceral, feeding on superficial wants and desires. The very title of Menkes’ film Phantom Love The title recalls a line from Resnais’ classic, Last Year in Marienbad. The woman ‘A’ says “You’re like some phantom waiting for me to come.” In Resnais’ work, whether or not the protagonists find fulfillment is a matter of interpretation by the viewer, or perhaps the male protagonist. For Menkes’ Lulu, it depends on herself.