Los Angeles, CA (The Hollywood Times) 3/28/22 – Included in the recent retrospective of the films of Nina Menkes by the American Cinematheque is her interesting film Dissolution (2010), loosely based on Dostoevsky’s Crime and Punishment. A sustained dark night of the soul, Nina Menkes’ Dissolution plunges us into the disturbed mind of a man haunted by his murder of a Tel Aviv pawnbroker. Dissolution combines an almost surreal fairy-tale energy with brutal black and white realism to explore the condition of violence which permeates contemporary Israeli society. Shot in Jaffa, the predominantly Arab area of Tel Aviv, the movie follows the moral collapse and first glimmer of redemption of a young Israeli Jew, played brilliantly by non-actor Didi Fire. This is a deeply personal work about one man’s inner journey, but can also be read as an allegory about Israel’s moral responsibility as well as a portrayal of male violence towards a devalued feminine. Dissolution is rarely screened but a DVD/Blu-Ray copy can be purchased at ninamenkes.com. Nina Menkes’ latest film Brainwashed: Sex-Camera-Power (2022) is coming to theatres soon, so be on the lookout.

The cinema of Nina Menkes has often been described as feminist, but it is not strident or didactic – but a darkly playfully and deeply personal image-making that transcends theoretical frameworks. As in all her films, Menkes provides rhythmic, haunting meditations on violence and misogyny. Her coarsely black-and-white feature from 2007, Phantom Love, intersperses quiet depictions of intense sexual drudgery with stock footage of octopus tentacles seemingly borrowed from Ed Wood; Lynchian serpents, meanwhile, slouch about the halls outside the harried protagonist’s quarters. Something of a tonal homage to Chantal Akerman’s Jeanne Dielman that suffuses its climax of distaff aggression throughout its ellipses-prone duration, the film is less an examination of gender than a dismantling of sexual perspective through flourishes of near-magical realism.

Dissolution is the first of Menkes’s fiction films with a central male character. The film was conceived collaboratively (with Didi Fire, an Israeli artist whose unamused, muscular presence calls to mind that of John Lurie), and it accordingly focuses on the tumultuous internal experience of a young Jewish male living in an Arab slum who, via a minimalistic nod to Dostoyevsky, murders a junk peddler. The act has concrete value as both spiritual defiance and economic-minded scheme, but it’s framed as a disturbance of scant sharpness amid the grotesque monotony of the unnamed man’s quotidian existence – insofar as lunchtime discussions of eerie dreams with acquaintances punctuated with languorous visits by scorpions and gargantuan snails can be considered ordinary.

Didi Fire’s man immediately appears menacing, as he rhythmically sharpens a knife in his dingy apartment like a warrior readying for battle. He may only be doing this to cut an especially tough slice of cow’s lung he buys in a butcher’s shop, an exchange that also suggests this guy is poor and a bit of a trickster. He’s weeks behind on his rent, much to the disgust of his stressed-out landlady (Zeynab Muchareb), and whiles away his days either flopped on his bed or hanging out in cafes with a talkative friend (Slava Bibergal).

Direct echoes of Dostoevsky appear when the man visits crusty pawnbroker Malka (Filina Klutchkin) and haggles over the price of a supposedly antique watch. During the man’s subsequent visit, Menkes’ camera remains outside Malka’s apartment, effectively eavesdropping on screams and sounds of a struggle. Becoming unhinged, the man pilfers some jewelry from Malka’s flat and buries it in a forest glen outside of town.

When the protagonist played by Didi Fire cooks slabs of meat in his apartment, the camera frames the crackling flesh in unceremonious close-up, occasionally cutting to the man’s distantly disgruntled face. Just as the woman in Phantom Love endures the harsh frequency of sexual intercourse with frank listlessness, Fire’s Jewish fish-out-of-water confronts brunt erections with tetchy withdrawal. In one long, static shot reminiscent of Claire Denis, the young man stands bare-chested atop a nightclub, assuming variously tense, boxer-like stances; he eventually and gently bundles himself into a fetal heap on the roof before bothering to fondle himself. 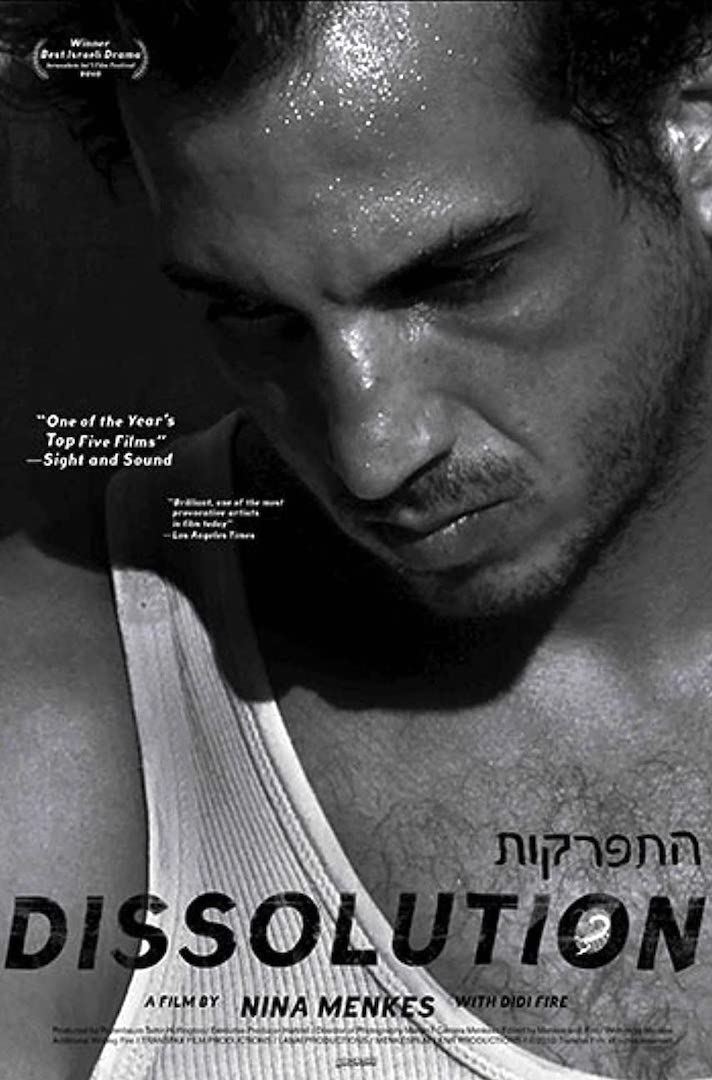 These actions serve as a prelude for the film’s fascinating second half, which captures the man’s growing isolation and paranoia, with a minimum of dialogue and maximum of beautifully judged elliptical editing. The man is viewed with suspicion by younger Arab men in his immediate block (particularly after a near-fatal domestic incident across the street), some of whom dog him as he wanders home from long, aimless nights in a bar. There, he’s ironically befriended by a veteran cop (Yohanan Harrison), who can sense that something’s amiss. 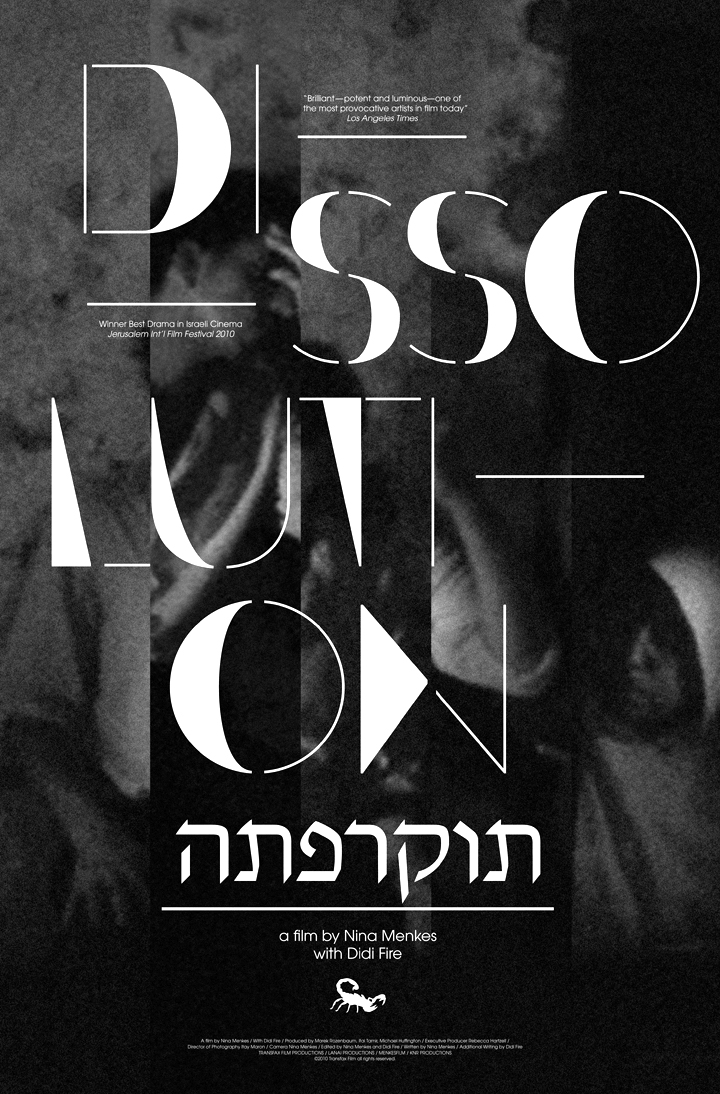 Menkes, working with digital formats for the first time, adopts camcorder-specific grammatical devices – such as sharp, jagged zooms – to suggest the putatively objective “opticon” of surveillance mechanisms and journalism tools. (In one notable instance, the fourth wall is even broken, significantly within the confines of a government building.) At several points in the drifting story, we’re also thrown from the protagonist’s brooding perspective to witness the aftermath of Tel Aviv street violence from aerial vantage points, as if drawn from the raw feed of a single news camera. None of this has any identifiable socio-political resonance, but the aura of municipal as well as cerebral unease becomes essential to Menkes’s aesthetic of prosaic horror.

Surreal morsels worm their way through Menkes’ vague narratives, appearing to signify not only the characters’ disorientation, but Menkes’ own toward the content she explores. There’s a sense in which her camera is usefully frustrated by ghastly surfaces it cannot penetrate or understand. In one of Dissolution’s finest scenes, a man compares the fish on which he’s dining to his mother’s prospective corpse, and then we watch him retrieve a piece of junk jewelry from the animal’s broiled innards (another favorite Menkes image). This image is just-barely thematically relevant, and almost fogged with the protagonist’s guilt, but it’s presented with such awkward calm that we don’t bother questioning what it might hide. Menkes’s achievement here is even more rare than those of her well-known influences: Her camera is at its most effective when it, too, seems dumbfounded at what it’s seeing.