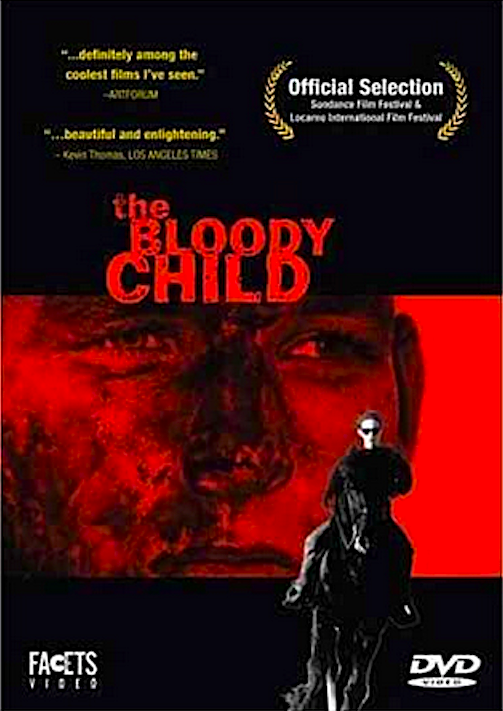 Los Angeles, CA (The Hollywood Times) 3/25/22 – As part of a retrospective of the films of Nina Menkes, the American Cinematheque screened a 4K restored print of Menkes’ The Bloody Child (1996), a radical and somewhat strange experimental feature of minimalist storytelling inspired by a real incident. It is based on a L.A. Times article that Menkes read about a U.S. marine just back from the Gulf War murdered his wife and was caught digging her grave in the Mojave Desert by a military patrol. Menkes describes her film as a murder mystery told in reverse. She searches for neither psychological motives nor sociological explanations. Cutting a-chronologically between stages of the marine’s arrest and details involving a female marine captain (played by Tinka Menkes, the director’s sister and creative collaborator) and other soldiers on the scene, as well as incorporating 16-millimeter footage shot by the Menkes sisters much earlier in Africa, the film is fundamentally concerned with the overall climate of American violence and how this affects women. Apart from actress Tinka Menkes, all the cast members are actual Desert Storm veterans recruited from the marine base in Twentynine Palms, California, and this authenticity is part of what gives the film power. For the viewer, The Bloody Child is beautiful and difficult, haunting and frustrating due to its excruciatingly redundant scenes – but not easy to forget.  It was filmed at Twenty-Nine Palms, Calif., the largest Marine base in the country, which is located in the Mojave Desert.

The plot is simple. It is about a real incident that happened to a marine returning from the Persian Gulf War who murdered his wife and was caught at sunrise digging her grave in the Mojave Desert by a military patrol. The filmmaker tells her story by showing the military police standing by the murder site making small talk while waiting for the arrest to be completed while the camera is cutting back to show the marines off-base relaxing in a country-and-western lounge, as some lewdly dance in front of some female patrons. The boredom is broken up by camera shots of marines in conversations that we can’t hear in its entirety but are treated to little snippets of, hearing mostly their curse words. The captain in charge of the arrest is Tinka Menkes, the director’s sister. She tries to get the male marines to take this incident seriously and act professional, as they treat her as an outsider but with proper military respect. Because the film had no linear story and followed no chronological order and stressed the mundane life experienced on the base, and did not follow the usual way a murder investigation is filmed — it appeared surreal.

Supplemental, recurring images include: a young, nude woman in a jungle clearing toying with palm fronds and marks on her arm; a bar crowded with soldiers off duty drinking, playing pool, and lasciviously dancing; a ship drifting slowly in long shot on an unnamed sea (shot on location in North Africa); a man swimming away from the camera in an outdoor pool; an apartment and a bathroom with a man and woman in minimal dialogue; a Marine screaming at and shoving the detained man’s head into his wife’s bloodied corpse lying across a car’s back seat. The camera frames the perpetrator from behind in those and all other scenes (as he drives to the desert and when apprehended), more a generic, brutal killer than a specific individual.

At the desert arrest location (shot in 29 Palms, California), late in the eighty-five minute film, a large, beautifully groomed black horse trots down the road toward the two Marines standing to the side of the now relatively abandoned site, though this could signal the beginning as opposed to the conclusion of the incident. While other tableaus intervene, I briefly describe only principal, repeated images to offer an idea of the jigsaw puzzle organization distinguishing The Bloody Child. Along with scenes from northeast Africa (Tinka is sitting naked in the forest clearing, writing Hebrew words on her arm). There is also a riderless black horse moving freely on the Marine base, which Menkes explained in the Q&A was some of the prevailing images she planned beforehand. As she sees it, the black horse is the most alive creature in the film, as all of the other characters seem to be trapped in a purgatory after death. The film ends with a quote from the Book of Genesis, about Lot’s wife turned into a pillar of salt when she looked back. Lot’s wife was punished for curiosity but also daring to gaze upon the destruction left behind.

Defining separate spaces, the three primary locations contrast visually: the dominant desert site in sharp focus dominated by denuded, brown landscapes with mountains in the distance and soldiers moving about in open spaces; the darkly lit bar claustrophobic and noisy; the jungle site presented in soft focus and muted colors. Complementing this visual blend, voiceover narration, bar music, and barely discernible exchanges among Marines add another challenging, at times perplexing element as we strain to understand what is spoken. The discernible audio comprises: quotations from Macbeth’s witches, heard several times (described in film notes as the disembodied voice of the murdered wife); the aforementioned angry, cursing Marine violently manhandling the murderer in the car with the dead body; sparse dialogue between the man and woman in the apartment; country music in the bar; and random environmental sounds. the disembodied voice of the murdered wife is heard at times as the voice of a violated spirit, but it seems that only the female Marine captain played by Tinka Menkes can actually hear the voice of the dead woman.

In her own words, experimental filmmaker Nina Menkes offers the best perspective on her film, stating, “In contrast to most Hollywood films, The Bloody Child doesn’t use violence as a dramatic element. As in real life, the violence in the film damages, it ricochets in multiple directions, and generates negative energy which circles back and perpetuates itself.” She thereby offers a stark reminder of sensationalized content and reassuring resolution of mainstream narrative films; that is, conventional films present a lurid murder with, typically, an investigation resulting in the apprehension of the culprit, law and order restored, viewers leaving satisfied and relatively unbothered by the heinous act. Menkes explores further the impact of such savagery on all closely and tangentially affected. Her newly restored 1996 film is accurately described in several postings as an hallucinatory meditation on violence. Indeed, tentacles of violence reach far beyond immediate, government-sponsored warfare to haunt and affect an inclusive ‘civilized’ society through all individuals impacted. Subtle and complex, The Bloody Child’s rich, complex reflection on violence offers a poignant, important consideration of state-sponsored and individual brutality.