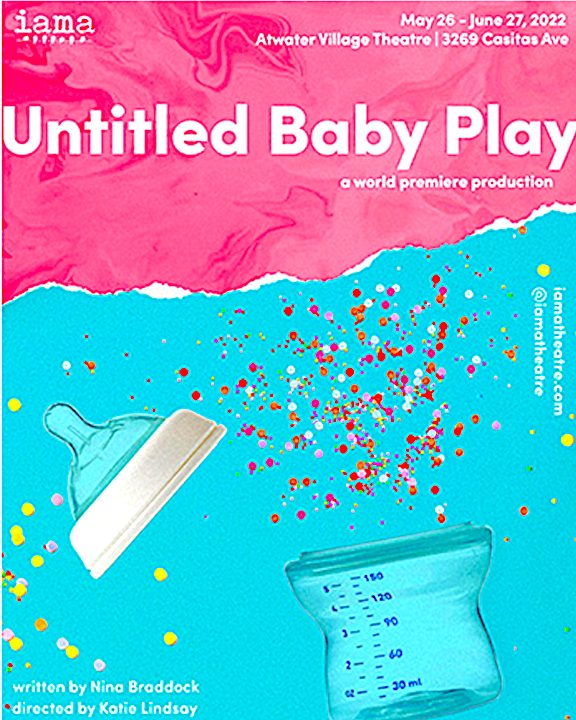 Los Angeles, CA (The Hollywood Times) 5/28/22 – On Thursday, May 26, at the Atwater Village Theatres in Los Angeles was opening night of a new play by Nina Braddock entitled Untitled Baby Play, which was written in 2016 and scheduled for production in L.A. prior to the pandemic. Untitled Baby Play is about six women who find themselves trapped in an email chain as they plan a baby shower for their friend Libby. What starts out as a comedy of manners for the digital age deepens as her longtime friends from childhood and college deal with cyber miscommunications and email chain snubs, even as they face their own existential angst surrounding the “baby question.” These women – a doctor, a freelance journalist, a consultant, an elementary school teacher, an aspiring actress and a software engineer – are forced to question their own convictions, fears and understanding of pregnancy and motherhood. When the shower finally comes to pass, their individual neuroses reach full throttle. Untitled Baby Play is presented by the IAMA Theatre Company, under the leadership of Stefanie Black, in its 14th season of story-telling on stage.

Nina Braddock, the writer of Untitled Baby Play, grew up with a tight-knit group of girlfriends dating back to kindergarten and managed to maintain this friend-group through the many different phases of adolescence and adulthood. But at a certain point, as we all know, friendships become challenging to negotiate as people grow in different ways. These transitional growing pains as we move into adulthood serve as the inspiration for her new play Untitled Baby Play. In it, Braddock explores how a group of women from childhood maintain their friendship and “invest in the way their lives have taken shape.”

In the play, the women all join forces to throw their friend Libby a baby shower, but through their various text message and email chains, a lot of miscommunication and hilarity ensue – as they are staged in Act 1 of this 2-1/2-hour play. Vying for control of the shower planning are childhood best friend Penny (Sonal Shah) and college best friend Meredith (Laila Ayad), who disagree on all the basic details of the party. Eden (Sarah Utterback) and Gillian (Courtney Sauls) have also known Libby since elementary school, but their own ambivalence over motherhood and desire to keep the peace leaves Penny fighting her battles solo. Rounding out the group are Libby’s other college friends Natalia (Anna Rose Hopkins) and Clara (Jenny Soo), a new mom who is doing her best to keep up with her friends with a baby at home and a troubled relationship with her female partner.

At the heart of the play is the theme of motherhood – deciding to become a mother, facing the challenges of fertility, anticipating birth, and the actual experience of being a mother. As the play’s title deliberately suggests, the women are struggling with their “evolving and unresolved” decisions around “the baby question.” They are each a work-in-progress, as is the unborn and unnamed child about to enter Libby’s, and by extension, their lives. While all the same age, each woman is at a different place in relation to motherhood, and this can be cause for judgment, pain, or just sheer ignorance. Braddock wanted to write a play about “women who love each other but also don’t understand each other.” Sisterhood is, after all, not always easy, though it is ultimately rewarding and, arguably, vital.

Technology and its many forms of communication (especially emails and text messages) is another interest of Braddock’s. She’s always been fascinated by the way “people are performing as they are writing their texts or emails.” It is true that there can often be a performative aspect of showmanship or “joie de vivre” in our digital voices that do not always reflect the reality of our lives including our feelings. For this reason, the play is as much an exploration of how we stay connected in today’s day and age and the limitations of these modes of communication as much as it is about the strengths (or weaknesses) of our friendships.

“I decided to work ‘Untitled’ into the title of the play because each of these women is very much in process, both in terms of where they are choosing to find meaning in their lives and in regards to the motherhood question,” explains Braddock. “When I hit my thirties, I noticed that, as my friends and I started to make different career and life choices, the nature of our friendships began to change. How do you remain close when your friends’ lives start to look very different from your own because you each have different priorities? Friendship is always a work in progress—a little messy and a little chaotic. And even though we are all so busy – or tell ourselves we are – it’s so important to carve out time and space to appreciate what your friends value, and what gratifies them. I hope this play reminds people of the need for that.”

“The development of this play with IAMA has been extensive,” Braddock says. “We spent a year working on it with this amazing cast, and they have enriched it enormously.” Set designer Cindy Lin created a most interesting set that featured six miniature rooms decorated in bright colors (as if for a baby shower) – each reflective of the current lives and interests of the six female characters. When a character is online, a white neon tube akin to those seen on television game shows surrounds the space indicating her presence online. Of course, somewhat manic Penny (Sonal Shah) is obsessed with firing off emails to her female friends, as she obsesses over every detail of planning Libby’s baby shower. In Act 1, she dominates the online conversation, as others fleetingly agree and disagree on the date, details, food, and gifts for this overly planned baby shower. In Act I, Clara (Jenny Soo) is so overwhelmed with an infant at home and trying to pack up her apartment that she seems mentally absent.

Each character has her own point of reference. Eden (Sarah Utterback) is obsessed with her yoga contortions and her work as a free-lance journalist who is trying to call attention to the imprisonment of a Dominican woman accused of murdering her own child. Eden’s seemingly colder personality has its reasons, as we discover late into Act 2. Gillian (Courtney Sauls) is a grade-school teacher who is constantly pumping up the brilliance of some of her more gifted students, explaining her future lesson plans, and adding silly signature quotes. She has her own issues with her mother who is constantly pressuring her to have a baby and she is determined to not bring a child into this modern world which she feels is headed to a global disaster. She has a love of teacherly things, including the idea of wearing costumes to the baby shower.

Natalia (Anna Rose Hopkins) is an aspiring actress who bemoans her lack of success at getting cast in a major role but is resilient enough to keep preparing roles for auditions in hopes of a break-through. She is distracted with her own preparation for a role and, as we see at the beginning of Act 2, she has landed on a rather unexpected role of a pregnant woman in a “tour de force” comedic monologue “What to Expect When You’re Expecting” that she performs on stage alone before the curtain opens on Act 2. Later we see her despairing over her failed auditions and hiding in the oversized bathtub at the home of Libby’s mother at the baby shower.

Meredith (Laila Ayad) is a software engineer who seems to be traveling back and forth from New York to Cincinnati all the time and almost never sees her husband, with whom communication seems to have become so limited that some of the others think she is headed for a divorce. Meredith is a bit of a puzzle, even to herself, as her colder personality seems to stem from her desire for success at her chosen career. She is terrified of getting pregnant, as it would put a serious dent in her aspirations. All through Act I, Penny, the ultimate email junkie, is furious with Meredith who never bothers to “sign” her emails.

Clara (Jenny Soo) is barely present in Act 1 but emerges as a significant voice in Act 2. She is the only one of the six characters who has actually experienced pregnancy and birth. She provides the needed perspective on what she remembers of childbirth, although she was drugged enough to not remember much. Clara provides the counter-balance to the anxieties and fears of the others in Act 2, which is the actual baby shower for Libby (who we never see). Act 2 takes place in the larger bathroom at the house of Libby’s mother, so the comings and goings from the bathroom are the perfect occasion for gossip, confrontation, and revelation. Act 2 is more like a standard comedy of manners in television format. Both Penny (Sonal Shah) and Meredith (Laila Ayad) have the greatest revelations of all: It is their discovery of their own angst over their bodies and their lives that bring us to the play’s end.

Nina Braddock is a New York-based playwright, television and feature writer. She is currently a co-executive producer on Saint X for Hulu, and previously served as executive producer on The Sinner. She worked on The Bell Jar (Showtime), Servant (Apple), Brave New World (Peacock), and Berlin Station (Epix). Untitled Baby Play is directed by Katie Lindsay, who has a fine list of recent work, including A Walk in My Neighborhood (“Genius” – LAist), Orlando by Sarah Ruhl (Williamstown), Buyer & Cellar by Jonathan Tolins (Celebration), The Door You Never Saw Before by Matt Schatz (Geffen Playhouse), Red Emma & the Mad Monk by Alexis Roblan (The Tank, New York Times “Critic’s Pick”), and Keeping up with the Prozorovs by Lucy Gillespie (Hollywood Fringe; Encore Producers Award, Best Female Director nomination).

Untitled Baby Play opened on Thursday, May 26 at 8 p.m., with performances thereafter on Fridays, Saturdays and Mondays at 8 p.m., and on Sundays at 3 p.m. through June 27 (dark Monday, May 30). All tickets are $35. Atwater Village Theatre is located at 3269 Casitas Ave., Los Angeles, CA 90039. Free parking is available in the ATX (Atwater Crossing) lot one block south of the theater. For reservations and information, call 323-380-8843 or go to www.iamatheatre.com.