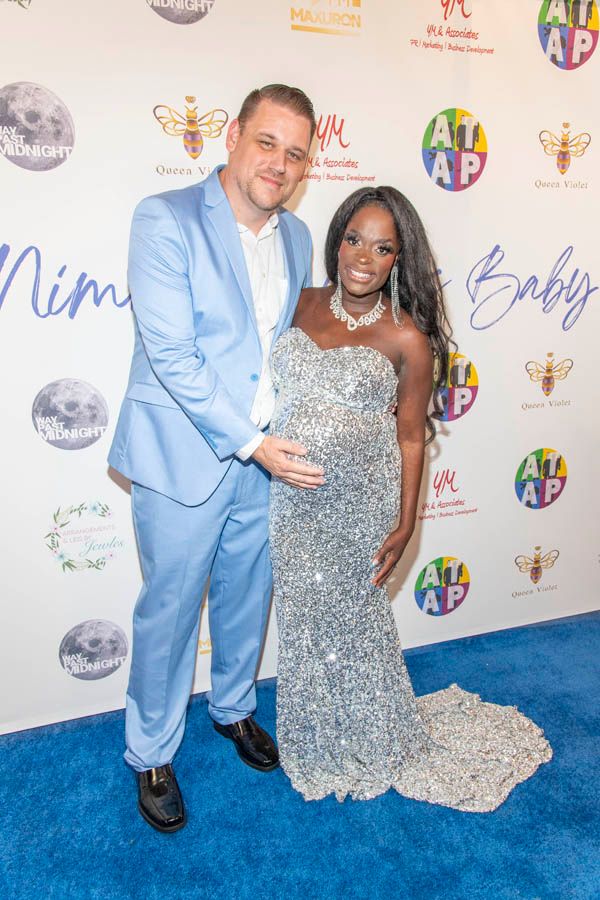 Los Angeles, CA (The Hollywood Times) 12/26/21 – Rising star and actress Nimi Adokiye, and her husband, director Danny Eley, spoke to The Hollywood Times about their work, living in Orange County, their faith, background and their new baby. Due any day now, Nimi showed off her baby bump and had a nice chat with me about her specific niche and dedication to her values in her work. 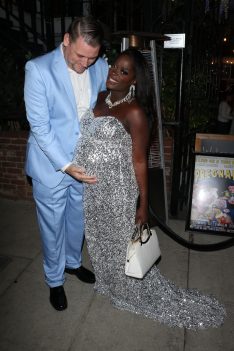 As a Hollywood actress, Adokiye has worked with many actors, including Queen Latifah, Danny Glover, Tyra Banks, Sarah Silverman, and bands such as Lifehouse, Weezer, and Life Afraid.  Her most recent role was in “Bob Hearts Abishola” released this year. Adokiye’s family is originally from Nigeria. She was born in Texas, and as an infant, she moved to Nigeria with her family until the age of four years. Adokiye knew she had a passion for acting after her first theater production in Willy Wonka and the Chocolate Factory where she played Grandma Georgina. Adokiye then moved to Los Angeles to pursue a professional acting career. She attended Stella Adler Academy of Acting and Theater in Los Angeles where she studied under Tasha Smith.

On her Christian faith, Nimi says, “when I came out here to California, many years ago, I wanted to make sure that even though I’m coming into an industry where there’s so much chaos, I want to make sure I’m grounded in my faith. And pursuing this career, I wanted to stay true to myself, I didn’t want anything to deteriorate me from the path God has planted for me. Being a Christian in this industry, to me is so important. I want to make sure that I’m able to impact people as much as I possibly can. I want to make sure I could do good for God. And when I go to heaven, I want God to be proud of me for what I’m doing. That mission is so important for me.”

Nimi has turned down roles and has had strict qualifiers she holds strong to.  “I’ve had a few of my previous agents and reps that have asked me, would you do nudity? Would you do same sex kissing? I deny it, decline it and say, ‘sorry, I can’t do that because of my faith’. Sometimes they try to push me for it because the money is good. But I always go to my faith and say, ‘No, that’s not what I’m about. That’s not me, as a person’.”

Danny adds that he gets asked, “As a Christian, how can you be a part [Hollywood]?” His response is “how are we going to impact something if we’re not engaged? I mean, our famous quote is, preach the gospel always and at all times and when necessary, use words. And so a lot of times, just us living our lives as people of faith, presenting that to people and they notice ‘wait a second, there’s something different here’.  You would be surprised how many people come to us at their low point to say ‘Alright help me out because you guys have something going on that I need in my life’. And we’re always able to be that light in the darkness.”

After moving to California, Texan Nimi and Oregonian Danny met at a local church, Elevate Ministries.  Danny tells us, “We both moved to California at the same time. It took us years to match up after we got here. The story that we told our parents is we met at church. The true story is we met online and we found out as we were communicating online that we went to the same church. We just went different days, and we never ran into each other. So it’s really funny. Like our Facebook memories has a lot of those same pictures from that day at church, we were at the same place at the same time. It would have happened eventually.”

On Christian film, both are excited about the growth of the genre. “We went to the International Christian Film Festival in Orlando, Florida, last May. We asked an actor that is in every one of those cheesy Christian movies. He said. ‘you got to look at Christian film as kind of at its infancy, right, it’s beginning to you know, if you compare a Christian film, in its infancy to some of the some of the big studios in their infant films, you would see kind of the same type of thing, but they’ve learned how to hone their craft, and we’re learning how too.

One of the movies I’m looking forward to is ‘American underdog’, produced by the Erwin brothers. We were blown away last weekend, when we watched ‘the chosen Christmas special’. ‘the chosen’ is a series, the largest crowdsourced series ever. They’re doing a multi season series on not just the life of Christ, but it’s really about the disciples. This brings a dynamic to each character, because when you’re reading the scriptures, Paul, John and James went with him to see this. That’s what you read. But really, what were their reactions? What were they thinking? There’s a great presentation of each individual. Even the character, Matthew, who is a tax collector.

So Matthew is actually portrayed as an autistic person. And in kind of a sense of, he’s an outcast on both sides. He’s an outcast in the Romans, so that’s kind of the personality that could do that job, somebody that’s good with numbers that’s very focused and diligent on one specific project. And so to see, real life, people living this experience is really cool.

And so they just did a Christmas special. Everything is direct broadcast streaming. They broke the record the first night $1.6 million in ticket sales. Fathom said we need you 10 Nights. They said okay, we’ll give you 10 nights.  It was the top grossing movie in the country, it topped House of Gucci’s opening.  But one of their big things is they want to make it free to everyone. So they have it on their app, and they said we’re gonna stream it. And even though it’s still in theaters, we’re still gonna stream, that’s fine, do it.”

For future roles, Nimi wants to be a superhero like Wonder Woman, or even a villain but both have serious goals, especially Danny on the production side and telling important stories that haven’t been heard.

“I think the important stories for us to tell are the stories of faith and some of our lived experiences, some of the stuff that she’s been through, growing up in a Nigerian household, especially coming from parents of immigrants. For her, there’s a specific path that you need to follow. And when she pursued her artistic pursuit, that wasn’t well accepted in the household. Being able to tell that story, being able to see God move in our lives and miracles. I think my ultimate favorite stories ever, that we watch are always redemption stories, where the guy comes back and all of a sudden, he’s a key character who helps change things.”

They live in Mission Viejo in Orange County and are loving it. “We love being in LA, we love going to Hollywood. We love being a part of that life, but at the same time, it’s so nice to just come back to a relaxed environment, where you don’t have to burn too much energy to go to the grocery store.”

Recently, Nimi and Danny threw a baby shower in West Hollywood to welcome the arrival of their first child. They figured Orange County friends would drive to Hollywood but not vice versa.

The parents-to-be held a charming baby shower and red carpet event on Dec. 4 at the Queen Violet Restaurant in West Hollywood, Calif. During the baby shower, Nimi and Danny, revealed their baby’s name will be Daniel Ibim Eley. The couple decided to name their baby after both of their fathers’ names. Daniel will be the third generation of Daniel’s in the Eley family. The baby’s middle name, Ibim, is after Nimi’s father.

“To say I feel blessed is an understatement. I appreciate all of the love and support everyone showed me and my husband on our special day for baby Daniel. I look forward to experiencing the precious gift of motherhood,” said Nimi.

Danny is an up-and-coming director. His directorial debut was a short film entitled “Girls Night Interrupted,” which was released in 2019. Danny is currently in development with his second film “The Tower in the Servant” under his production company Way Past Midnight. Danny is also the co-founder and president of a non-profit that helps underprivileged families called All Things Are Possible (ATAP).

Looking ahead, Nimi will be taking a short break and then go back to her busy schedule. She shares, “I want to make sure I mastered down motherhood because I’m looking up so much stuff asking so many questions. So I’m going to give myself maybe about three to six months to really ground that. And then once that’s established, then I’m going back to acting. I have a friend who referred me to a director who is filming a project a series in Tampa, Florida, so I’m excited about it and reading the script. It’s an action packed TV series. I want to get my fighting skills down. Yes, I’m prepared. I’m ready.”

You can also view the full interview here.