Los Angeles, CA (The Hollywood Times) 2/27/21 – There’s no question about it: Blu Del Barrio simply is the living embodiment of Gene Roddenberry’s vision of the future. Gene often spoke of what he wanted for Star Trek, and one of those things was an expansion of consciousness surrounding gender identity. Identifying as Nonbinary and by extension, Trans, Blu tells me they came out through their role on Discovery and how much it has meant to be able to join this legacy. Season 3 introduced us to Adira and Gray, partners in life who share a consciousness by the end of the season.

When speaking more in detail on the subject of coming out as nonbinary through the show, Blu says their parents are learning more and more what it means about day by day and are open to it, which is of course wonderful to hear. Many people still don’t seem to want to understand why these two characters have been brought into the Star Trek universe. They claim the showrunners are simply pandering to the teeming throngs of social justice warriors out there with all this pesky inclusion and diversity (wasn’t it Roddenberry who coined the phrase “Infinite Diversity in Infinite Combinations”?).

“Star Trek has always made a mission of giving visibility to underrepresented communities because it believes in showing people that a future without division on the basis of race, gender, gender identity, or sexual orientation is entirely within our reach,” said Michelle Paradise, co-showrunner and executive producer. “We take pride in working closely with Blu del Barrio, Ian Alexander, and Nick Adams at GLAAD to create the extraordinary characters of Adira and Gray, and bring their stories to life with empathy, understanding, empowerment, and joy.” While Blu is quite aware of the shade that the new Trek shows are getting from certain other wings of the Star Trek fandom, they say the negative vibes are easily assuaged with a delightful evening of D&D with their fellow Disco castmates. According to Anthony Rapp, who plays Paul Stamets, one of Adira’s closest companions on the show in an almost Dad, sort of an Uncle-y way, he’ll be taking the DM reins very soon and is in need of your tips. Blu feels very comfortable on and offset in large part due to how professional and how kind everyone is to each other. It makes the nerves just melt away! Whatever some may think of this brave and bold new Star Trek, it’s certainly going where no one has gone before!

Tweet away, D&D lovers! Don’t leave Stamets hanging as they did in Season 2!

When talking about their background, Blu humbly credited their acting teacher for providing such great mentorship and guidance in the craft. Discovery takes us on this incredible voyage of exploration into gender expression and the self that we haven’t quite seen before-at least not that I can really recall. The way Adira absorbs Gray is distinctly new to me. If that’s not Star Trek, then I don’t know what is!

You can find Star Trek: Discovery on CBS All-Access/Paramount+. Make sure to get caught up before next season starts. It’s going to be epic! Special thanks to Blu Del Barrio for participating in this interview. I look forward to following Adira’s gender-bending mind journey even more in Season 4! 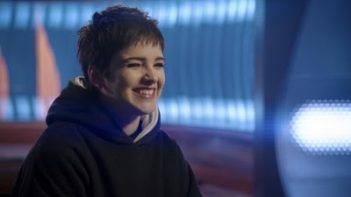