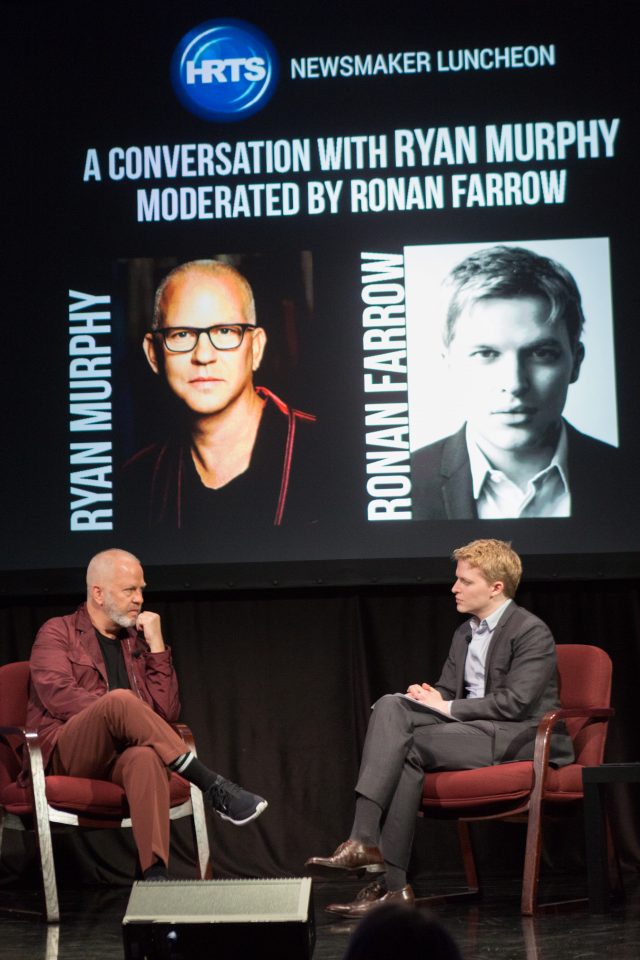 Beverly Hills, CA (The Hollywood Times) 7/18/18 – “Tell me what you don’t like about yourself,” said Pulitzer Award-winning journalist to Peabody Award-winning (and Emmy, and Golden Globe…) producer Ryan Murphy, echoing the signature question of Murphy’s hit show Nip/Tuck. The answer gave a hint as to why Murphy has become the most successful TV writer/producer of the 21st Century, boasting a $300 million dollar deal at Netflix. The two were seated onstage at the Beverly Hilton, talking informally at the latest Hollywood Radio and Television Society Newsmaker Luncheon. 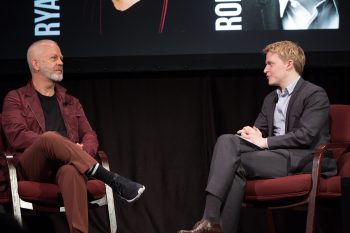 “I’ve always suffered from restlessness and ambition,” said Murphy, “and too much passion. It’s the thing that tortures me yet it’s the thing that has given me my life. Everything is life or death for me; it was that way when I was 4, and continues to be that way.”

As an example, Murphy described his day to Farrow: Worked on three of his own scripts, read the first draft of a script for a new show, gave notes on the producers’ cut of an ongoing show, gave notes on an original song for an upcoming Netflix series… and all of this before noon. Calling Murphy “driven” is an understatement. The same is true for lawyer-turned-diplomat-turned-investigator-turned-documentarian Farrow, who at age 30, has accomplished more than most people will in a lifetime. Without Farrow’s drive and courage, Harvey Weinstein might still be assaulting actresses in hotel rooms. The two found a warm conversational connection.

The HRTS invited Farrow to interview Murphy on July 18 to get a sense of where the industry is going, in Murphy’s view. As one of the big names jumping from broadcast to streaming, he seemed to them to have a finger on the pulse of industry trends. To Murphy, the most significant future trend is the widespread embrace of topics that once were niche, such as his transgender-focused drama Pose on FX.  To that end, he has created an initiative he calls “Half”: Half the directing slots on his productions (with an eye toward half of all production jobs) are to be offered to women or minorities.

“It came from a place of deep shame,” said Murphy. “We were doing the ‘Marcia Marcia Marcia’ episode of [American Crime Story; The People vs] OJ – I had a female director, and she broke her leg. I stepped in, and I think I did okay, but it would have been so much better if it was directed by a woman. And I thought, ‘What the f*** is wrong with me that I don’t have 15 women on my speed dial that I could have called?’”

He looked at his then roster and realized only 15% of the directing slots were occupied by women. Two years later, the number is 65%.

“It’s the best thing I ever did and I’m appalled that it took me so long to figure it out,” says Murphy, adding that as a gay man who knows what it feels like to be marginalized, he should have known better. It is, he believes, also better for the final product. Performances noticeably improve.

“Women directors listen better. They are compassionate. Female actors on my show say that when they’re being directed by a woman, they feel that they can take more chances, that they can try stuff, because they feel safe.”

One could note that it’s all very well for two men to sit onstage under the camera lights and bemoan the plight of under-represented women, when the HRTS certainly has the ability to invite actual women to speak. But both Murphy and Farrow have proven themselves powerful allies, so one supposes it’s a step in the right direction.

“I’m interested in the idea of showrunning as advocacy,” says Murphy. “I’ve had my enfant terrible days of juvenile acting out and narcissism. What I’m really trying to do now is bring something out into the world that is positive.”