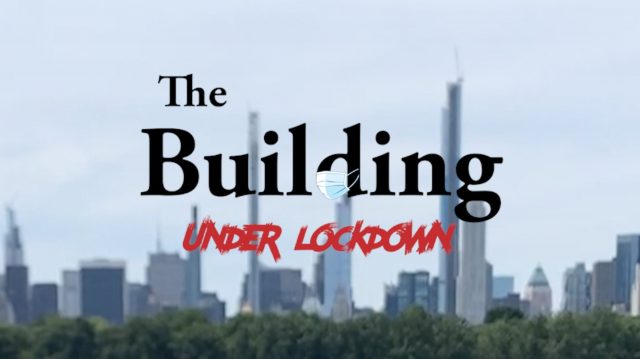 THE BUILDING: UNDER LOCKDOWN

What has the pandemic taught you about the power of creativity?

Nothing I didn’t already know. But I remain awed by it. In my life trying to create something has been consistently very healing for me. And every life experience offers itself up to an artistic rendering of some kind. At least, to me.

Why is New York the best place in the world for creative minds?

I don’t know if I believe in an objective “best” place, but what I love about New York is that, in Manhattan, you can walk almost anywhere. For an absolute voyeur, like myself, New York is really the greatest place on earth for people-watching and eavesdropping. There are like stories, stories everywhere. It’s a chaotic, cacophonic polyglot. As Truman Capote said, the only true metropolis. Of course, it was better before the corporate takeover, but it’s still pretty damn good.

Tell us about The Building: Under Lockdown. What was your inspiration?

It’s part documentary, and that aspect is entirely due to the brilliant camera work of Jesse Green who lived in New York during the first and most brutal part of the pandemic and was taking photographs and live shots of different places all around the City were woven into the show. The narrative is based on real events. But the show is a work of fiction, and it’s based on my play, The Building, which was inspired by the experience my wife, Alex, (who plays Mallory in the show) and I had of living in a wonderful, old Riverside Drive apartment building for a few years when we were younger. Being from Kenova, West Virginia, I’ve always been kind of a Yahoo, and I learned so much from the building’s residents – the volume and range of these people completely inspired me – Jewish refugees fleeing Nazi Europe – lots of artists and academics – as well as new artists like us – then came the arrival of the rich – then the super-rich – and this came to dictate the future of the building, of course. But I developed the play over a period of five years at the Lark Playwrights’ Development Center. It followed the life of the play’s seven characters over a period of about fifteen years. Structurally, it’s a kind of theatrical collage.

I’d had numerous workshops and readings of the piece, but I could never find a home for it though I did receive a few apologetic rejections. Like, “We really love it, but we’re not doing it. Let us know what happens with it.” But Anne Hamburger told me she always loved the play and wanted En Garde Arts to present a Zoom reading of it, so I was hip to that another reading, why not? – this was really early on in the pandemic – like the second week which at the time seemed so long. But at the read-through, I got really frustrated because it became apparent really quickly that the Zoom medium is not a theatrical one, so I stopped the rehearsal and assured everybody that I loved them, but that I could not stand to hear any more of the play. And I wrote it. But I just hated it. And I told them that Zoom seems more like television than it does theatre. Give me a week or two and let me come up with something more suited to that medium. And we all decided we wanted the action to take place in the moment we were living through – the COVID quarantine. The whole company enthusiastically agreed to that before I even went to work re-working and re-imagining the piece. And that’s pretty much how it all came to be.

What were the dynamics of shooting a show by Zoom?

At first, it was weird. Then it was just like doing anything else. I’ve never worked in film, but I’ve done a lot of theatre and a little television, so the dynamics were very similar – we were all just in little boxes. But everybody was reliably crazy, you know. In the most wonderful way.

Share with us how the show explored unfamiliar and necessary methods to craft the best presentation.

We definitely learned stuff working in this hybrid form of “Zoomavision” – because I thought, OK, this is like a radio play with boxes, but then in rehearsal – we realized, no, it’s not. Then we thought, OK, it is like film or television, but then, no.

Neither of those either. Then Jodie Markel and I were watching actors rehearse a scene on the very first day of shooting – she and Jesse co-directed – and the camera demanded more than just a dead-on direct address – that was really boring – and then it became clear that the actors’ physical lives would create all the motion and visual fluidity we’d ever get on the screen. Because the Zoom camera does not move – so no angles, close-ups, coverage. And all of our actors are from the theatre, so they’re all totally accustomed to telling stories with their bodies. Because that’s what you have to do when you act on the stage. So we came to think of “Zoomavision” as a kind of conflation of both the theatrical and television forms, and we tried to utilize that knowledge in the writing – and the acting – for the show. And now, I’m gonna ask Jesse to weigh in on some of the ways he had to innovate in order to deliver a show in this socially distant world.

FROM JESSE GREEN: The basic challenge was making a TV show without ever entering a studio, so we had to figure out the best production tools available to us in our homes during the pandemic: webcams, green blankets, or shower curtains (for background screens), internet connections, and iPhones. Oh. And none of us could ever be in the room at the same time. So one of the biggest issues was framing eyelines in a way that makes it seem as though a couple of actors in a scene are actually in the same room.

Currently, consumer technology is good enough to allow us to create an entire fictional building by using a combination of live backgrounds(actors’ kitchens, living rooms, or bedrooms) and fake backgrounds we’d insert via green screens, so we’d created several sets and figured out a way for the actors to interact with one another in them, but the set-ups often took longer than the actual shots. And the actors were pretty great sports about it. Most of the time. We really improved our skill set as we went along.

Is the Building Under Lockdown really about The Building of Creative Minds in NY?

I don’t know. No more than any other show. I don’t think so. Challenges always come up – regardless of the level of production. And ideally, one always learns – “builds.” But this was just a particular time – all made a thousand times worse because Donald Trump was President of the United States – so there was this weird dysphoria that had permeated every aspect of our existence – not to be neo-Platonic or anything – but the whole society – the world was sick – deathly sick. It becomes metaphoric, I think, ultimately. Or certainly can be. The darkest period of our lives was not just the COVID-19 Pandemic but the Trump presidency – which may prove to be more damaging even still. I mean, almost every Republican in the US House of Representatives voted to overthrow a national election. This is the most terrifying thing that has happened in my Lifetime.

What did you enjoy the most?

The community that emerged. People who work in theatre, television, film – all the performing arts really – music, dance – we’re really people/ people. We rely on each other to do our work – we inspire each other – challenge each other – encourage one another along. So it was great fun and just a relief to have a reason – to do the hang – make stuff up – figure out some work. And come away with new friends. It was really an amazing experience.

Part documentary, part scripted show, The Building: Under Lockdown is a five-episode series. What can we expect in the upcoming months?

Well, we’re done with The Building: Under Lockdown, but Jesse, Jodie, and I all really loved collaborating with one another – so much so that we created a company, The Blue State Media Group with Anne, and we’re definitely hoping to develop and produce some stuff. We tried to do a kind of intellectual talk show before the election with my favorite professor as an undergraduate at Columbia, a Buddhist scholar, but that didn’t work out – he completely resisted anything that smacked of a structure.