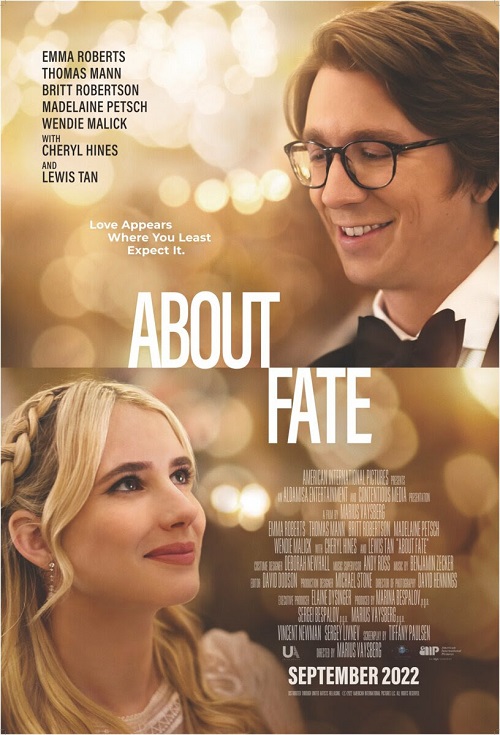 When both of their engagement proposals are a bust, hopeless romantics MARGOT (Emma Roberts) and GRIFFIN (Thomas Mann) find themselves together on New Year’s Eve after a bout of fateful events. Both believing in true love, they set out on a magical and comedic journey together, only to quickly realize that the love they’ve been searching for this whole time might be right in front of them.

Margot Hayes and Griffin Reed may well be the perfect couple. The only trouble is they’ve never met and they’re both about to tie the knot with someone else. But all that is about to change when fate places them in each other’s lives and opens their eyes to true love.

A great comedy movie about a gal and a guy, romance, a pink carnation colored coat, a key, the universe hands you something and FATE.  You start out watching this film and start to realize these two people are in a relationship, but wait, I guess you will have to watch the movie to see about that.  I really like that Wendie Malick is in this film, great actress and plays the mom of the guy (Thomas Mann).  Later you see another great actress, Cheryl Hines, who is the mother of the gal (Emma Roberts) and has a great name: Judy!  The writer did an excellent job with the twist in the story, and each character has serious and comedic lines.  The movie is truly worth the price of your ticket, so get your girlfriends together and make it a girls night out. It is also a great film to take the love of your life to see, as it will make you love and appreciate that person even more.  You can also just watch it at home digitally on the couch too!  Judy Shields, The Hollywood Times

“Every so often, if you’re paying attention, the universe delivers something unexpected. Call it destiny or fate, it’s one unique moment that just might change everything. That is, if you let it…” Griffin Reed

Things are about to get complicated for Margot Hayes (Emma Roberts) and Griffin Reed (Thomas Mann).

With Christmas in her taillights and her sister’s (Britt Robertson) New Year’s Eve wedding fast approaching, Margot is convinced her boyfriend – the drop-dead-gorgeous (and narcissist supreme), Kip Prescott (Lewis Tan) – is about to pop the question. No matter that they’ve only been together 3 months.

No matter that her reliably blunt mother, Judy (Cheryl Hines) – who, like the rest of the family, has yet to even meet Kip – thinks Margot is simply setting herself up for (another) disappointment. Yet she heads to dinner to meet her beau and is ready to say “YES, YES, YES”.

But as fate would have it, at the same restaurant is where Griffin Reed is planning to propose to the woman of his dreams, the drop-dead-gorgeous nightmare, Clementine, online influencer and local model (she’s the Fletcher’s Mattress Girl and the Muffin Land Bakery Queen), that very same night; New Year’s Eve-Eve being the date his overprotective mother (Wendie Malick) said, ‘I do,’ to Griffin’s dad.

Of course, things go anything but according to plan that evening. And with their respective dubious relationships going awry, it’s ultimately down to Margot and Griffin, two perfect strangers – and two perfect soulmates thrown together by fate – to see what’s staring them in the face… Namely, each other.

“They felt right together,” says director, Marius Vaysberg (The (UN)perfect Guy), of the palpable big-screen chemistry between leads Emma Roberts and Thomas Mann in About Fate, which was filmed in and around Boston last summer over the course of 26-days.“There’s this simplicity and humanity about both of them that they connect in a way,” explains the director. “Because of the pandemic, it was hard for the three of us to meet [before filming], so it was a risk that I had to take. But it felt like it was going to work. And it sure as hell clicked as soon as the three of us met in Boston.”

The secret to a brilliant romantic comedy is simple enough according to screenwriter, Tiffany Paulsen, here marking her first collaboration with Marius Vaysberg and her third with Emma Roberts (following Netflix’s Holidate and Warner’s Nancy Drew).“You have to want the couple to kiss,” she says with a gracious tip of the hat to her About Fate director for bringing that final element to the screen. “Marius is genuinely one of the loveliest people I’ve ever worked with,” says Paulsen. “He brings a unique warmth, humor and openness that I’ve never experienced with a director. He absolutely knows what he’s doing and what he wants, but has no ego in being open to ideas… I loved working with Marius

A questioned asked to director Marius Vaysberg: What do you hope audiences take away from the film? “That magic is right around the corner. Just keep the faith. That’s basically it.”

This film is not yet rated