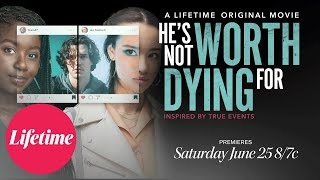 Los Angeles, CA (The Hollywood Times) 6/17/22 – “He’s Not Worth Dying For” is a Lifetime movie based on actual events. Two young women, one a soon-to-be valedictorian with plans of pursuing a career in veterinary medicine (Hilda Martin) and the other a fashion and beauty influencer with a growing following who watch her every move via social media (Rachel Boyd). Although these two come from quite different walks of life, they share one commonality: a guy named Jake, whom they are both dating unknowingly. The drama heats up when the two discover each other, causing an intense rivalry. The jealousy leads them to use their social media to attack one another. The question is, what will happen when Grace and Isla meet face to face? And is Jake (Lachlan Quarmby) worth dying for?

During Lifetime’s Summer Press Day, the cast was asked if they viewed their real life and social media as the same or if they saw it as two separate worlds. What they had to say; Rachel Boyd replied, “Social media is real, but also fake because it’s taking a person and letting them choose what they want to highlight and how they want to be perceived in the world. And what you see on social media is not a real accurate representation of a real human being that is full and flawed. What we wanted to tackle in the movie is that people often blur those lines together.” Lachlan Quarmby agreed with Boyd and feels like “everything should be done in moderation. Your social media could represent who you aspire to be; the goal is to manage it correctly and not lose sight of reality.” Hilda Martin says she had a challenging time being the same person until she realized that in the social media world, it’s not possible to be fully you unless you want to be torn apart. It’s more about fitting into society’s social norms and what your followers want to see.

The movie is set to premiere on Saturday, June 25, at 8p.m, Eastern on Lifetime Network.