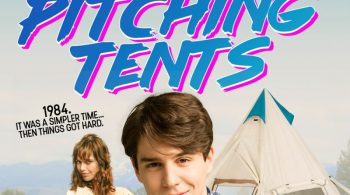 Sound advice for any teenager trying to figure out life after high school in 1984. But for aspiring artist Danny Whitaker (Michael Grant), working for his father in the local metal factory is a puzzle piece laden with jagged edges. His blunt spoken guidance counselor, Warren Mulligan (Jim Norton) advises that he should enroll in college as a means of protecting his own job.

In order to come to a sound decision, Danny and his pals, Todd (BooBoo Stewart), Scott (Jonathan Lipnicki), Phil (Marco James Marquez) and their stoner “friend,” Stash (Spencer Daniels) embark on a trek to the annual “Trout Camp” fishing trip, but also a keg party set up in the middle of the woods. It’s here that Danny crosses paths with Alison (Samantha Basalari), a member of the famed “Goddess Camp” who attempts to help Danny realize what’s most important in life; conformity or pursuing what’s in your heart. 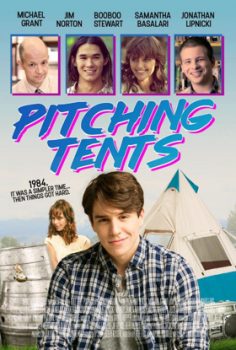 Set in the nostalgic early 80’s, “Pitching Tents” is one of those rare movies that actually feels like a piece of the period in which it is set. Comedian Jim Norton is a definite scene stealer with his portrayal as a self serving high school counselor with a raunchy heart of gold. Another powerful performance is delivered by Eric Allan Kramer (American Wedding) as Danny’s father, Bruce.

With it’s lewd and satisfying humor, hilarious camaraderie amongst close friends, sight gags and heartfelt purpose, “Pitching Tents” is definitely an experience not to be missed.

Available to stream on HULU on June 1st.