Select programming will also be available to stream on PBS.org and the free PBS App. 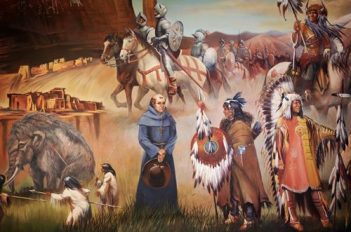 Southern California’s Autry Museum of the American West is working to recontextualize a large mural, dating from the Disney Imagineers-designed museum’s opening in the 1980s. The mural depicts a widely accepted mythology of the West, which prioritizes white settler colonialism at the expense of other perspectives including those of Native Americans, Black settlers, Asian Americans and women. Discussions around civic memory and the renovation of a long-term gallery spark a larger conversation about this piece and its role in the museum. Produced in partnership with the Autry Museum of the American West. Directed by Anna Rau and Corbett Jones. Produced by The Range.

Next up for Artbound is “Mustache Mondays”  on November 17th

For a generation of multicultural Queer artists, gay nightclubs were a haven for seeking communion and solidarity. This film examines the history of these spaces and how they shaped the Queer cultural fabric unique to Southern California. One particular event, “Mustache Mondays” was a weekly destination for over a decade and became a seminal event for the Queer art community in the early 2000s. Directed by Marianne Amelinckx. Produced by The Ladies Room Agency.

KCET, Southern California’s flagship PBS station and home for award-winning public media programming, previously announced the return of the KCET Original Emmy® award-winning arts and culture series ARTBOUND. The twelfth season of the series kicks off with an examination of one of the pioneers of Chicano rock ‘n’ roll, Rubén Funkahuatl Guevara. Previous episodes from the new season included the making of The Industry’s groundbreaking opera Sweet Land, the life of renowned ceramicist Helen Jean Taylor and an exploration of the Desert X 2021 exhibition. ARTBOUND examines the lives of artists and movements in California and the contributions they have made to American culture today.

You can catch up on all of the previous shows via streaming at kcet.org/artbound

For updates, follow @KCET and #Artbound on social media.

The critically acclaimed weekly television series and online destination ARTBOUND captures the spirit of the burgeoning arts and culture community in California and explores how it’s shaping California as the creative capital of the world. The KCET Original series explores and illuminates the cultural issues of our times, providing critical in-depth analysis of how arts and culture affect society. The series and the online stories that are found at kcet.org/artbound are the result of cultural tastemakers throughout the region and collaborations with LA’s top cultural institutions. Since its inception in 2012, the series has earned high industry praise including Emmy® Awards, Southern California Journalism awards, Golden Mike awards and a National Arts & Entertainment Journalism award, among others. ARTBOUND has been recognized with the prestigious ASCAP Foundation Deems Taylor / Virgil Thomson Multimedia Award for outstanding music.

KCET is s part of the donor-supported community institution, the Public Media Group of Southern California, which was formed by the merger of PBS SoCal and KCETLink Media Group. As one of Southern California’s two flagship PBS stations, KCET is on-air, online as well as in the community, and plays a vital role in the cultural enrichment of Southern California. KCET offers a wide range of award-winning local programming as well as the finest public television programs from around the world. Throughout its 55-year history, KCET has won hundreds of major awards for its local and regional news and public affairs programming, its national drama and documentary productions and its website, kcet.org. For additional information about KCET’s original productions, web-exclusive content, programming schedules and community events, please visit kcet.org. KCET Originals and PBS programming are available to stream on the FREE PBS App on iOS and Android devices, Roku, Amazon Fire TV, Apple TV, Android TV, Samsung Smart TV, and Chromecast. KCET is also available to watch live on YouTube TV.