When the water in a popular tourist spa at the heart of a local town’s economy is discovered to be contaminated, powerful people have to decide whether to put the health of visitors above the town’s commercial interests. Geer’s adaptation resets the play in the small town of South Fork, South Carolina in the 1980s, where issues of race serve to further compound the economic concerns at stake.

“Bringing the great classics alive for our audiences by highlighting their relevance to the times we live in has always been our mission at Theatricum,” says Geer. “Ibsen is considered the father of modern drama, and his canon of plays is as pertinent today as when he wrote them in the 1800s.”

Ibsen initially wrote the play in response to the public outcry against his previous play,Ghosts, which challenged the hypocrisy of 19th-century morality. According to Ellen Mortensen (Ibsen Studies v.7, 169), the words “scandalous,” “degenerate” and “immoral” were hurled at both Ghosts and its author because it openly discussed adultery and syphilis. Therefore, An Enemy of the People tells the story of a man who dares to speak an unpalatable truth — and is punished for it. Whistleblower Dr. Thomas Stockman has discovered that the town baths, which keep the town economically afloat, are polluted. Conflict arises when the town mayor, Stockman’s brother (his sister, in Geer’s adaptation), wants to suppress Thomas’ discovery from the public. 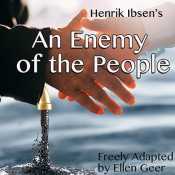 The production will perform in repertory on the main stage with currently running productions of Shakespeare’s Twelfth Night and A Midsummer Night’s Dream. Orson Welles’Moby Dick–Rehearsed, adapted from the novel by Herman Melville, joins the season beginning June 8, and Thornton Wilder’s Pulitzer Prize-winning play, The Skin of Our Teeth kicks off on July 13. All five productions will continue to play in repertory through Sept. 29. A sixth production will open Aug. 17 on the smaller stage in the theater’s intimate S. Mark Taper Pavilion: The Gin Game by D.L. Coburn — another Pulitzer Prize winner — will star long-time Theatricum company members and real life husband-and-wife team Alan Blumenfeld and Katherine James in a co-production with the Sierra Madre Playhouse.

Unlike most theaters in the L.A. area that stage continuous runs of a single play, Theatricum, using a company of actors, will perform each of the plays in repertory, making it possible to see all six plays in a single summer weekend.

Theatricum Botanicum has been named “One of the 50 Coolest Places in Los Angeles” byBuzz magazine, “One of Southern California’s most beguiling theater experiences” by Sunset magazine, and “Best Theater in the Woods” by the LA Weekly. “The enchantment of a midsummer night at Theatricum Botanicum [makes it] crystal clear why audiences have been driving up into the hills since Theatricum’s maiden season way back in 1973. Summer Shakespeare doesn’t get any better than this,” writes StageSceneLA. Says Los Angeles magazine, “The amphitheater feels like a Lilliputian Hollywood Bowl, with pre-show picnics and puffy seat cushions, yet we were close enough to see the stitching on the performers costumes. Grab a blanket and a bottle and head for the hills.” In 2017, Theatricum was named “one of the best outdoor theaters around the world” by the Daily Beast.

Theatricum’s beginnings can be traced to the early 1950s when Will Geer, a victim of the McCarthy era Hollywood blacklist (before he became known as the beloved Grandpa on The Waltons), opened a theater for blacklisted actors and folk singers on his property in Topanga. Friends such as Ford Rainey, John Randolph and Woody Guthrie joined him on the dirt stage for vigorous performances and inspired grassroots activism, while the audiences sat on railroad ties. Today, two outdoor amphitheaters are situated in the natural canyon ravine, where audiences are able to relax and enjoy the wilderness during an afternoon or evening’s performance. Theatricum’s main stage amphitheater sports a new and improved sun shade for increased audience comfort, installed with support from the Los Angeles County Board of Supervisors and the Ralph M. Parson’s Foundation. Theatricum is the recipient of multiple awards, including the Margaret Harford Award for “sustained excellence,” which is the Los Angeles Drama Critics Circle’s highest honor.

The amphitheater is terraced into the hillside, so audience members are advised to dress casually (warmly for evenings) and bring cushions for bench seating. Patrons are welcome to arrive early and picnic before a performance.

An Enemy of the People opens on Saturday, June 22 at 8 p.m. and continues throughSept. 28. Tickets range from $10 – $42; children 4 and under are free. Will Geer’s Theatricum Botanicum is located at 1419 North Topanga Canyon Blvd. in Topanga, midway between Malibu and the San Fernando Valley. For a complete schedule of performances and to purchase tickets, call 310–455-3723 or visit www.theatricum.com. Visit Theatricum on facebook: www.facebook.com/theatricum. Follow us on twitter: @theatricumand instagram: @theatricum_botanicum.