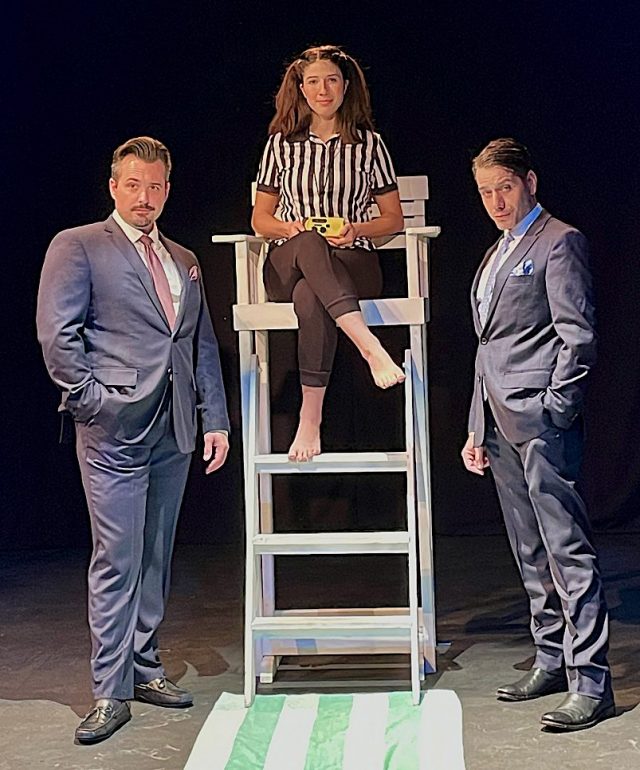 Los Angeles, CA (The Hollywood Times) 11/11/21 – Currently on stage at the Atwater Village Theatre in Los Angeles is yet another play by Canadian playwright Daniel MacIvor – Never Swim Alone – staged over the weekend by the Open Fist Theatre Company under the direction of Amanda Weier. In the slyly witty and unexpectedly suspenseful Never Swim Alone, two men, Frank and Bill (Bryan Bertone and Dylan Maddalena) are locked in a ruthless competition of one-upmanship under the watchful eye of “The Referee” (Emma Bruno) — a young woman with a secret connection to the boys these men used to be. Reviewing Open Fist’s 2020 “Rorschach Fest” production, Stage and Cinema called Never Swim Alone “a delightful work. Its structure is inventive and fresh; its charming cast of three is quick-witted and engaging.”  Never Swim Alone is a short play that is running as a companion piece to Daniel MacIvor’s The Soldier Dreams for four weeks, from October 30 through November 21, giving audiences the chance to experience both plays in one evening.

When asked about why she chose to stage MacIvor’s Never Swim Alone, Amanda Weier replied: “I simply love this play. I first saw it in Chicago in the late 90s. It was an off-night offering and I can’t recall for certain the venue — I think it was one of Steppenwolf’s auxiliary spaces … It could have been Victory Gardens. What I know for certain is I and about 20 other patrons who’d never heard of the writer, but wanted to support the director, climbed some narrow stairs and entered an intimate black-box space where we subsequently had our minds blown by this gem that is at once experimental, but also completely accessible.” While Never Swim Alone dates back to 1991 when it was written by MacIvor, its presentation of male competition and one-upmanship remains topically current.

With a sense of existential pointlessness to the edge of absurdity, we see and hear two men talking in tandem over each other. Their ruthless competition is being judged by the young woman on the beach with a secret connection to the boys these two men used to be. As adult men, we are thrust into the gamesmanship of male braggadocio and the vacuity of language reminiscent of the endless verbalizing of Samuel Beckett’s talky characters. Lurking in the background is the failure of both men to pay attention to the girl they once knew, as they swim to the “point” at a beach and forget the reason they were competing. At that “point,” we are asked to consider why we compete to the point of eliminating a competitor.

Never Swim Alone is a short play but feels like a rapid-fire tennis match of language. It places a considerable demand on two male actors, Frank and Bill, in the play. Both Bryan Bertone and Dylan Maddalena handle their delivery in tandem well, making their performance so funny. But underlying the humor of this absurd competition is a darker truth and the playwright leaves us to ponder its meaning