Los Angeles, CA (The Hollywood Times) 8/3/21 – Arriving at several Laemelle Theatres on August 6, is Malgorzata Szumowska’s Never Gonna Snow Again (Sniegu juz nigdy nie bedzie, 2020) is a Polish-German black comedy that mixes mordant humor with a weighty critique of the illusions of the Polish bourgeoise living in their McMansions in a gated community outside of Warsaw. Szumowska’s film was Poland’s submission for Best International Film at the Oscars 2020 and is being distributed in the U.S. by The Match Factory. Her previous films Body (2015) and The Other Lamb (2019) were also comedies full of social satire. Never Gonna Snow Again features Alec Utgoff as Zhenia, a Russian-speaking immigrant from the Ukraine who works as a masseur in Poland and becomes a guru-like figure in the wealthy gated community of his Polish clients. Szumowska has teamed up with her regular cinematographer Michal Englert as co-director, returning to the playfulness of her earlier work as they present a satire of suburbia that, at times, also has the quality of a fable somewhat reminiscent of Pasolini’s Teorema (1968) and aspects of David Lynch’s Twin Peaks.

Never Gonna Snow Again is a piercing, and at times outrageously funny, satire on the showy emptiness of modern capitalist society. This is counterbalanced with an underplayed, profoundly affecting tale of one boy’s longing for his mother and the lasting shockwaves of the 1986 Chernobyl disaster. Alec Utgoff is hypnotic in the lead role as Zhenia. Dressed in a black vest, trousers and white socks while putting his magical hands to work, he both resembles and has the grace of a dancer in the muscled poise that he brings to his performance. 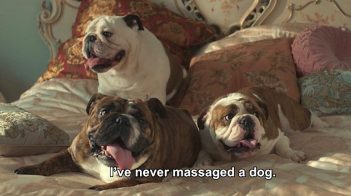 The ill effects of being born seven years to the day before the Chernobyl disaster somehow give Zhenia the powers to heal, alleviate pain, stress. But there was one person whom he was unable to save. And therein lies the rub for Zhenia who instead puts his talents to good use in the everyday. An endless procession of cookie cutter homes in suburban Warsaw with ever-increasingly pretentious doorbell rings, and housewives who lust after the handsome young man, Zhenia remains diffident, polite and – for the most part – detached from their affairs, drugs, drinking and neighborly one-upmanship. 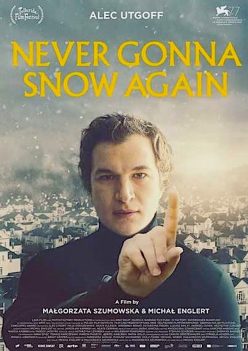 The action centers on Zhenia, the Ukrainian emigre to Poland – something almost everyone seems keen to remind him of. He plies his massage trade around a wealthy gated community. It’s the sort of well-heeled but competitive place where the jangle of one-upmanship can be heard in the competing musical doorbells and door welcome wreaths that are so elaborate, they have been stripped of all joy, and which are a source of recurrent comedy throughout.

With his hypnotic massage and magical hands, he seems to be able to slow down time (literally), and make these people stop, think and change. But he remains a bit of a cipher, unable to fill the void in his own life. The massage sessions seem to return Zhenia into the woods near Chernobyl from whence he came in the film’s evocative opening moments, the visions each person has under Zhenia’s hypnotic spell humble them, provide a life-affirming clarity which far outweighs an hour’s rub down.

The action unfolds as Zhenia moves from the mini-world of one home to the next, each door opening onto a self-contained universe of family foibles. One houses a woman (Weronika Rosati) whose every furnishing is dedicated to her dogs, another a clan where the husband (Lukasz Simlat) is slowly succumbing to cancer. Elsewhere there’s a caustic, drug-taking widow Ewa (Agata Kulesza) still dealing with lasting grief and a fourth features Maria (Maja Ostaszewska), a harried housewife with children, who finds respite in wine and flirtation. Into these versions of chaos steps Zhenia – whose Zen-like calm reflects his name. Whether he actually has some sort of healing powers is left ambiguous, but many of his clients certainly believe that. Szumowska and Englert’s vignette-based script risks caricature in its depiction of these directionless elites, but there is an essential ring of truth in the way they simultaneously treat Zhenia with fawning, quasi-erotic need and micro-aggressive disdain: They complain in his presence about immigrants before adding a hasty “but you’re different” caveat or, in the film’s broadest comic lurch, instructing him to massage their gassy, slobbering pet dogs.

Never Gonna Snow Again is so rich in sociopolitical allusions and delicate modulations of mood that this film feels a bit like a hypnotic trance. Glimmering, golden-lit flashbacks to what Zhenia alleges was his childhood in Chernobyl keep threatening to crack his character while keeping his secrets just beyond reach. His massage technique sends his clients in a kind of trance that visualizes the characters’ various states of hypnosis in their own forests of the mind. The film’s ending leaves one to wonder if this was the visitation of a supernatural being or just a clever charlatan. As the reports on global warming are heard on the television in the background, it seems that winter will never really be what it was before Chernobyl. It’s “never gonna snow again.”