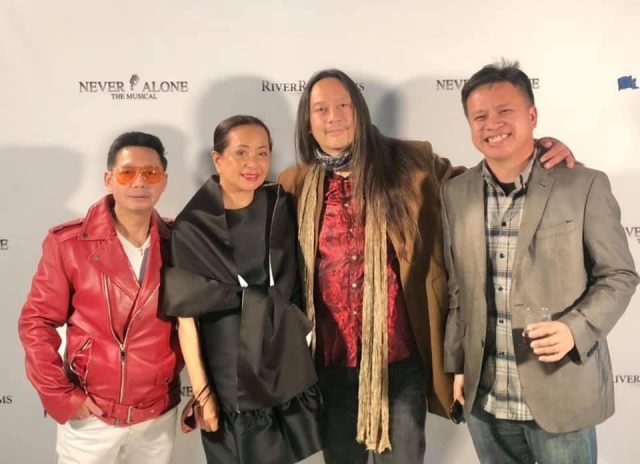 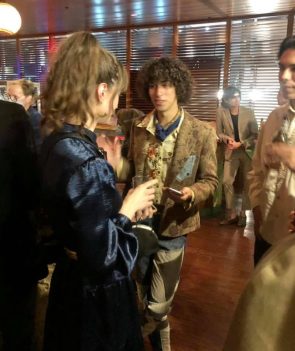 Los Angeles, CA (The Hollywood Times) 10/20/21 – RiverRock Films’ “Never Alone” premiered at the Westside Pavilion Landmark Theaters to a crowd of mostly cast, crew, and industry professionals. I was honored to be invited by one of the producers who have a heart for promoting Asian film and talent. I was impressed by Filipino American co-director Albert Soratorio who I was able to catch up with before the screening. 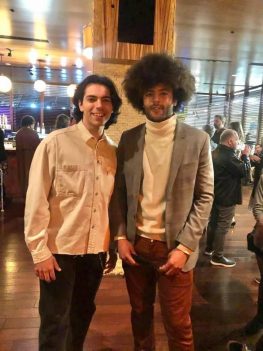 Albert was the half of the directing duo focused on the music.  He shared that this movie actually started out as a musical play and that he also was a musician in the film. I was pleasantly surprised by the depth of musicality in the film. All students and the music teacher in the movie were talented musicians, from female lead Amy’s (Addison Bowman) acapella moments to Daryl Lars’ (Malik Wilcot) display of genre versatility in his first Zoom call with his class, the love for music kept the sonic texture of the film varied and interesting. 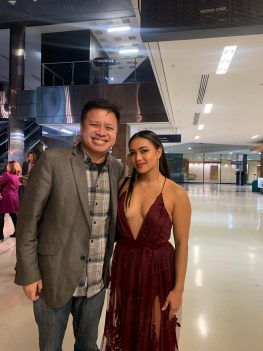 The movie itself had a great underlying message, exploring the effect of the lockdowns on the mental health of our youth. I recently explored this in my latest piece for Washington Examiner, regarding a high school junior football player who had to stop practice for two weeks merely because he got exposed to another classmate who had covid. I spoke at length with his mother who was devastated as her son dealt with declining mental health issues due to lockdown. “Never Alone” captured this struggle and there was a key moment when one of the characters spoke to the principal saying they just can’t talk to adults like their peers, signaling the hunger for peer interaction. 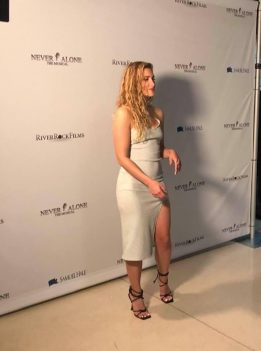 In this movie, inspired by writer Paul Bunch’s teenage children, the backdrop was a Santa Monica arts school with a tight-knit class and friend group of about half a dozen kids who all love music and are unable to interact and collaborate due to the shutdowns. It also happens to interfere with a budding romance between two of the protagonists, Amy and Nate (Amr Nabeel). 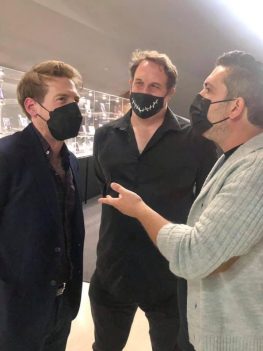 The movie starts with a suicide attempt by one of the supporting characters, Gary (Vicente Cristo). We don’t know if it was successful as it flashes back to March 2020, right before all the shutdowns and the romance between two of the music students as they collaborate on songs for a play.
Funny enough the strongest character was the female love interest Amy’s best friend Brielle. Played by young Filipina/Mexican actress Alex Felix, the character became the impetus for the shy characters all to get together, take risks and move the plot along. Yet we know very little about her. Even at the premiere after-party, it was Brielle’s charisma that exuded. She stole the show with a balance of her beauty, energy, straight-shooting style, and most importantly joyous sense of humor. The movie overall could have used more humor, and especially between the romantic couple.
Perhaps my biggest critique of the movie is the lack of development of all the characters. It almost seems like the time was spread too thin and we got to know a little about everyone but not enough to become invested in them emotionally. We knew Gary who attempted suicide had an abusive father and was crying for help but we never got to see the depth of that dynamic. What prevented Nate and Amy from developing their relationship amounted to adolescent nerves versus exciting plot twists and turns which this movie needed at least a little more of.
That said, given the script they had to work with, the movie delivered as far as cinematography, editing, and acting.
Set in the beautiful and picturesque Santa Monica, viewers were treated to beautiful bike trail shots with skateboards, surfers, and gorgeous homes. Sweeping emotional shots with sunset backdrops and even the simple shots of the music room in the school were well dressed and shot.
The pacing of the movie was also great. As we progressed through the story I felt nothing lingered too long. But I did feel that the same time in the scenes could have been better served with dialogue that was less cliche, from the young couples’ courtship to the music teacher’s family conflict to the slightly awkward interactions between the reluctant music teacher and his emotionally needy students. It reminded me of another teacher/student’s musical interaction movie, “School of Rock” where the interplay between Jack Black’s character and Miranda Cosgrove’s brought laughter and tears, a standard for a perfect chemistry in a musical movie. Too many times, the group of kids in “Never Alone” stood awkwardly as a strangely unified unit, albeit aloof, versus exploring the individual dynamics that could have deepened our investment in the characters and brought out elements in the context of relationship.
I am very inclined to love this movie due to the strong message of needing to connect outside our Zoom screens, in real life, and it certainly was an entertaining 90 minutes. But the glaring takeaway was how a stronger script and character development could have taken it to the next level. The ideas are great and I hope Paul Bunch and Albert Soratorio continue their work and hone their talent.
In addition, “Never Alone” would be quite interesting as the musical it was originally intended to be, as the music seems to demand a stage itself with all of its range and diversity in genres and flourishes.
That said, a huge bravo, Albert, Paul, and all the musicians and actors involved in this project dares to tackle a timely topic of lockdowns and teen suicides, and also dares to provide clean entertainment that preserves the kids’ innocence and higher ideals of love, friendship, and kinship.