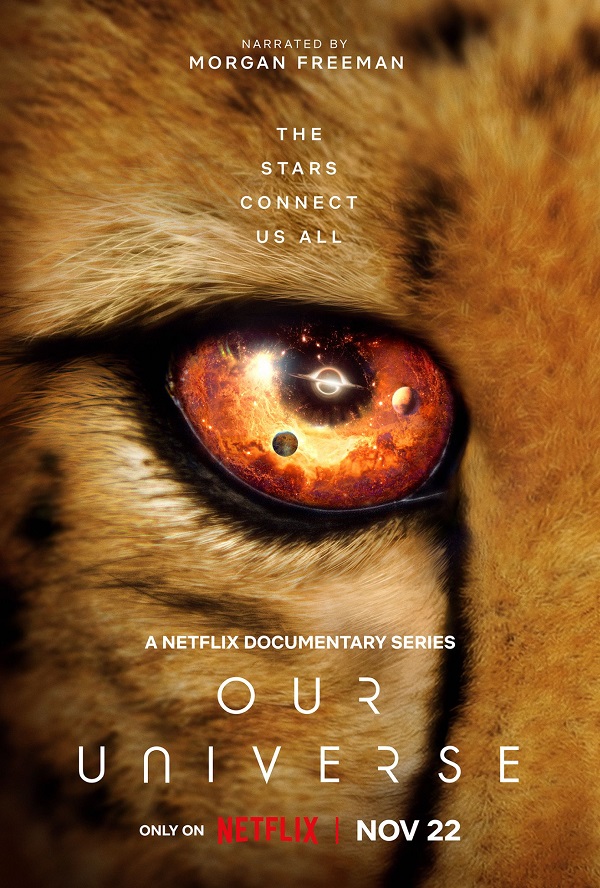 ALL EPISODES STREAMING ON NETFLIX NOVEMBER 22

From BBC Studios and narrated by Academy Award-winner Morgan Freeman, comes this unprecedented six-part series, an epic tale 13.8 billion years in the making. Blending stunning wildlife footage with eye-popping cosmic special effects, it takes viewers on a fascinating adventure to explore the connections that drive our natural world. From the birth of the Sun to the birth of a sea turtle, Our Universe uses groundbreaking animation to dramatize the spectacular celestial forces that generated our solar system, while modern camera and CGI technology bring the audience up close and personal with some of the most iconic, charismatic animals on Earth. Watch the changing seasons impact an Alaskan brown bear and her cubs; learn what a single blade of grass has to do with a hungry cheetah on the Serengeti; soar through the waters of the Southern Ocean as the romance of two penguins underscores the most powerful force in the galaxy. Designed for viewers of all ages, this is the story of how life came to be on this fragile, resilient, irreplaceable planet we call home.

On the dry plains of the Serengeti, Wachini, the cheetah hunts for prey to feed her hungry cubs. The energy she seeks starts its journey many millions of miles away, at the center of the nuclear reactor that fuels every living thing on our planet: the Sun.

In the forests of Gabon, Celeste the chimpanzee waits for her baby to be born. She knows it will take time –but how did time start? Does everything experience time the same way? And is there a force in the universe that can destroy time itself?

In the Alaskan Arctic, brown bear Luna is ready to hibernate for winter. She’s evolved to understand our changing seasons, the result of a cosmic collision billions of years ago that tilted Earth’s axis and made life on our “Goldilocks planet” just right.

On an island in the Great Barrier Reef, Stella the baby sea turtle emerges from her shell. As she sets out on her dangerous journey to adulthood, she’ll rely on hydrogen, iron, and the rest of the 90 chemical elements forged in the Big Bang to survive.

In the Okavango Delta of Botswana, the dry season sends a family of elephants on their annual migration.  They’re in search of water – a cosmic gift, delivered by asteroids, that transformed our planet into the only haven for life we know.

On South Georgia Island, King penguins Rocky and Paloma are destined to meet – and mate. The universe has given these lovebirds all the ingredients they need to flourish, and whether they’re fishing or flirting, it’s gravity that holds everything in place.

BBC Studios Science Unit is an Emmy and BAFTA winning production team with offices in London and Glasgow. The team produces premium content for global audiences and is renowned for combining a unique storytelling approach with technological innovation. Recent successes include for Netflix, the BAFTA and Emmy award-winning Surgeons Cut and the recently launched Anthrax Attacks.