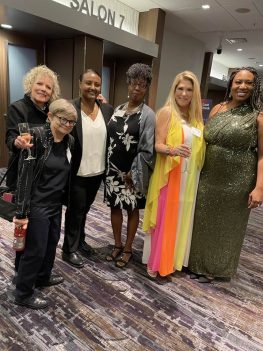 San Francisco, CA (The Hollywood Times) 11/13/22 -The National Center for Lesbian Rights (NCLR) hosted its first in-person gala since 2019 over the weekend, and it was everything we hoped it would be. The organization set up at the Marriott Marquis and Metreon Cityview in San Francisco, and its cornerstone event, the Champions For Justice Dinner + Party, took place on Friday, November 11. The Hollywood Times, longtime supporters of the organization, were media sponsors, with senior editor Valerie Milano representing the publication.

The event, notably held on Veteran’s Day, was especially momentous because it welcomed the NCLR’s new Executive Director, Imani Rupert Gordon, to her very first in-person gala. She joined the organization back in 2020, when the live event was on pause and held virtually for two years instead. Hundreds of generous donors, friends, supporters, and leaders in the LGBTQ+ community joined us for what NCLR called in an official press release an evening of “inspiration, activism, and community.”

Hosted by the incomparable standup comedian Cameron Esposito, it was a vibrant and utterly fulfilling dinner and party, and the bonds felt were made even stronger by the absence of in-person celebrations for so long. Kansas Representative Sharice Davids graciously accepted the Justice Award, while actor and producer Abbi Jacobson, and philanthropist and indie musician Gina Chavez walked away with the evening’s two Voice & Visibility Awards.

Distinguished doctors Morissa Ladinsky and Hussein Abdul-Latif, along with transgender youth advocate Cameron Wright, received the high-profile Courage Awards. The much talked about after party definitely lived up to expectations, with DJs, plenty of drinks, games, food, dancing, and more entertainment, including a medley of songs from Gina Chavez, making it a night to truly remember.

To kick off the evening, LGBTQ members of the U.S. Armed Forces were also welcomed on stage to be honored for their service in observation of Veteran’s Day.

“After several tough years for the LBGTQ community and our families, I am thrilled to be welcoming all of NCLR’s friends and supporters to our 45th-anniversary celebration on November 11 in San Francisco,” noted  NCLR Executive Director Imani Rupert-Gordon in the press release. “Despite the many challenges we have faced over the past few years, we still have much to celebrate, including our historic wins this year on behalf of transgender youth in Alabama and Utah. Even though it is clear there is still much work to be done – including defeating laws like ‘Don’t Say Gay or Trans’ in Florida, we know that our fight for justice puts us on the right side of history. As we gather on November 11 for our Champions for Justice Dinner and Party, we do so knowing that we are stronger than ever and we will continue to forge forward – together. For 45 years, NCLR has been at the forefront of the fight for LGBTQ equality, and for the next 45 I know we will lead with the bravery in our heart that is written into the DNA of the National Center for Lesbian Rights.”

All the award recipients released statements expressing their gratitude for the honor. But one statement stood out to us above the rest – that of trans youth award recipient Cameron Wright’s mother. “I am so incredibly proud of Cameron and the advocacy he has done this year,” Myriam Reynolds said.  “Before March Cameron was not publicly out as a transgender young man and was doing his best to fly under the radar. We were so distressed by what our state leadership was doing here in Texas and decided that he should stand up and fight for our rights.  He went public with a bang and has shown so much courage in advocating for himself and others. I have never been more proud of Cameron as I have been this year watching him speak truth to power.  We are so excited and humbled to be attending the gala and look forward to celebrating Cameron’s courage!”