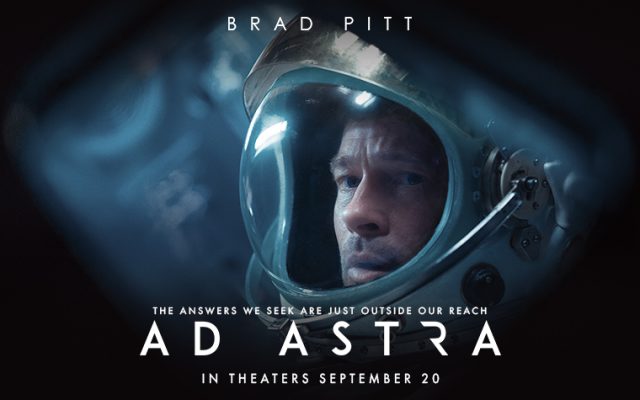 Monday, James Gray, writer, producer and director of the upcoming feature film Ad Astra, along with his friends and partners at NASA gave a multi-layered presentation on the near future of space exploration, which provided the basis of the science and technology in James Gray’s saga.

The afternoon, which started on the Fox Lot in Century City, ended over the Landmark Theaters on Pico Blvd where the film was screened by members of the press and the NASA panelists who helped build the reality depicted on-screen.

Never in a movie has there been a more grounded exploration of our fascination with space and why. In the end, our home, our planet is something we must protect. The farther we stray from home, the more precious home feels to us when we return.  This is true of the house we grew up in, and ultimately the planet which we all call home.   In the end, the big question, the only question, is whether there’s life out there.

Tommy Lee Jones’s character shows how all-consuming that question can be. A question so big, with implications so profound that the possibility of finding the answer could mean more to a person than those they love.  While that reality must not allow us to drop the question, it forces us to continue to face the fact that our technology simply isn’t advance enough to find the answer.

This is the core reality of space exploration. Everything that keeps us yearning for and achieving a little more, while setting us back by leaving us with unfinished business.

This is what is behind every scene, every character and every element of the story that James Gray tells.  Then Gray piles on top of that core, that deep-seeded truth of space travel, all of the current weaknesses of humanity that plague us at this time.  Gray forces us to reconcile whether any level of human achievement and partnership that yields new frontiers will actually change people.

Will we still find ways to steal each new discovery rather than share it?  Can we ever again in our human culture know what it is to accomplish something that the whole world can benefit from? Government conspiracy, corporate greed, the fight for resources, territorial disputes. In James Gray’s story those nightmares do not escape us when we leave Earth.

Then, on top of all that, Gray with the help of two acting icons of our generation tell the deepest of personal stories between a father and son.  One of love and loss, a story of sacrifice for the sake of greater achievement, a story of reputation and family name controlling your life from birth to death.  Lead actor Brad Pitt, who also co-produced the project through his company Plan B, leads us through his eyes on a journey to find a man he hasn’t seen or heard from in decades, his dad.

The father he seeks, played by Jones, is so revered for his achievements that nothing Pitt’s character can do goes without scrutiny coming from his association with a legend. That legend has now become responsible for the potential annihilation of all life on Earth.  In the two of them we (the audience) can immediately trust that our entertainment dollars are in good hands. That the characters they play will be next-level in their complexity. Yet, they’ll display basic human values with unwavering dignity.

Earlier that afternoon NASA, in partnership with the release of this film by 20th Century Fox, presented two panels that helped prepare us for the science and technology advancements we would see in the film.  Every bit of what we got to see in Ad Astra were things that had been presented and discussed beforehand to show the legitimacy of James Gray’s work, and give us all very concrete hope that human advancement is well underway.

It was there that NASA announced that in 2024 a new mission to the Moon would be undertaken. Called the Artemis project, 3 missions over the course of 6-8 years will not only bring us back to the Moon, but allow us to leave things behind and begin to develop an on-going presence there.

Tracy Caldwell-Dyson, current astronaut and participant in both panels, revealed in later conversations that she is among the 10 or so women being considered for the mission, which will put a woman on the Moon for the first time. Then, all of that rolls into preparations for the even bigger step: putting a human on Mars, and ultimately establishing permanent human presence there as well.  Tracy Caldwell-Dyson spoke with tremendous eloquence on the nature of human beings as explorers, but also how her time on the International Space Station made her ever-so-much more protective of Earth; our home.

Early on when she was on the station, she and her colleagues would point out there countries on Earth. But over time each and every one of them, including her, would begin to stop imagining the border lines that were not there to be seen.  Slowly, it became one planet. That is why, as Tracy helped us all understand, that no amount of the problems we have on Earth should allow us to stop exploring, stop achieving, and stop reaching for these new goals and horizons.

On the day that Tracy Caldwell-Dyson steps foot onto the Moon’s surface, and then later a human (man or woman) steps onto Mars for the first time, here’s hoping that the world is just a little more ready.  Here’s to imagining, slowly but surely, how people may be turned by seeing our planet from above, or from the Moon.

A singular object on which we all reside. Or, will we face the same reality as now like James Gray’s feature film Ad Astra suggests.  With territorial boundaries and shopping malls and tourism outranking the bigger implications of the achievement of reaching another celestial body.

Ad Astra is a Latin phrase that means “to the stars”.  However, it is actually a shortened version of the full phrase per aspera ad astra, which means through hardships to the stars.  James Gray’s film Ad Astra, which opens September 20, is the most eloquent presentation to date of all those hardships we must get through if we are to reach those stars.