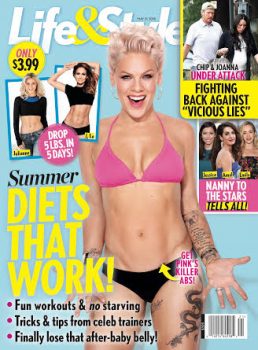 The baby whisperer (also known as Nanny Connie) shares that she was set to move into Jessica Biel and Justin Timberlake’s house two weeks after the birth of son Silas, now 3.

But two days after the delivery, “[Jessica’s] assistant called and asked if I could be on the next plane out,” Connie tells Life & Style. “The baby wasn’t sleeping. I was like, ‘OK, I’m on my way.’ ”

“Jessica was eating cabbage,” she says. “Cabbage is the worst thing in the world you can have [when nursing]. The baby was crying because he had gas!” One small diet change made all the difference: “Everyone started to get sleep,” she says, “and was on track.”

Nanny Connie says that another one of her clients, George Clooney, was prepared when he and wife Amal, 40, welcomed twins Alexander and Ella in June 2017. “He knew how to change a diaper,” Connie tells Life & Style. “He did it really well, and I gave him kudos for it.”

But George, 57, wasn’t satisfied. “He would watch me [change diapers] and go, ‘Wow you did that on your lap!’ I’m like, ‘Yeah, George, I’ve been doing it for 30 years!’ ” The actor’s parenting philosophy? Practice makes perfect. “He stepped up to the plate whenever it was time,” Connie says. “He pretty much embraced the situation and did a really good job!”

Uncle Jesse isn’t just an uncle anymore, and one of John Stamos’ Full House nieces, Candace Cameron Bure, tells Life & Style magazine she has full confidence in him as a father.

“He’s going to be an amazing dad!” she tells Life & Style. “He’s already the best uncle there is, so he has lots of experience.”

John, 54, and wife Caitlin McHugh, 31, welcomed son Billy in April. “They’re great people,” says Candace, author of Kind Is the New Classy, “so their little Billy is going to be very loved and he’s going to be taught to show love.”

Candace, 42, has three teens, but she doesn’t plan to give John any parenting tips. “I don’t like to offer my advice unless I’m asked for it,” she tells Life & Style. “My best advice to new parents is: Just do what works best for you.”

Christina Milian got married in 2009, became a mom in 2010, got divorced in 2011, and now reveals to Life & Style that she’s ready to repeat the first two of those milestones.

“I definitely want to have more kids,” the woman behind the new jewelry line House of Fine Gold tells Life & Style. “And I would love to get married again, too, especially to somebody that I love and that’s open and wants to do it. Sure, they can spring the ring on me anytime!”

Christina tells Life & Style her boyfriend of nine months, French singer Matt Pokora, inspires her to “be a better person and be a better mother.”

Christina also gets plenty of inspiration from daughter Violet, 8. She, Christina says, “gave me a new sense of wonder.”