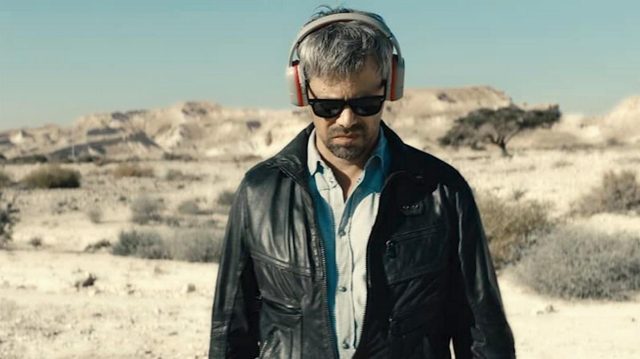 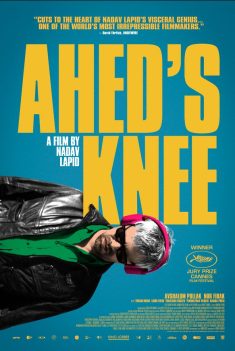 Los Angeles, CA (The Hollywood Times) 4/6/22 – Playing at several Laemmle Theatres is a challenging and self-reflective film Ahed’s Knee (2021) by Israeli director Nadav Lapid. Ahed’s Knee was awarded the Jury Prize at the Cannes Film Festival in 2021 and played at the AFI Film Festival in Los Angeles in November 2021. Nadav Lapid is best known for his film Synonymes (2019) which won the Golden Bear at Berlin in 2019 and featured actor Tom Mercier as a countryless ex-IDF grunt. The main character, known only as Y. (Avshalom Pollak), is close to being Lapid’s stand-in as a troubled Israeli in the midst of two battles doomed to fail: One against the death of artistic freedom in Israel and the other against the impending death of his mother dying of lung cancer. This is given greater poignancy as Nadav Lapid’s own mother had been his writing partner and editor for many years and actually passed away before he set out to make this film.

The critique of Israeli nationalism that’s often the subtext of Lapid’s films erupts to the fore here – and at one point the character Y. (Avshalom Pollak) literally screams at the camera in a long rant about the hopelessness surrounding the state of the country’s moral affairs. The film rails against the complicitly that the officially-sanctioned Israeli culture compels with the inhumanities of its government, though it also warns against taking it at its word. Lapid uses his script to play a canny game with alter egos, frustrating any simplistic reading of the forceful language used by a character who would seem to be his most obvious double.

The movie begins with a disjunctive, Godardian prologue involving an audition of actresses to play Ahed Tamimi, a teenager who became a polarizing figure in the Israeli-Palestinian conflict after she slapped an Israeli soldier. The casting is part of a project that Y. (Avshalom Pollak), a Lapid-like director, is working on. The film opens in Tel Aviv, with a dense, sensorially overwhelming scene consisting of jump cuts and plosive noises, as a figure on a motorcycle races through a thunderstorm. She will turn out to be one of many actresses auditioning for the role of Ahed Tamimi in Y’s next movie, based on the true story of the Palestinian activist teenager who an Israeli lawmaker publicly said should be shot in the knee.

That scene not only precedes Y’s journey out of the city and into isolation, it may be seen as precipitating it. We’re given only oblique views of the action, and at one point the camera is even thrown to the ground, as if in disgust. If the moment communicates a bit of the futile anger that Y,/Lapid feels about Ahed’s story, it only prepares us for the pent-up vitriol that will eventually spew from Y.’s own mouth. This comes late in Ahed’s Knee, in a kind of accusation of Yahalom, whose failure to see the irreconcilability of the politics of his work and the official ideology of the Ministry of Culture may be what puts her on the receiving end of this rage.

Full of despair about global warming and the perpetual oppression of Palestinians, Y. wanders a landscape of dunes and rolling hills, exploring a rain-formed pond that Yahalom describes as a miracle because of how long it’s stuck around despite the unfavorable, arid conditions of the Arava region. Throwing himself into the shallow water of what was once an ancient ocean, perhaps with a mind toward suicide, he glimpses the fossil of an ancient cephalopod at the bottom. And this encounter seems to later inspire his rant to the patrons of the library where Yahalom works, in which he recites an expression attributed to his mother: “Geography wins eventually, including in Israel…and I don’t necessarily mean that in a good sense.”

Appropriately – given the script’s unabashed self-reflexivity – any doubt about our assumption that Y. is Lapid is sown by the story nested within the film about Y’s time in the army. Y turns out to be an unreliable narrator, occupying several possible positions in his tale about his time in the Israeli army during the Israeli incursion in Lebanon in 1982. Were the Israeli soldiers really told to take cyanide rather than be captured by Hezbollah? And Ahed’s Knee turns out to be not a monologue, but a dialogue that Lapid is having with himself about the fate of the home country he’s so disillusioned with. Dialogue as inner dialectic is certainly more interesting than a straightforward harangue, but in the end, watching the filmmaker argue with and punish himself is heady stuff.

The plot itself is relatively simple, revolving around a document that Yahalom wants Y. to sign so that he can get paid for the screening, and which represents a not-very-subtle attempt by the Israeli government to control and censor artistic creation. But the film is really striving for something else: a sort of outer depiction of inner strife, with the arid desert landscapes serving as an epic backdrop for all the turmoil Y. is experiencing.

Made after the death of the director’s mother, Era Lapid, who edited all of his previous features, Ahed’s Knee is also an act of mourning for a relationship that was clearly a pivotal part of the auteur’s career and life. Here, the filmmaker, who is named Y. and played with sweaty gravitas by actor and choreographer Avshalom Pollak, shoots poetic videos that he sends by phone to his mom, a screenwriter stricken with lung cancer.

That backstory helps partially explain the dark forces driving Y. throughout the movie, but there’s something even darker afoot – a growing sentiment of desperation that builds and builds until it comes bursting out in an explosive monologue during the last act. Shouting on top of a mountain, in a sequence that feels nearly biblical, Y. chastises a “government that hates all human beauty,” exclaiming how he wants to “puke Israel out with a scream,” which is more or less what Lapid has Pollak do in that sequence. Ultimately Ahed’s Knee is not about Ahed’s knee – but about an angry film director who feels the need to confront his host in this small desert town in Israel about her role in the system that dominates Israeli culture. The ending is disappointing, but the issues raised by the film are heavy food for thought.