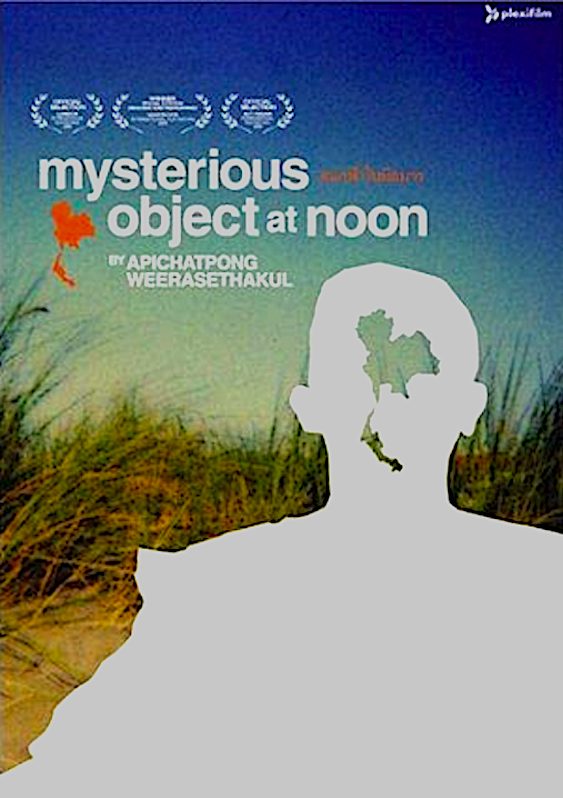 Los Angeles, CA (The Hollywood Times) 4/17/22 – At the Los Feliz Theatre on Saturday April 16, the American Cinematheque launched a retrospective of films by Thai auteur Apichatpong Weerasethakul with a double-bill of his early film Mysterious Object at Noon (2000), a feature-length Thai independent experimental documentary, paired with his later foray into the horror genre with Mekong Hotel (2012). Shot in 16m monochrome, Weerasethakul’s Mysterious Object at Noon induces in the unsuspecting viewer a sensation that has become a hallmark of this singular artist’s work: the mild delirium of being agreeably lost and unmoored.

Mysterious Object was disorienting equally for its out-of-nowhere inventiveness and for being rooted in a very specific – and for many, fairly alien – place and culture. Part road movie, part folk storytelling exercise, part surrealist parlor game, Mysterious Object seems a prologue of sorts before his first commercial success with Blissfully Yours (2002), with its obvious compendium of Weerasethakulian motifs (bifurcated structure, jungle reverie).

While his other films, with their drifts into trance and daydream, have been reductively labeled “slow cinema,” there is nothing remotely leisurely about Mysterious Object, which springs narrative twists and discombobulations at practically breakneck speed. All that said, the movie is less an anomaly than a secret skeleton key. Revisiting this precocious debut with the benefit of hindsight, one is struck by its intricacy and purpose, and by the degree to which it anticipates many of the themes and methods that would define his body of work.

The film borrows its structure, and its principles of collaboration and chance, from the surrealist game of the exquisite corpse, in which each participant adds a word, or an image, to an ever-mutating whole. Weerasethakul’s version draws as well on local oral tradition: He traveled the length of Thailand, inviting various people to contribute episodes to an evolving story. Shot with a small crew, Mysterious Object is both a chronicle of that process and a depiction of the collectively told tale, which grows more fanciful with each new participant, its plot bending to accommodate magical doublings and impossible reversals, and its cast swelling to include extraterrestrial star-boys and witch tigers.

Mysterious Object at Noon is an especially vivid example of the hybrid tendency that has galvanized so much of contemporary world cinema. As with the work of many of today’s most adventurous filmmakers – Pedro Costa, Carlos Reygadas, and Miguel Gomes, to name a few – Weerasethakul’s films rewire the relationship between fiction and documentary. More precisely, they perform a kind of alchemy by which contact with reality turns their narratives that much richer and stranger. A documentary about the creation of a story, Mysterious Object celebrates equally the possibilities of fact and fiction.

After a fablelike opening intertitle – “Once upon a time . . .” – the film plunges into documentary mode, a windshield framing unknown terrain as we pass through it (such traveling shots are a recurring motif in Weerasethakul’s later work). These first few minutes, moving along a Bangkok highway and down narrowing streets, foster considerable uncertainty about where we are headed and what we are hearing. On the soundtrack, a Thai ballad competes with a sales pitch for incense and fish and the melodramatic strains of what may be a radio soap opera. “The more he tried, the more complicated the story,” a male voice declares, foreshadowing the imminent convolutions. Eventually, we realize that we are in a fishmonger’s truck, and the focus shifts to a vendor in the back, who tells of being sold by her father to her uncle for bus fare. No sooner has her tearful confession ended than the director, offscreen, pipes up, seeming to cast doubt on its veracity. “Do you have any other stories to tell us?” he asks, helpfully adding that “it can be real or fiction.”

So prompted, the woman launches into the tale of a paraplegic boy and his teacher, Dogfahr, his primary caretaker and connection to the outside world. The narrator’s attention soon drifts away from the homebound setting – Dogfahr accompanies her irritable, hard-of-hearing father to a doctor, whom she also consults about her own skin problems, possibly caused by a protective necklace. Later, back at the house, the boy finds Dogfahr unconscious, an unidentified object rolling out of her skirt . . . The next person to take up the storytelling baton is an elderly woman who asks about the rules of this game. “Can it turn into a kid?” she asks, referring to the object. The response – “Anything you want” – establishes the anarchic tone that will prevail for the rest of the film.

Mysterious Object at Noon revels in the myriad ways a story can be transmitted. A performance troupe acts out its segment in a traditional song-and-dance routine. A pair of deaf girls use sign language. Sometimes we watch and listen to the narrators as they concoct new installments; sometimes we see their fabulations dramatized, occasionally with voice-over or intertitles to move things along. The scenario grows at once darker and more absurd as it progresses, its lurid developments living up to the film’s pulpy Thai title, Dogfahr in the Devil’s Hand. The object from the teacher’s skirt turns out to be a star from the sky, which transforms into a mischief-making boy with apparent superpowers that allow him to appear as Dogfahr.

Far from smoothing out the crazy-quilt chaos of a story with multiple authors, Weerasethakul adds subtle derangements of his own, sustaining a willful confusion in the telling. The film often declines to signal whether we are in the nested drama or the framing documentary. In fact, with sound and dialogue from one plane repeatedly bleeding into the other, the border between the two remains conspicuously porous. At one point, the actors in the story-within-the-story break character, and the director himself wanders into the frame. Narrative fragments unconnected to the Dogfahr story register as phantom limbs of other intersecting tales, perhaps the radio melodrama of the opening or a residual invention of one of the raconteurs. One narrator calls for a flashback, accounting for the boy’s injury with a wartime plane crash; the film cuts to a television news piece about the event and even inserts archival footage from the 1940s. This chronological tampering triggers a time warp of sorts: back in the ostensible present, we hear a radio broadcast announcing the end of the Pacific War.

The structural playfulness that would become one of Weerasethakul’s signatures is evident in Mysterious Object – the daisy-chain narrative gives way to a surprise epilogue, titled “At noon” – as is the distinctive tone, a wryly amused deadpan in the face of both the wondrous and the ridiculous. The visit to a clinic – Weerasethakul’s parents were doctors – portends the medical environments in Blissfully Yours and Syndromes and a Century. The various instances of transmogrification in the Dogfahr story foretell the creaturely metamorphoses in Tropical Malady and Uncle Boonmee. Weerasethakul forgoes a directing credit in Mysterious Object, opting instead for “conceived and edited by.” More overtly than his other films, his debut embodies the spirit of openness that has always been central to his process. In ways big and small, his films are shaped by the input of others. They find source material not just in his own personal histories and memories but in those of his collaborators.

Mysterious Object at Noon celebrates the very act of storytelling as it is practiced in everyday life, individually and collectively, for reasons both profound and banal. Along the way, it also chronicles a fascinating culture in which fantasy and reality don’t collide but coexist, one shaping the other in ways that will always remain elusive. At the end, in a mysterious coda, the film seems to revert back to the stable and recognizable reality in which it began, as it matter-of-factly observes a crowd of children playing in a village at noon.