Bringing more than 650 business and philanthropic leaders, community members and advocates for homeless youth together, Mr. Black kicked off the evening with a special rendition of “You’ve Got A Friend In Me,” which was followed by a special performance of the song “7 Years” by three-time Grammy nominated pop/soul artist Lukas Graham.

The Honorable Mayor Eric Garcetti of Los Angeles praised the 30 years of vital and life-changing services provided by the organization and urged the crowd in joining him to end homelessness in L.A.


In between the Honoree Award presentations, the rousing live auction featured four distinctive packages/experiences, leading to a bidding war between Miley Cyrus and Lukas Graham for an exclusive dinner for two with Alice Waters at her Chez Panisse restaurant in Berkeley, CA.  Former My Friend’s Place Alum of the Year Sheryl Recinos relayed how the organization changed her life for the better and announced a new Scholarship for Youth.
Accompanied by special video packages, the Honoree Awards were presented by Maddie Ziegler, Dancer/Actress/Model to Marne Levine, COO, Instagram; USC Football Coach Clay Helton and USC Football Players Jordan Austin, Michael Pittman, Marvel Tell and James Birmingham to Angela Helton; Bob Hayward, entrepreneur and former founding partner/CEO of Summit Entertainment to Cheryl Hayward; Ron Finley, The Gangsta Gardener to Alice Waters; and Executive Director Heather Carmichael was moved to tears by the love and support in the room as she presented to Miley Cyrus’ The Happy Hippie Foundation.
To cap off the evening, a visibly moved Miley Cyrus accepted the Honoree Award and dedicated it to the devoted staff of My Friend’s Place, bringing them all up on stage to join her.

Philippe Vergne, Director of the Museum of Contemporary Art, Los Angeles and husband of Gala co-chair Sylvia Chivaratanond; and

As discussed on stage by My Friend’s Place Transformative Education Manager Camilla Brannstrom and Elizabeth Daniels (zine project called “Freeway,” new second edition was given to attendees), each of the five Awards presented — along with a special Award presented to Mr. Black — is a unique, original, sculpted piece of art, handmade by one of My Friend’s Place’s youth artists.

For art, jewelry and design pieces produced entirely through the creative arts programming for youth at My Friend’s Place, please visit www.thecornercollective.org.


Silent/online auction items featured on charitybuzz.com/support/myfriendsplace include Miley Cyrus’ iconic boots from the “Wrecking Ball” music video (autographed by Miley); an Ed Sheeran – signed guitar; a cast-autographed Captain America: Civil War poster; and tickets to tapings of Real Time with Bill Maher, The Voice and Dancing with the Stars. The online auction will remain live through the end of the week.  Good Gracious! Events catered the dinner.


Earlier this year, My Friend’s Place was awarded a Mayoral Proclamation designating January 8, 2018 as “My Friend’s Place Day” in Los Angeles by Mayor Garcetti, with the support of 13th District Councilman Mitch O’Farrell.


About Host Jack Black: Multi-hyphenate star of film, music and TV, Black currently stars in the blockbuster film Jumanji: Welcome to the Jungle.  The two-time Golden Globe nominee has been in dozens of hit movies including School of Rock, The Holiday, Shallow Hal, Kung-Fu Panda and King Kong. He will next be seen in Netflix’s The Polka King, where he transformed himself into the infamous Jan Lewan in a movie that earned him rave reviews coming out of Sundance. Additionally, he recently wrapped The House with a Clock in its Walls opposite Cate Blanchett. On the music front, he and Kyle Gass make up the rock music duo Tenacious D.


About Executive Director Heather Carmichael: Heather Carmichael, L.C.S.W., has been with My Friend’s Place for 17 years. Before moving into the Executive Director position in 2009, she served as the organization’s Clinical Director and Associate Executive Director, bringing over 21 years of experience serving high-risk youth. For more than 15 years, Heather has held leadership roles with the Hollywood Homeless Youth Partnership and is an active member of multitude of advisory boards. Prior to her work at My Friend’s Place, she worked on staff at Children’s Hospital Los Angeles and Larkin Street Youth Services, a nonprofit serving youth experiencing homelessness in San Francisco.
2018 HONOREES


Angela Helton: Angela Helton is the wife of USC Head football coach Clay Helton. Angela and Clay both felt that with the honor and opportunity of being named the Head Coach of the USC Trojan football team in 2016 that it was important to give back to the greater Los Angeles community. After deciding to focus their community outreach efforts to the homeless youth of Los Angeles, Angela connected with the USC Suzanne Dvorak-Peck School of Social Work for guidance and information about local homeless agencies, upon which Angela was introduced to My Friend’s Place.


Alice Waters: Alice Waters is a chef, author, food activist, and the founder and owner of Chez Panisse Restaurant in Berkeley, California. She has been a champion of local sustainable agriculture for over four decades. In 1995 she founded the Edible Schoolyard Project, which advocates for a free school lunch for all children and a sustainable food curriculum in every public school. She has been Vice President of Slow Food International since 2002. She conceived and helped create the Yale Sustainable Food Project in 2003, and the Rome Sustainable Food Project at the American Academy in Rome in 2007. Her honors include election as a Fellow of the American Academy of Arts and Sciences in 2007; the Harvard Medical School’s Global Environmental Citizen Award, which she shared with Kofi Annan in 2008; and her induction into the French Legion of Honor in 2010. In 2015 she was awarded the National Humanities Medal by President Obama, proving that eating is a political act, and that the table is a powerful means to social justice and positive change. Alice is the author of fifteen books, including New York Times bestsellers The Art of Simple Food I & II, The Edible Schoolyard: A Universal Idea, and, a memoir, Coming to My Senses: The Making of a Counterculture Cook.

Cheryl Hayward: My Friend’s Place Board Member Cheryl Hayward has devoted much of her life to service, be it education, environment or youth development and support. Cheryl first began volunteering at My Friend’s Place in 2010 and quickly immersed herself into the program, spending two days a week volunteering on site while also chaperoning field trips and cultural experiences with young people around Los Angeles. With particular interest in the My Friend’s Place Parenting Program, Cheryl annually hosts the Mother’s Day and Father’s Day celebrations, helping empower these young parents while celebrating their achievements. In addition to her volunteerism with My Friend’s Place, Cheryl also devotes her time to Skid Row Housing Trust, where she helped develop a volunteer program in 2011. Now, splitting her time between the U.S. and New Zealand, Cheryl and her husband Bob Hayward are working on eco-restoration on New Zealand’s North Island, as well as providing scholarship opportunities to children to attend higher education.

Instagram: Since launching in 2010, Instagram has become one of the world’s leading social networking apps, with a community of more than 800 million who capture and share the world’s moments. In 2017, Instagram launched it’s #KindComments campaign, aimed at capturing some of the inspiring stories of people on Instagram and the impact that a compassionate and supportive comment can make. The first-ever #KindComments project featured leaders and advocates from the trans community on Instagram reading inspiring comments of support from their followers on camera, and soon spread to include a number of other communities. Communities of support were a major trend on the platform in 2017, with Instagram users coming together on issues within the LGBTQ+ community, discussions around mental health and recovery, sex and body positivity, as well as women collectives and artists promoting female issues.
GALA CO-CHAIRS / BOARD OF DIRECTOR MEMBERS:

Sylvia Chivaratanond is a curator and consultant in the visual arts sector and has worked in various international museums. She also works in fundraising and image management, consulting for clients in the design, fashion and lifestyle communities. Most recently, she was adjunct curator of American Art at the Centre Pompidou Museum and Foundation in Paris. Sylvia is on the Board of Directors of My Friend’s Place. Gregory Butler: Gregory Butler is the CEO of WholeWorldBand, a leading company for video applications that allow users to leverage the cloud to collaborate worldwide and engage with, create, and share video content. WholeWorldBand’s platform Youdio has won the Eircom Spider Award, the Dot IE Net Visionary Award, the Eurosonic Award, and the Irish Times Innovation Award. It has earned nominations for the SXSW Music Accelerator Award and the TEC Award. Gregory is on the Board of Directors of My Friend’s Place.

About My Friend’s Place
On January 8, 1988, two friends working in Hollywood were compelled to help the homeless youth who populated the sidewalks just outside of their office door.

Determined to effect change, no matter how small, the co-founders of My Friend’s Place, Steve LePore and Craig Scholz, began spending their break time making and distributing sack lunches to the young people living on the streets.
Soon, this simple act became a grassroots movement and Steve and Craig had assembled a group of kind-hearted volunteers who traversed Hollywood delivering meals.
After countless hours of interactions with these young people, the duo realized providing meals only addressed a small portion of the issue.
Within a year, the idea was born for creating a judgment-free, “safe place” where intangible needs such as physical and mental health services, creative outlets and employment and education assistance could be met. 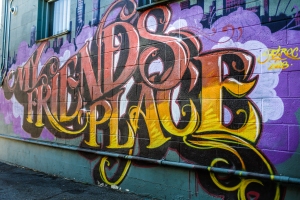 Thirty years later, My Friend’s Place has grown into a dynamic resource center that offers a comprehensive continuum of services to more than 1,350 homeless youth between the ages of 12 and 25, and their children, each year.


Through the expansive programming offered at its Hollywood location, My Friend’s Place provided more than 30,000 meals last year, in addition to engaging nearly 500 young people in more than 700 creative and living arts workshops across 21,000 individual visits.
http://myfriendsplace.org/