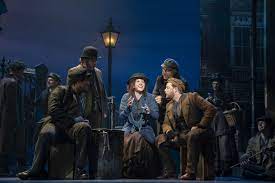 Playing until January 23rd at the Segerstrom Center for the Arts, the Lincoln Center Theater Production of My Fair Lady provides a wonderful journey into sweet nostalgia.

Costa Mesa, CA (The Hollywood Times) 01/17/2022 – “Yes, you squashed cabbage leaf, you disgrace to the noble architecture of these columns, you incarnate insult to the English language! I could pass you off as the Queen of Sheba!”

Honestly, in the woke culture of the twenty-first century, the story that hides behind the pageantry and musical extravagance of My Fair Lady feels more than a little dated. With book and lyrics by Alan Lerner and music by Frederick Lowe, the hit 1956 musical and the 1964 film that starred Julie Andrews on Broadway and Audrey Hepburn on the silver screen as Eliza Doolittle is a bit of a dinosaur when it comes to both class values and women’s rights. However, with a definitive exclamation point of conviction, none of these issues matter when it comes to the Lincoln Center Theater production at the Segerstrom Center for the Arts in Costa Mesa! As directed with Bartlett Sher with stunning choreography by Christopher Gattelli, the musical is simply terrific

Adapted from George Bernard Shaw’s play and Gabriel Pascal’s motion picture Pygmalion, massive historical prejudices and classism are present in the original storyline. From a literary perspective, Shaw was trying to point out the absurdity of class divisions and the extreme difficulty of class mobility before the twentieth century. In the current production, the ethnic diversity of the cast with Caucasian, Latino, Asian, and African American actors play against the English norm. Still, such diversity does not change the text’s original message. Although My Fair Lady’s core message remains intact, there is so much more to celebrate and focus on beyond the politics and social arguments.

First, as Eliza Doolittle, Shereen Ahmed is nothing less than a revelation. Her presence on stage is a splendid mix of undeniable spunk, restrained beauty, constant awareness, and an ever-present desire to be so much more than her limited birthright. With a lovely voice that captures the heart and soul of each classic song, Shereen Ahmed lives up and does justice to the legends that have played this iconic role in the past. Moreover, she brings her own flavor to the role with an indomitable pluckiness that makes you want to protect her no matter what. Like Audrey Hepburn, she captures the audience’s sympathies, making our investment that much greater into the storyline.

Second, as uptight linguist Henry Higgins, Laird Mackintosh is a monstrosity of refinement whose massive ego can only be described as a literal force of nature. From the first scene, there is a thematic tug-of-war between Henry Higgins and Eliza Doolittle that demands the very best from both performers. While being a force of nature, Laird Mackintosh does not overwhelm or consume either the sweet daintiness or the grimy desperation of Eliza Doolittle. He is a generous actor who manages to command the stage when needed without drowning out either Eliza or Colonel Henry Pickering (Kevin Pariseau). Indeed, even when on stage with the ruffian powerhouse of Eliza’s father, Alfred P. Doolittle (Adam Grupper), Mackintosh holds his own while allowing the dynamic Grupper to shine a touch more brightly. In other words, the genius of Laird Mackintosh is knowing just exactly how much to give to each scene.

With an ensemble cast of over a score of actors, the choreography and blocking of the production are almost perfect. The transitions feel flawless with a revolving stage and several intricate sets, and the actors move gracefully with the shifting plates and columns. Every actor fulfills his or her role with balance and respect for the whole production. Such theatrical magnanimity allows everyone to shine without any one cast member unbalancing or attempting to outshine the others. By knowing their roles and places, the ensemble allows the stars to shine truly.

Finally, it would be a crime to stop writing this review without noting the intoxicating extravagance of Michael Yeargan’s set design and Catherine Zuber’s costumes. Together, they are like dance partners that help to elevate each scene to the next level of excellence. During intermission, everyone seemed to be talking about the hats and the dresses and the overall beauty of the presentation on stage. Supported by great music and an impeccable orchestra, all the many professional and inspiring pieces of this production come together to form a wonderful whole that should not be missed. Indeed, it was a delightful escape from 2022.