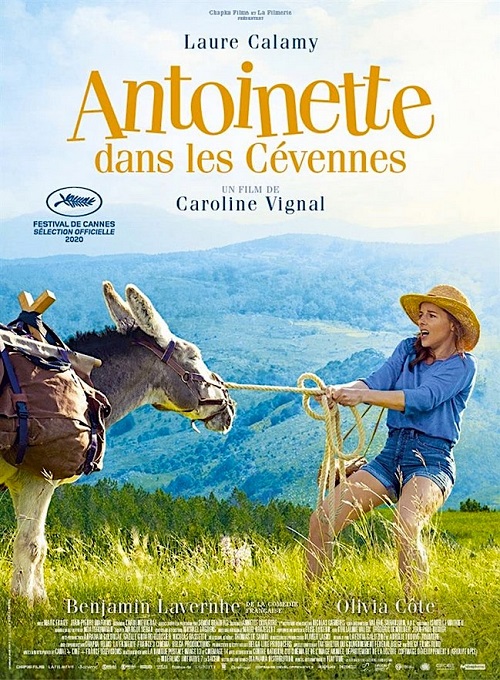 Currently on screen at several Laemmle Theatres in Los Angeles is My Donkey, My Lover & I (Antoinette dans les Cévennes, France, 2020), a pleasant and comedic film by Caroline Vignal. It was included in the lineup of the AFI Virtual Film Festival 2020 and has finally found its way into theatres now.

My Donkey, My Lover & I is about a young woman named Antoinette who embarks on a six-day walking trip through the Cévennes with a donkey, inspired in part by Robert Louis Stevenson’s Travels with a Donkey in the Cévennes (1879).  Antoinette, a school teacher, is looking forward to her long-planned summer holidays with her secret lover Vladimir, the father of one of her pupils. When learning that Vladimir cannot come because his wife organized a surprise trekking holiday in the Cévennes National Park with their daughter, Antoinette decides to follow their trail. Arriving in the Cévennes alone, she arranged to hire a donkey named Patrick to carry her load along the mountain trail.

The GR 70 hiking trail, also known as the “Chemin de Stevenson,” runs through the Cévennes Nature Park. Plagued by lovesickness, the writer Robert Louis Stevenson wandered there in 1878 and then wrote the report Journey with a donkey in the Cevennes. But Stevenson finally got his great love to leave her husband. This is what Antoinette is told by the husband and wife who run the hiking hostel in the woods. They try to comfort this lovesick young woman who seems obsessed with following a married man.

The film is very much about location: We are intrigued with the “gîte” or rustic inn where Antoinette, in the shadow of Stevenson, sobs into her wine glass. This comedy is one of the sort of French films where you wait until the end of the credits to get the details of the locations. In her first film after her highly acclaimed debut Les autres filles (2000), director Caroline Vignal has created a film that matches the emotional terrain with the ups and downs of the mountainous landscape. This comedy, a surprise hit in France with 700,000 viewers in COVID times, obviously will generate tourist interest in that wildly beautiful region in the Massif Central in a similar way to how Saint Jacques – Pilgrims in French began to impact hiking on the Camino de Santiago.

Despite the similarities, Antoinette’s self-discovery course is stimulating in a different way – if only because the leading actress Laure Calamy manages to never seem ridiculous or tragic.  Vignal, a screenwriter, has created a character that Calamy can inhabit half-way between burlesque and melancholy. She won the Best Actress Award at the 2021 Césars in France.

At the beginning of the film, we see school teacher Antoinette Lapouge (a reference to the writer Gilles Lapouge, who wrote the foreword to Stevenson’s book) in a cut-out dress leading her students in a song about an adulteress at the school farewell party before the summer holidays.  The uncomfortable smiling parents also include Vladimir, the father of a schoolgirl in Antoinette’s class, who is Antoinette’s secret lover.

Originally he had planned to slip away with Antoinette on a romantic rendezvous. But at the last minute, Vladimir decides to go on a hiking tour with his wife and daughter in the Cevennes in the Central Massif of France. So Antoinette books a ticket to the region and plans to follow him to the Cervannes. Arriving at the inn at the point of departure on the trail, Antoinette talks to the group of fellow hikers, who find it odd that she is there to pursue the married man who is her lover. Especially amusing is the scene where they do comment on Antoinette’s spontaneity: Romantic, courageous or reprehensible?

Antoinette is traveling the trail alone and decided to hire a donkey. Patrick the donkey is supposed to carry her luggage, but is quite stubborn. The animal only begins to move when Antoinette talks to Patrick nicely. However, for Antoinette, a donkey turns out to be her best listener. And while she is constantly talking to him across the plateau in front of blue mountains on the horizon, the four-legged friend becomes a friend. With his ears twitching with interest, Patrick is the animal equivalent of a mostly silent psychoanalyst. Patrick’s reaction to Vladimir, who Antoinette eventually runs into, is quite telling. And it gets complicated when Vladimir’s wife appears.

At times, the behavior of Antoinette seems clownish, but director Vignal manages to endear us to her. We begin to empathize with Antoinette because she is constantly under observation as a woman traveling alone and made fun of by the others. Antoinette’s attempt to catch up with her lover precedes her reputation from one hostel to the next. Antoinette is the foolish heroine who only listens to her heart, but she eventually learns to see things a bit differently.  This little comedy is a great pleasure to view.