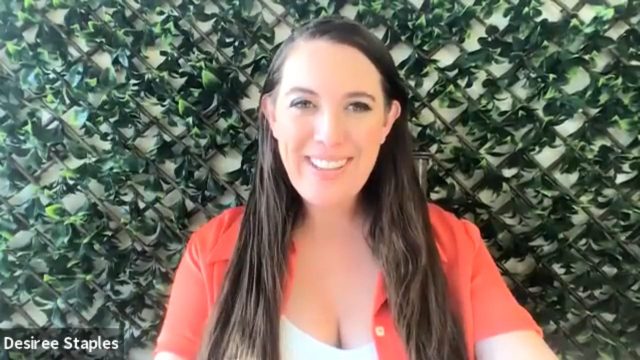 Los Angeles, CA (The Hollywood Times) 11/30/31 – Desiree Staples, a rising star, just wrapped up filming on “My Divorce Party” and the movie is now in post production. Talking to the Hollywood Times, Desiree said “we actually just shot it in October through November. It is about a bunch of gals. My character goes to Joshua Tree and all the girls are expecting it to be a divorce party. But she brings the settlement money with the desire of burning it all. Chaos ensues when all the gals are trying to help her decide how to spend it instead of burning it.” Desiree greatly enjoyed the process of filming the movie.

Desiree pays homage to her theater roots and she sees theater and film as synonymous. “I’m such a fan of ensemble comedies, and especially women-driven ensemble comedies, because I still think we’re scratching the surface there in a way.”

Always wanting to break my new ground, she cites “Trainwreck”, “Bridesmaids” and “Girls Trip” as her favorite movies. Especially of “women behaving badly”, which she still thinks there aren’t enough movies of, and an untapped market.

She believes that friendships today and being an adult is much more complex. Desiree feels that in the media, tough topics like divorce are sugarcoated and that the real aspects of this don’t get delved into as much. She also loves humor as she believes it has healing properties. Those elements are what drew her to the project. Right now the film is in post and there’s an investor campaign through WeFunder where individuals can invest in films.

As a millennial, Desiree shocked me with a statistic: millennials only control about 3 percent of the money out there and 1 percent is controlled by Mark Zuckerburg.  This is so true. Many have gotten a great education going to the top schools but are not able to make the money their predecessors did.

She attributes this to the recession and the pandemic but also sees a positive: millennials are the self improvement group. She says many are actually more inclined to do something about a problem such as leaving a bad relationship and not sticking it out just because it’s a social norm.

As a child of divorce growing up in the 90s, she recalls the stigma. But now things have changed. However she is still fascinated by the fact that in the comedy genre, this is hardly talked about.

Yet she sees opportunity in dealing with the complexities of divorce and even in dealing with marriage. She sees things in a gray area where many times, both parties are at fault and have their strengths and their weaknesses.

Desiree sees the Kristen Bell and Dax Shepard relationship as a good model. “They fight, they argue, they have issues, but at the end of the day, they choose one another every time. It’s the same with our families. We don’t get along with our families every second of every day. Of course there’s hardships.”

With social media, Desiree loves it but also takes to task the facade in her new series.  “That’s something that we’ve been exploring in the pilot [of “It’s What She Would Have Wanted”]. I’m working on the series with Nate Trinrud. [We explore] that we often put on social media, this facade, not of who we are, but who we want to be.” But the show itself, filmed right before the pandemic in her childhood home in Laguna Hills, is a story about adult girlfriends who got together after making a pact in childhood to keep their secrets.  But one girl passes away and a dark secret is uncovered as the plot thickens.  To me, it sounded like a modern day Jawbreakers, one of my favorite movies.

This project channels one of Desiree’s favorite genres: mystery comedies. She cites “Dead To Me” and “Desperate Housewives” as influences, where women make huge mistakes and find themselves in crazy situations, sometimes involving murder. What makes this project unique and exciting is the usage of “social media as breadcrumbs”. It is a relatively new phenomenon for those who have passed to leave a lot of their secrets behind on social media. “Only in the past 10 years or so, when someone passes away, their Facebook remains right there. Instagram remains. That’s a very new platform and strange thing at our disposal. People will every year pay tribute on Facebook for someone that’s passed, and it feels like a connection, it feels like they are speaking to them. That’s something interesting to explore.” This will be explored in “It’s What She Would Have Wanted” which already made the film festival rounds such as the National and LA Film Festivals, Mill Valley, St Louis and more.

She loves to see what her friends are doing, especially those she is unable to interact with or see on a regular basis. Then when she does catch up with them, there’s a reference point. But she realizes it’s curated material, what is approved for the public to see.

She feels it’s artificial at times, “I feel like I talked to that person. It’s like, ‘No, you haven’t’. That’s not a social interaction. That’s just a little blip in the universe that they sent out.” But practically speaking, she loves social media for the quick ability to network especially in film, and to fill in last minute jobs.

“It’s also a quick way of getting to a lot of people at once and sharing news at once. But it’s also something that is artificial. And I think once we lose sight of how artificial it is, that’s a little dangerous.” Wise words.

Desiree grew up in Laguna Hills, Orange County. She grew up talking very quickly and was very social. She loved to make people laugh and to perform and actually started as a singer before moving to comedy, improv and finally filmmaking.

She likes things that take a twist on the familiar but seen in a new and exciting way. Desiree also likes dark comedy. She loves antitheses and opposites. “With great grief I think comes great humor. When we are thrown in crazy situations all you can do is laugh sometimes because that’s how you get through it. And being grateful for the things that we do have despite the madness of the chaos.”

She also loves good writing. Working on the aforementioned pilot with Nate and also on “The Influencers”, she focused on cracking the code of the scripted human experience.  With her co-creator and co-writer, Ally Kornfeld, the story is about an ambitious woman who goes to work at a talent agency and realizes it’s all crazy YouTube stars. It explores what is now a viable career path for millennials. It evokes vines, but these days it’s even more relevant, with TikTok rising to the top and hottest of social media apps.  She recalls people smashing their faces with bread and getting millions of views. “The show was a blast and it was loosely based on the Logan Paul influencer vibe.”

Reese Witherspoon is Desiree’s biggest influence. She finds her groundbreaking in what a producer, filmmaker and actress can accomplish. She also admires Nicole Kidman who battled ageism in Hollywood, and found new avenues despite her age and barriers Hollywood would put up. But Reese as a producer is admirable to Desiree. “Sometimes there’s a project where I know I’m not the right person for the role. It’s not my story to tell. I’m not perfect for the role. I think she’s very fair and understanding of that as well, as she supports projects that she thinks are exciting, groundbreaking and important.”

Desiree believes that certain roles that are passed to older women are too cookie cutter and definitely not the leads, just tertiary characters. She wants to see more stories around older women being told and diversity in the roles.

“I do think that single handedly Reese and Nicole spearheaded these women’s opportunities through the success of ‘Big Little Lies’. It opened up these avenues. This is the year of Jennifer Coolidge. I think it is getting better. And I think that no matter what, Hollywood does have an unfair beauty standard for both men and women. And we’re seeing more real people. Not everyone has to be a supermodel anymore. And they shouldn’t be because these are real people in real stories. So I think Hollywood is getting in that direction.”

She is also a big fan of the Geena Davis institute. Desiree cites their great work saying, “it would blow your mind just how few characters are over 40, how few characters are women,how there are different levels of occupations, and how they lead to stereotypes later. So I highly recommend checking them out. They have amazing data and tools like where it will go through a script beforehand, before you film and find where you might be able to make tweaks and changes. For example, just making sure that your people of color in a show have the same level of occupations as your leads, and making sure you represent your characters with disabilities.”

As a new writer, she is loving the experience and growth, “I found that truth is stranger than fiction. The more we are like the real world that’s around us, the more people are going to be drawn into it because they go, ‘Oh, this is my life. I relate to this person. I know that person’ versus ‘Oh, these are Hollywood versions of people I sort of know.’”

Lastly, Desiree raved about “Squid Games”, which I just covered on YRB Magazine, having surpassed 3 billion minutes watched. “‘Squid Games’ and ‘Parasite’ have changed the game of international filmmaking. I understand theoretically behind it like ‘oh if it’s broke if it ain’t broke don’t fix it. This is what has made money, but it’s wrong. It’s totally wrong that people often are too scared to take the risk of doing something new. I think Netflix is doing an incredible job of taking risks because they can and they do have enough money. Squid Game shows you that you don’t need star names in America. It wasn’t even in English. Good storytelling, amazing acting and amazing writing and a budget that wasn’t even crazy at all. It’s just telling amazing stories in whatever language we want, with whatever actors we want, that are just an authentic human experience. Squid Game touched on life and death, and what’s at the core of humanity, survival, wealth and relationships”.

Desiree ends with, “Every person does have the ability to create change as we’ve seen, and create change in their own work. And that’s what I’m about: just making new content and new stories that we haven’t heard before. And I do think that’s by going into topics that we haven’t [explored] and by including the voices that we have not included thus far. And to be authentic and real”.

An impressive up and coming talent in Hollywood, indeed. You can find Desiree Staples on Instagram @desireestaples. You can view the full interview here.