LOS ANGELES, June 13 – Music Verses Art, an exhibition of “songbook collage” portraits of music greats by innovative artist Hayato Takano opens next month at Mr Musichead Gallery, the art space that has melded rock and visual arts on Sunset Boulevard’s fabled “Guitar Row” for the past 24 years. It’s the first U.S. solo exhibition by the award-winning visual artist.  It launches on Thursday, July 14 with a by-invitation-only reception from 7:30 – 9:30 PM at the gallery, located at 7420 Sunset Blvd. in Los Angeles.  The exhibition opens to the public Friday, July 15 and runs through the end of the month.  All original Hayato Takano artworks and limited edition prints on display at Mr Musichead are available for purchase.

Takano’s songbook collage portraits are a source of delight for art aficionados and music lovers alike. With each piece, he transports his viewer on a dazzling journey that captures the intricacy of composition and the artistry of the composer. This coalescence is created by Takano’s tearing original sheet music into thousands of pieces and assiduously placing them onto a canvas, virtually note by note. 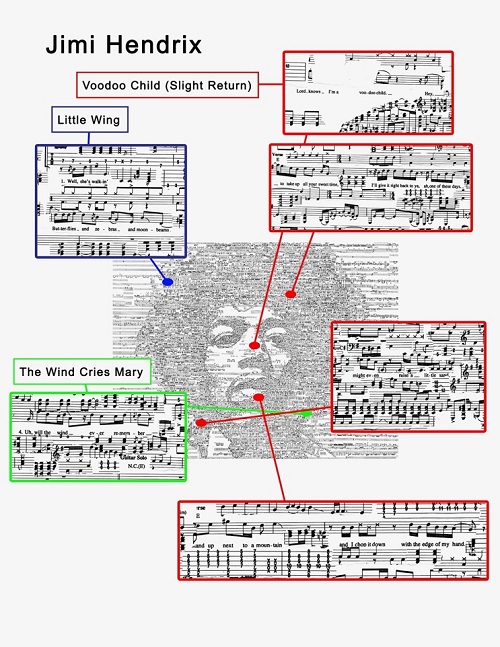 Hayato Takano’s Jimi Hendrix portrait is composed using sheet music for, “Little Wing,” Voodoo Child (Slight Return)” and “The Wind Cries May” as well as “Purple Haze,” “Fire,” “All Along The Watchtower” and “Castles Made of Sand”

Using only an eraser, glue, and curved stainless-steel tweezers, he has produced striking portraits while simultaneously capturing the creative essence of his subjects. He’s taken a given subject’s own creative endeavor – music they composed or with which they are associated — to create an image that could, in a certain sense, be considered a “self-portrait,” insofar as that musician’s actual notes are used to create the image. His “note-for-note” portraits run the gamut of contemporary music icons including Prince, David Bowie, The Beatles, Bob Dylan, Stevie Wonder, Kurt Cobain, Bob Marley, Freddie Mercury, Jim Morrison, Mick Jagger, Jimi Hendrix, Elvis Presley, Neil Young and Miles Davis as well as classical composers Mozart, Vivaldi, Schubert, Beethoven, Bach and Tchaikovsky. As an example, his portrait of Bob Marley incorporates sheet music for “Get Up, Stand Up,” “I Shot The Sheriff,” “Is This Love,” “Jammin’,” “No Woman, No Cry” and “Redemption Song.”  His portrait of David Bowie incorporates sheet music for “Diamond Dogs,” “Rock ‘n’ Roll With Me,” “Future Legend,” “Big Brother” and “Rebel, Rebel,” while his Stevie Wonder piece uses no fewer than 22 different songs including “Higher Ground,” “Living For the City,” “Isn’t She Lovely,” “Signed, Sealed, Delivered I’m Yours” and 17 more.

An immigrant originally from Toyama, Japan, Takano started his artistic journey as a teenage musician. In 2002, he transitioned to collage artistry while making a piece for his then-girlfriend and now wife. As an impoverished music student in Los Angeles, he made the gift out of necessity while stumbling onto a lifelong passion for the medium he had devised.

In February 2017, his work was featured in Making the Cut, Vol. 1: The World’s Best Collage Artists (Crooks Press, BooksBaby). The prestige of being acknowledged in the book attracted the attention of the Recording Academy’s MusiCares philanthropic initiative and his work was featured at the annual Grammy charity event. Also that year, he and his work were highlighted in a BBC News piece, and thereafter he was selected as one of the finalists for Art Revolution Taipei, where he went on to win The Chairman’s Award.

My work was born as a result of combining my two biggest passions in life, music and art. As a poor music student in Los Angeles, I used the materials available to me to create a gift for my girlfriend at the time, who is now my wife. What started as a project born out of necessity evolved into a lifelong passion for breathing new life into celebrity and musician portraiture. My paper collaging process entails tearing sheet music into thousands of pieces and assiduously assembling them on canvas with surgical tweezers. As a musician myself, I’m familiar with the process of combining disparate elements of melody, composition and harmony to create a cohesive physical manifestation of how I experience the musicians I admire. The title of this exhibition references the verses of each musicians’ portrait. For example, Jimi Hendrix’s portrait features lyrics from “Voodoo Child,” which creates a work wherein Jimi is literally being constructed using his own art. The intricacy of my art is such that it’s often mistaken for being computerized, when in reality every piece is torn by hand. The placement of just one small note can make a huge difference in any given piece, which speaks to the highly detailed and personal nature of my work.

Founded in 1998 by Sam Milgrom, Mr Musichead is a Los Angeles gallery that has grown to be the world’s foremost nexus of music-related art and photography, representing over 80 acclaimed photographers and artists. Milgrom has curated many exhibitions of renown including showings of the work of Bob Gruen, Grace Slick, Jerry Garcia, Chuck D, Baron Wolman, Danny Clinch, Chris Cuffaro, Brandon Boyd, EMEK, and Storm Thorgerson. As host to one of the finest collections of music-related photography in every music genre, the gallery also offers album cover and poster art chronicling music’s rich heritage and artwork by some of its greatest legends spanning the dawn of rock ‘n’ roll in the 1950s to the present day.