Beverly Hills, CA (The Hollywood Times) 10/24/19 – Who knew that a children’s program could possess all the ingredients of a great show to even keep this adult entertained? PBS does it again with their stimulating new series Xavier Riddle and the Secret Museum! Together, 3 children teleport using hidden passages in their local museum to different eras of time to learn important life lessons from history’s most prolific influencers. Tackling issues concerning social-emotional skills, healthy risk taking, and critical thinking, very powerful figures from our past accompany Xavier and friends to educate viewers on important and formative life lessons while remaining extremely imaginative! 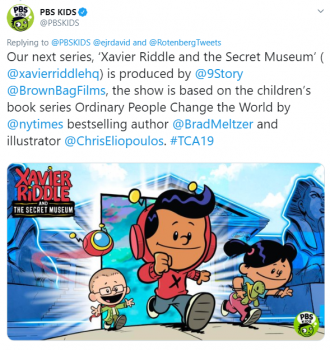 One thing I found very strange about this at first watch was the fact of famous names from each episode like Amelie Earhart, Helen Keller, and George Washington Carver, were portrayed as children. As the episodes passed it dawned on me: This is strategic! Brilliant executive producer Brad Meltzer thought it exceedingly imperative that the ‘Teachers’ in each episode remained children so the message could be that much more poignant! Meltzer elaborates, “when we started doing the series, they said, well, why when Amelia Earhart gets older and she flies the plane, she should get older. That’s the historically accurate thing to do. And Chris, our artist, did a drawing where when she got to meet her teacher Neta Snook, she got out there and Amelia Earhart was aged up to the plane. And kids were completely bored by it. They wanted nothing to do with it. But when Amelia Earhart stayed young, it was the key lesson, lesson of the show, is they look just like the kids. They’re completely relatable.” Not only was this decision relatable, It enables children from a realistic standpoint to envision themselves in the many scenarios portrayed by the Secret Museum, and reinforces their self-esteem in an extremely empowering manner.

It almost seems impossible, given the year is 2019, to gear a show of this caliber to children and expect the same consumption that other media outlets are subject to. There is so much early innocent-stealing exposure that kids face in this day and age that Meltzer had to get extremely creative with the delivery of the new PBS hit. He explains, “there were moments where the characters were talking too much explaining a moral lesson, and we realized you got to show them more. We learned that early on in the early episodes, is to make sure that kids really saw what they were going through. And once we did that — there’s a Helen Keller episode where Helen Keller, you know, it’s very hard to teach being blind or being deaf. When Helen Keller comes on, we put the whole screen goes black and, you know, just enough that that kid knows that’s how she’s experiencing the world. The screen goes silent, here’s how she hears. She doesn’t hear. And all Helen Keller it’s very hard to teach that. What got through to kids was is that Helen Keller wants to learn to speak. Why? Because she wants to be able to call her dog. She just wants her dog to come up and be able to talk and communicate with the dog. And we all know what that’s like, kid or adult, right? If you couldn’t get your dog just to come to you. And that moment, I was watching alone in my office, and all of a sudden Helen Keller speaks for the first time and calls her dog. I’m crying. I’m crying alone in the office. I’m like, “Go dog. Go to Helen. Go.” And it’s an amazing moment. It’s what the kids they did some recent testing on it. Kids went off the charts on that moment of humanity.” 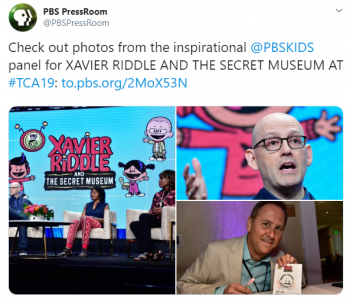 Such a beautiful show with such grand messages for our children; explicitly illustrating potential and attainable goals-make sure children (and adults!) tune in to the premier of  Xavier Riddle and the Secret Museum on Monday, November 11th!