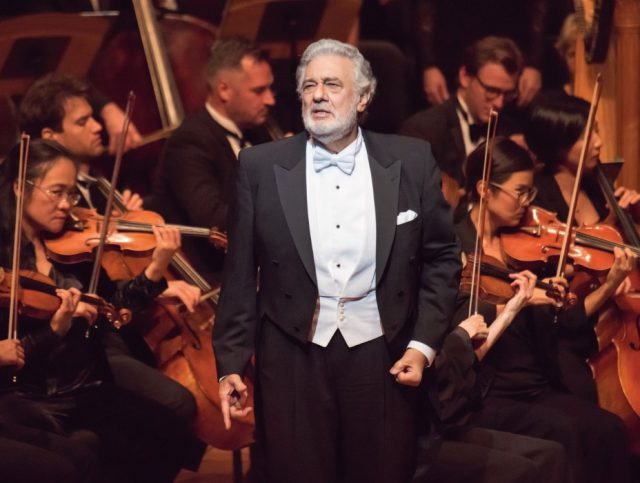 Plácido Domingo with the LA Opera Cast, Chorus, and Orchestra in a Concert Version of Verdi’s Don Carlo on October 1, 2018

ORANGE, Calif. –Plácido Domingo, global opera icon and the Eli and Edythe Broad General Director of LA Opera, returns to Musco Center for the Arts at Chapman University on Monday, October 1 at 7:30 p.m., performing in a concert version of Giuseppe Verdi’s Don Carlo with its full LA Opera cast and the LA Opera Chorus and Orchestra conducted by James Conlon.

Underwriters for the presentation are Marybelle and S. Paul Musco and The Honorable Milan Panić. Doy Henley is co-sponsor.

“Opera is back in Orange County, and in a very big way,” said Paul Musco. “Plácido Domingo and LA Opera’s work with Musco Center continues to elevate opera’s presence here, and we’re honored to be a part of this history in the making. Marybelle, Milan Panić, Doy Henley and I believe in the resurgence of the grandest of all art forms. We cannot do it alone, we need your financial support.”

The Don Carlo concert performance is presented by Musco Center for the Arts in association with LA Opera. A limited number of tickets are still available – the public can call 844-OC-MUSCO (844-626-8726) or purchase online at www.muscocenter.org.

Don Carlo is a riveting tale of morality and mortality, starring renowned tenor Ramón Vargas in the title role and Maestro Domingo as his heroic friend Rodrigo. Ana Maria Martinez performs the role of Elisabeth de Valois, with Anna Smirnova as Princess Eboli and Ferruccio Furlanetto as King Philip II for this special performance in the center’s acclaimed concert hall. LA Times hailed Musco Center as “an ideal opera house, potentially the best in the West and maybe even something more.”

In addition to the public performance of Don Carlo, LA Opera in association with Musco Center will offer a Master Class led by an LA Opera principal. This marks the first of many Musco Master Class programs throughout the season, developing and inspiring future generations of performing artists. In addition to the master class, students from Chapman’s College of Performing Arts will assist at the Center on the day of the public performance, and Chapman opera seniors will attend the performance free of charge. This master class provides students with the opportunity to advance their education and cultural literacy, and to experience and engage with elite productions and performers.

“Musco Center connects students with renowned performers of all disciplines,” said Dr. William Hall, founding Dean and Artistic Director for the Musco Center for the Arts. “The Master Class program offers students access to the highest levels of arts education, production, and performance. Because of this initiative, students have an opportunity to learn from, and be critiqued by, some of the finest musicians in the world.”

Plácido Domingo’s connection to Chapman University stems from a longtime friendship with S. Paul and Marybelle Musco. The Newport Beach couple led the campaign for the $82M Musco Center of the Arts, and graciously welcomed Maestro Domingo’s support since the facility’s inception. The opera legend was present when the center broke ground in 2012, when he turned over the first ceremonial shovelful of earth. Appearing annually since Musco Center’s grand opening in 2016, Maestro Domingo returns for this one-night-only concert version of LA Opera’s Don Carlo.

Giuseppe Verdi’s drama contains a Shakespearean truth and profundity of characterizations, taking place during the late Renaissance at the height of the Spanish Empire. France and Spain have finally negotiated peace after years of war. Don Carlo, son of the King of Spain, had fallen in love with a French princess, to whom he had been betrothed as part of the peace negotiations. But when his widowed father, the king of Spain, decides to marry her himself, the broken-hearted Don Carlo realigns his sympathies and turns against the Spanish Inquisition, knowing that his vow to fight for liberty might ultimately cost him his life.

Don Carlo was first performed in Paris at Salle Le Peletier on March 11, 1867. The opera legend Placido Domingo, the mighty LA Opera Chorus and Orchestra, and a superstar cast join forces to bring this production to Musco Center for the Arts conducted by James Conlon. These are the same performing forces that will be featured in LA Opera’s staged production of Don Carlo at the Dorothy Chandler Pavilion in downtown Los Angeles, where there will be six performances between September 22 and October 14, 2018. For information about the production, visit www.LAOpera.com.

ABOUT MUSCO CENTER FOR THE ARTS
Since its opening in March 2016, Marybelle and Sebastian P. Musco Center for the Arts at Chapman University has taken its place among the nation’s top university arts education and performance venues, offering students and distinguished faculty the opportunity to achieve the highest standard of arts-related education through hands-on, real-world production and performance experience. At Musco Center, the surrounding community enjoys student productions, and visiting artists and companies that perform opera, theatre, touring dance, symphonies, chamber music, jazz, and more.

For more information about Musco Center, a full schedule of events and to purchase tickets, visit www.muscocenter.org.

ABOUT CHAPMAN UNIVERSITY
Consistently ranked among the top universities in the West, Chapman University provides a uniquely personalized and interdisciplinary educational experience to highly qualified students. Our programs encourage innovation, creativity and collaboration, and focus on developing global citizen-leaders who are distinctively prepared to improve their community and their world. Visit www.chapman.edu.

ABOUT LA OPERA
In just over three decades of existence, LA Opera has become one of America’s most exciting and ambitious opera companies. Under the leadership of Plácido Domingo (Eli and Edythe Broad General Director), James Conlon (Richard Seaver Music Director) and Christopher Koelsch (Sebastian Paul and Marybelle Musco President and CEO), the company is dedicated to staging imaginative new productions, world premiere commissions and inventive productions of the classics that preserve the foundational works while making them feel fresh and compelling.

In addition to its mainstage performances at the Dorothy Chandler Pavilion, the company explores unusual repertoire each season through the LA Opera Off Grand initiative, performed in a variety of venues throughout Los Angeles. The company also presents a robust variety of educational programming and innovative community engagement offerings, experienced by more than 135,000 people each season. To learn more, please visit www.LAOpera.org.