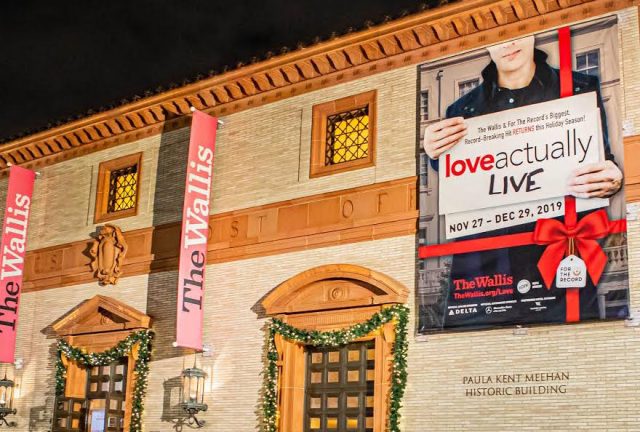 At the Wallis Annenberg Center for the Performing Arts, the theatrical cinematic musical experience of Love Actually Live takes the audience’s breath away.

Los Angeles, CA (The Hollywood Times) 12-04-19 – For a second season, the holiday celebration of Love Actually Live takes over the Wallis Annenberg Center for the Performing Arts. The new take on Love Actually Live is so innovative, there is not a definitive description in the human language to describe it. There are so many things to say, and so many questions that you might ask:

Indeed, if you are a fan of the original movie, seeing Love Actually Live is an absolute necessity. Like a creative addendum to the cinematic experience, it takes the original to the next level of excellence and expression. More than just a performance, Love Actually Live is an authentic experience. Thanks to the brilliance of director and adapter Anderson Davis when combined with the inspired arrangements and orchestrations of musical supervisor Jesse Vargas, the power of the performances on stage reflects the precision of the multi-million-dollar film. Hence, the tribute being paid is worthy of the root material.

Love Actually Live is a production of For The Record Live, a company that is redefining how movies and music come together on stage. Indeed, their productions are genre-defying live experiences that feel like they belong in a category all their own. For The Record Live has opened the door, and it feels like there are so many more exciting adventures to come. Love Actually proves to be a perfect film to transform into Love Actually Live because of the award-winning soundtrack.

Overall, the cast of Love Actually Live at The Wallis is talented and capable. In between scenes from the original movie projected on screens above and across the stage, the cast takes over. Perhaps what is most fascinating is the complete lack of dialogue. All of the dialogue remains in the original film. Instead of dialogue from the live cast, there is movement and positioning with songs, both from the original soundtrack and others chosen to complement the storyline, bursting forth. With pure musical expression, the live show comes across as a celebration of the original. It takes the cinematic experience to another level while also creating something entirely new at the same time.

For example, when playing aging rock star Billy Mack, a part performed brilliantly by Bill Nighy in the movie, actor and singer Rex Smith has pretty big shoes to fill. Rather than imitating the actor, Rex Smith captures the energy and the flair of the character. At the opening night reception, when asked if he focused on the music or the capturing of the flavor of the original performance, Rex Smith explains that one goes hand-in-hand with the other. With a smile, he explains, “It’s such a unique situation. What we are trying to accomplish is the seamless transition from cinema to stage. However, the stage remains connected to the original since the movie is playing over our heads: We almost need a brand-new word to describe the interactive experience.”

During the two-acts of the extended show that lasts over two and a half hours, the all-star cast of singers is complemented by a 15-piece orchestra. Together, their presence brings the film’s fantastic soundtrack to life. With movement and emotion, the actuality of live performers brings out and accentuates the power of the original movie. If you enjoyed Love Actually as a cinematic experience, you would revel in Love Actually Live as a cinematic theatrical experience.

Beyond the precise coming together of two distinct genres, Love Actually Live also captures the Christmas spirit. Like the film, the cinematic theatrical experience covers so many bases. First, it’s a wonderful night out for the family. Second, it’s a great date night for a touch of romance and the rekindling of love. Finally, it’s a holiday celebration for anyone that enjoys film or theatre, and dreams of seeing them come together to create something entirely new.