Beverly Hills, CA (The Hollywood Times) 10/28/19 – David Horn directed Tony Award-winning director Kenny Leon’s bold production of “Much Ado About Nothing” as part of the PBS GREAT PERFORMANCES series.  Shakespeare’s timeless comedy comes to life with an all-black cast featuring Danielle Brooks and Grantham Coleman as the sparring lovers Beatrice and Benedick, along with Margaret Odette and Jeremie Harris as the slandered Hero and her betrothed, Claudio.

Set in contemporary Georgia with an election race underway, “Much Ado About Nothing” finds the community of Messina celebrating a break from an ongoing war–but not all is peaceful amidst the merriment!  Former rivals battle it out, revenge is sought, and trickery runs amok in this treacherous tale of romantic retribution and miscommunication.

This all-new PBS production of “Much Ado About Nothing” was discussed at a TCA Summer Press Tour panel taking place on Tuesday, July 30th, 2019 at the Beverly Hilton Hotel.  Present were director and executive producer David Horn and actors Grantham Coleman and Margaret Odette along with Oskar Eustis, artistic director of the Public Theater.

Updating Shakespeare is always tricky.  How did the 24-person cast and director of “Much Ado About Nothing” make it work?

Oskar Eustis suggested that you need to “find a world that opens up the play, that doesn’t lie on top of the play like some kind of application to it.”  And then you hope that the audience laughs with you and not at you!

We need to remember that Shakespeare wrote for the most diverse audience that had been watching theater for 2,000 years, since Athens.

He was writing for the king or for the queen, for the aristocracy, for the Oxford and Cambridge graduates, and for the illiterate groundlings who stood all day.  And he had to write something that appealed to all of them at the same time!

Shakespeare was writing material that is as broad and funny as what we might think of as sitcoms or popular entertainment today.  But what he was saying is you can’t separate that out from the deepest, most human, and most powerful emotions.  It’s all on the same continuum.

At the very beginning of the show, Danielle Brooks sings “What’s Going On?” joined by “America the Beautiful.”  This helps the audience to understand that the story is about patriotism, about people who love their country and need to try to protect it from what’s happening.  This gives it a seriousness of purpose. 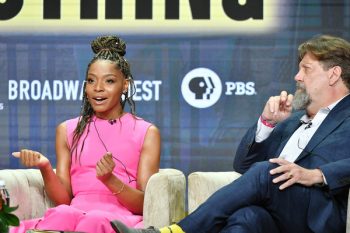 “It’s important not to forget that while [the play] is categorized as a comedy, there’s a fine line of tragedy to it and how a woman can be slandered so easily.  I think this speaks to a lot of what’s going on right now,” said David Horn.  “The plot is toxic masculinity to the nth degree,” affirmed Oskar Eustis later in the panel.

What might be these experienced actors’ favorite Shakespeare adaptations?  Which Shakespeare productions inspired them the most?

Margaret Odette especially enjoyed “The Merchant of Venice” featuring Al Pacino as well as local productions of “Measure for Measure” and “A Midsummer Night’s Dream,” the latter also performed by an all-black cast as a free production of the Classical Theater in Harlem.  Grantham Coleman really loved Kenneth Branagh’s “Hamlet”–and just any Hamlet pretty much!

Oskar Eustis also liked Branagh’s “Hamlet” and gave nods to Orson Welles’s “Chimes at Midnight” and Laurence Olivier’s “Henry V.”  He also mentioned “Throne of Blood” and the version of “Much Ado About Nothing” that Joss Whedon did in contemporary Los Angeles.

PBS strives to make classics like Shakespeare more accessible to all with innovative productions like “Much Ado About Nothing” and programs like “Shakespeare Uncovered” that fill in the historical background on certain plays.  Because of this, Shakespeare has started to have a distinctly American accent!

The Southern lilt in “Much Ado About Nothing” lifts up the poetry so beautifully that it sounds natural in the mouths of these characters.
“It feels like we have now embraced [prior] multicultural traditions so strongly that there is no negative undertow to doing an entirely African American production.  It’s only positive,” said Oskar Eustis.

“There’s no sense that, oh, this is lesser than or this is only for a black audience.  It’s saying, these are the greatest actors we have, and this is the greatest stage we have in America for Shakespeare; and, absolutely, it can be owned by the African Americans in this country just as much as it can be owned by anybody else.  That’s important.”

“I think it’s a great gift to our country to remember that the black community is very diverse and has many voices.  So I’m excited about that,” added Margaret Odette.

Did having a uniracial cast help to focus the drama upon the central issues rather than upon more specifically racial ones?  Perhaps.

The actresses in “Much Ado About Nothing” sometimes defy Eurocentric aesthetic standards whereby anorexic=beautiful.  New definitions of beauty and human destiny emerged from the entire production in a very moving process, according to the panelists.

What might be the next Shakespeare roles the actors would like to tackle?  Definitely Henry V, Hermione, Rosalind, Portia, Viola, Iago, and Julius Caesar.

“I actually think it would be really compelling to see a production with a woman in the role of Julius Caesar.  So I could, perhaps, be that woman someday, because of what happens to Caesar and what happens to women in power,” said Margaret Odette.

“Much Ado About Nothing” premieres on Friday, November 22nd, 2019 at 9 p.m. on PBS as part of GREAT PERFORMANCES’ third annual “Broadway’s Best” lineup.  It is a Public Theater production recorded live at Free Shakespeare in the Park. 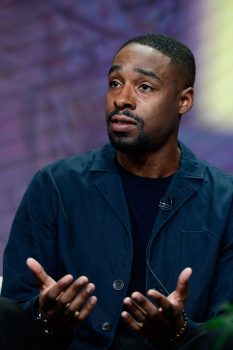 Throughout its more than 40-year history on PBS, Great Performances has provided viewers across the country with an unparalleled showcase of the best in all genres of the performing arts.  GREAT PERFORMANCES stands as America’s most prestigious and enduring broadcaster of cultural programming.

The series is available for streaming simultaneously on all station-branded PBS platforms, including PBS.org and the PBS Video app, which is available on iOS, Android, Roku, Apple TV, Amazon Fire TV, and Chromecast.  PBS station members can view episodes via Passport (contact your local PBS station for details).