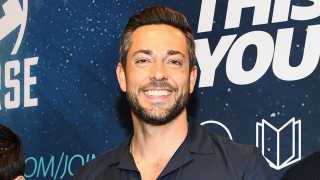 No stranger to superhero films, Levi has also appeared as Fandral in “Thor: The Dark World.”  He was previously best known for starring as Chuck Bartowski in the popular television series “Chuck” and, most recently, as Benjamin in the Emmy® and Golden Globe® award-winning series “The Marvelous Mrs. Maisel,” for which he took home a SAG® Award for “Best Ensemble in a Comedy Series.”

The 2019 categories and nominees will be announced in the coming weeks.

Zachary Levi has proven himself to be a triple threat – he is an accomplished actor, singer, and dancer which was displayed with his Tony- nominated performance for “Best Leading Actor in a Musical” in the critically-praised Broadway production, “She Loves Me.” Levi currently can be seen toplining David F. Sandberg’s blockbuster superhero film, “Shazam!” from Warner Bros. Pictures/ New Line Cinema. Levi recently took home a SAG Award for “Best Ensemble in a Comedy Series” for his recurring role for season two of Amazon Studios’ Emmy winning series, “The Marvelous Mrs. Maisel.” The first season of the show won six Primetime Emmys, two Golden Globes, as well as a Peabody Award and two Critics’ Choice Awards. The second season won one Golden Globe, three Screen Actor Guild Awards, one PGA Award, two Broadcast Film Critics Association Awards, one Critics Choice TV Award, and TV Program of the Year at the AFI Awards. Additional previous film credits include “Thor: The Dark World”; “Alvin and the Chipmunks: The Squeakquel”; and “Tangled.” The song “I See the Light,” written for “Tangled” (performed by Levi and Mandy Moore) was nominated that year for an Oscar and Golden Globe for “Best Original Song”. The pair performed the duet at the 83rd Annual Academy Awards ceremony. “I See the Light” also won the Grammy Award for “Best Song Written for Visual Media” at the 54th Grammy Awards. Levi is best known for his fan favorite performance as Chuck Bartowski in the hit NBC series, “Chuck.” Other previous TV credits include: the Netflix mini-series “Alias Grace” and “Heroes Reborn.”