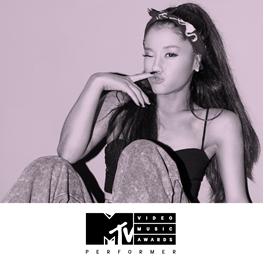 Key and Peele Introduce the World to @TheShamester and @LizardSheeple, Your 2016 Play-By-Play Masters of Ceremony

NEW YORK, NY (August 24, 2016) – Ariana Grande will make a triumphant return to the VMA’s stage with superstar Nicki Minaj, at the 2016 “MTV Video Music Awards.” The fierce female duo will perform “Side to Side” off Grande’s third full-length album, “Dangerous Woman.” The 2016 VMAs will air LIVE from New York’s iconic Madison Square Garden for the first time ever on Sunday, August 28 at 9:00 p.m. ET/PT.

This year the VMAs will forego a traditional host and feature an ensemble cast to cover the action. Comedians Keegan-Michael Key and Jordan Peele will introduce the world to @TheShamester and @LizardSheeple, the world’s most-amazing, spectacular and well-respected social media influencers offering play-by-play commentary of the show’s biggest moments as they unfold. They will be joined by comedians Jay Pharoah and Nicole Byer who will bring their comedic chops to the telecast. Meanwhile, music producer DJ Khaled will keep the party going with reports from the ultimate tricked out skybox inside MSG.

Grande and Minaj shut down and cleaned up at the 2014 VMAs, opening the show with a medley of Grande’s “Break Free,” Minaj’s “Anaconda” and the Jesse J collaboration “Bang Bang.” That same year, Grande’s “Problem,” featuring Iggy Azalea, won the Moonman for “Best Pop Video.”

In keeping with the spirit of this year’s show celebrating the creative expression of artists, Grande made her announcement via a time-lapsed custom-created art feature by London-based illustrator and self-professed “professional doodler” Hattie Stewart. Click here to view (embed below).

To further celebrate the announcement, MTV partnered with Branding by Air for the largest flying video projection screen in the world.  The flying 250-foot billboard will travel along the Hudson River, from the Statue of Liberty up to the George Washington Bridge, displaying news of their performance.

Hot off the heels of her third studio album, “Dangerous Woman” (Republic Records), which skyrocketed to #1 on the charts, Grande became the first artist to debut on the chart with the lead single from her first three albums. Her two previous albums, 2013’s “Yours Truly” and its 2014 follow-up “My Everything,” earned Grande accolades and titles that haven’t been broken since Michael Jackson.

Minaj continues to break records and impact pop culture at large. Her two-time platinum selling and critically lauded third full-length album, “The Pinkprint,” arrived at the top of both the Billboard 200 and the Billboard Top R&B/Hip-Hop Albums charts, cementing her as rap’s reigning queen. Minaj recently made history when she occupied the four top 10 spots on the Mainstream R&B/Hip-Hop airplay chart, becoming the first female artist to achieve the feat.

Fans can place their votes for Song of Summer presented by Verizon!  New this year, MTV has partnered with the world’s fast growing video social network musical.ly for voting. musical.ly will host a #VMASongofSummer campaign offering “musers” the chance to vote for their favorite nominee in this category by creating custom videos with this year’s Song of Summer nominees. Additionally, members of the musical.ly community can use “likes” to bolster their band’s position. Votes will be tallied and a winner will be chosen based on the volume of content generated with each eligible song. The winning song will be announced LIVE on-air during the 2016 “MTV Video Music Awards” Pre-Show which begins at 8:00 PM ET/PT on MTV.

Voting for the “Best New Artist” award, presented by Taco Bell®, will remain live through the 2016 “MTV Video Music Awards” Pre-Show airing at 8:00 p.m. ET/PT and new this year, fans can cast their votes for the category via Facebook Messenger.  The top two artists will be revealed during the pre-show, kicking off a live hashtag vote with the winner being announced during the live main telecast.

MTV is a global media brand inspired by the creative spirit of music and the freedom and passion of youth.  For more information, check out http://www.mtvpress.com.  MTV is a unit of Viacom Inc. (NASDAQ: VIAB, VIA).