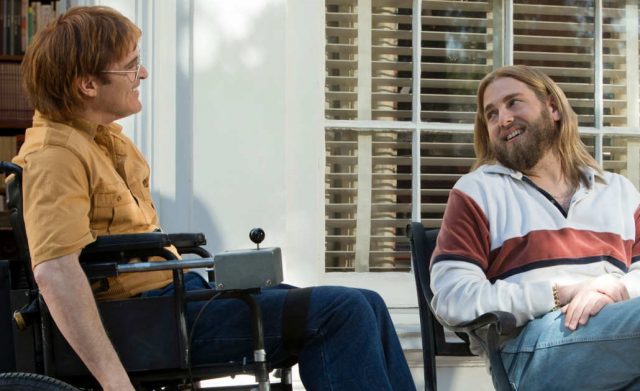 Los Angeles, CA – July 10, 2018, (The Hollywood Times) – The odd title of this biography of paraplegic cartoonist John Callahan is taken from one of his best-known single panel drawings: A posse comes upon an overturned wheelchair in the desert. “Don’t worry,” says the sheriff. “He won’t get far on foot.” It’s typical of Callahan’s dark, irreverent sense of humor (“He left no taboo unbroken,” said a colleague), and a much better hint of the movie to come than the movie poster with Rooney Mara gleefully riding on the back of Joaquin Phoenix’ wheelchair. This is no cutesy disability-of-the-week rom-com. This is the story of a guy who hits rock bottom and has to work his way back into the land of the living, but Callahan’s bottom wasn’t the paralysis. It was the alcohol. 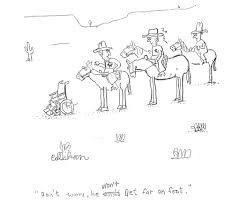 People have been trying to film Callahan’s story for decades. A smart, funny, self-destructive paraplegic alcoholic sobers up and becomes a beloved, if controversial, counterculture cartoonist – now that’s a movie! Sony bought the rights for Robin Williams 20 years ago. Gus van Sant was attached to direct, and Williams would have played Callahan. But they never got the story right, or never got the right executive team on board, or both. Then Callahan died in 2010, Williams died in 2014, Van Sant got ownership of the project and it finally got made — for them, instead of with them. Knowing that going in gives the whole thing a bittersweet resonance. 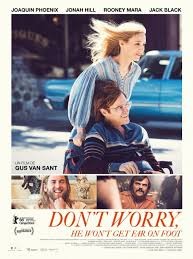 The structure of the film intercuts between Callahan as a drunken, reckless 21-year-old in 1972, Callahan as a drunken paraplegic trying to get sober in 1979, and Callahan as a sober satirist in the early ‘80s. You can spot the era by the shirts and glasses. (Oh, those shirts and glasses!) Assisting him on his journey down is Jack Black; guiding him on his journey up is Jonah Hill, almost unrecognizable as his rich gay, blond AA sponsor. As challenging as it is to convincingly play a man with no control over his body, Phoenix’s performance is overshadowed by Hill’s, whose empathy and warmth washes over the theater. It is eerily similar to Robin William’s therapist in Good Will Hunting, another film directed by Van Sant. One wishes Williams would have stuck around to play that part. (Note that Van Sant first came to prominence directing Joaquin’s big brother, the late River Phoenix, in My Own Private Idaho. The layers of loss ripple….) 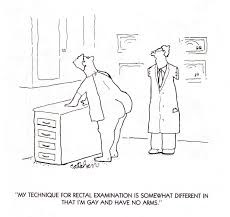 Van Sant slyly emphasizes Callahan’s punk cred by casting Carrie Brownstein of Sleater-Kinney, Kim Gordon of Sonic Youth and Beth Ditto of Gossip in supporting roles. He then detracts from everything good about the movie by casting Rooney Mara as Callahan’s much-too-perfect love interest. One wonders if that was the studio’s demand (“Where’s the romance? We need romance!”), Callahan’s demand (“Hey, I was still hot, you know”) or Phoenix’s (“Cast my girlfriend Rooney or I won’t do the part.”)

Despite the broken timeline of the film’s chronology, it has a distinct linear structure: It follows the 12 steps of Alcoholics Anonymous. It quotes them. It shows Callahan working them. It’s as accurate a film depiction of the program as Drunks or Thank You For Sharing, and anyone in that fellowship will be particularly moved by moments like Callahan admitting his powerlessness, or making his amends. And while it doesn’t say it in the movie, I will tell you that Callahan died sober. And so did Robin Williams.