At the Segerstrom Center for the Arts, the spectacular North American tour of Moulin Rouge transports the audience to a vibrant fantasy overflowing with color and light. 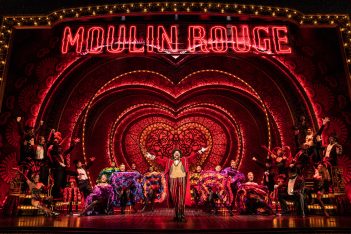 Los Angeles, CA (The Hollywood Times) 11/15/22 – Based on the Baz Luhrmann film of the same name, Moulin Rouge is a theatrical experience not to be missed in Costa Mesa. With energy and enjoyment, the cast puts on an outstanding performance that overflows with colors and movement. Directed by Alex Timbers with a book by John Logan, the musical is beautifully choreographed by Sonya Tayeh. With a vibrancy, that bounds off the stage. Moulin Rouge is a welcome escape from the doldrums of normality.

Coming off her performance as Princess Jasmine in Disney’s Aladdin, Courtney Reed plays the show’s centerpiece as Satine, the lovely singer doomed to meet a cruel fate. With a strong voice and sexy presence, Reed plays the lead as a distant object of desire whose brutal past gets in the way of her emotional present. Satine’s cynical back and forth with impresario Harold Zidler (Austin Durant) foreshadows much of what is to come. There is no escape from trauma. 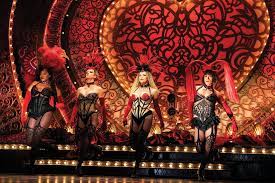 The two members of the cast that truly stand out are Conor Ryan as Christian and Gabe Martinez as Santiago. As the young American, Conor Ryan plays Christian with boundless energy and enthusiasm. More importantly, his voice matches his performance with a power that takes every song to a higher level. Ryan is so darn likable that you cannot help but cheer for him, hoping for the best.

As Santiago, Gabe Martinez is fabulous from start to finish. His sensual dance with Arabia (Libby Lloyd) is the show’s highlight. Indeed, when you watch their passion balance so delicately with wry humor, there is a wistful feeling in the air. Why couldn’t the original writers have based their story around them? After all, they break down traditional archetypes of romantic tropes by embracing wickedness and a passion that we all desire deep within. 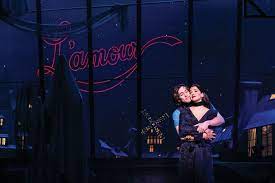 As a critical point to be made, the scenic design by Derek McLane is downright stunning. With an illuminated windmill and a massive, decorated elephant flanking the stage, the scene changes are fluid and fun, providing a sense of the magic of Paris. Overall, Moulin Rouge is not to be missed at the Segerstrom Center for the Arts in Costa Mesa. It is something to behold.