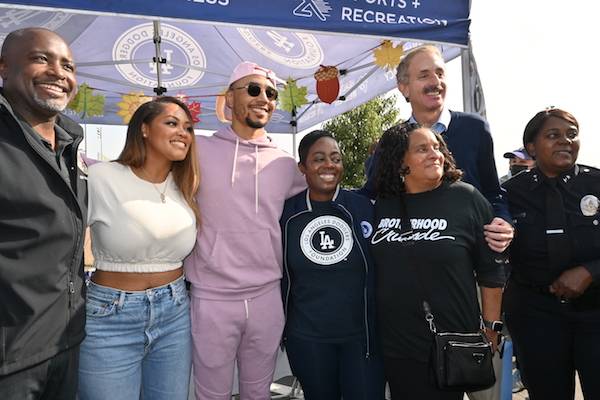 A Thanksgiving Grab and Go

Los Angeles, CA, (The Hollywood Times) 11/17/2021–“ I finally got to a spot in life where I can give back. You just never know whose day you can affect and what you can do. I do anything and everything I can to help brighten someone’s day.” Mookie Betts, Los Angeles Dodgers player and co-establisher of AIM (Acts Inspired by Mookie)

The “Season of Giving,” which typically runs from November to December, is upon us, and Thanksgiving is just around the corner. Today, Wednesday, November 17th, the Los Angeles Dodgers Foundation, Acts Inspired by Mookie, Magic Johnson Enterprises, and the Brotherhood Crusade hosted a turkey giveaway in South Los Angeles. This was done to ensure that individuals in need of a complete Thanksgiving meal received assistance.

To help assure a smooth, calm, and successful Thanksgiving giveaway event, the streets surrounding the Algin Sutton Recreation Center in South Los Angeles were closed off and patrolled by Los Angeles police officers and parking enforcement officials to divert every day traffic away from the immediate area.

Giveaway recipients began lining up in their cars as early as 7:00 a.m. in anticipation of receiving a Thanksgiving turkey and, of course, seeing Mr. Betts up close and personal. As music filled the air, eager volunteers directed each car through the pickup lines.

“The moment that Mookie signed with the Dodgers he was clear that homelessness and feeding Los Angeles was really important to him. I just want to thank Mookie and Bri for the 100,000 dollar commitment to providing 400,000 meals to black and brown communities here in South Los Angeles.”

“Today we will have an opportunity to serve a thousand families through this drive-thru. We know that Thanksgiving is next week and not everybody will have a turkey and fixings and dessert on their table but today we are making that possible for so many people.

I would be completely remiss if I didn’t thank our very significant partner who from day one has shown up for South Los Angeles and made this community frankly what it is, Brotherhood Crusade. Charisse Bremond Weaver, President & CEO, Brotherhood Crusade is my sister in the community.”

The drive-thru was set up at Algin Sutton Recreation Center, where the Dodgers Dreamfields #1 and #50 are located so that two rows of cars could easily enter and exit the giveaway.

As a result of the “50 Feeds LA” campaign to address food insecurity, the Los Angeles Dodgers Foundation and Acts Inspired by Mookie (AIM) awarded a grant of $100,000 to Brotherhood Crusade to provide 400,000 meals for black and brown communities in Los Angeles.

Betts, his mother, Diana Collins, co-founder of AIM, and fiancee Brianna had a great time loading turkeys and goodies bags into cars, pausing to wish recipients a happy Thanksgiving, and dancing to the music that not only filled the air but also filled them.