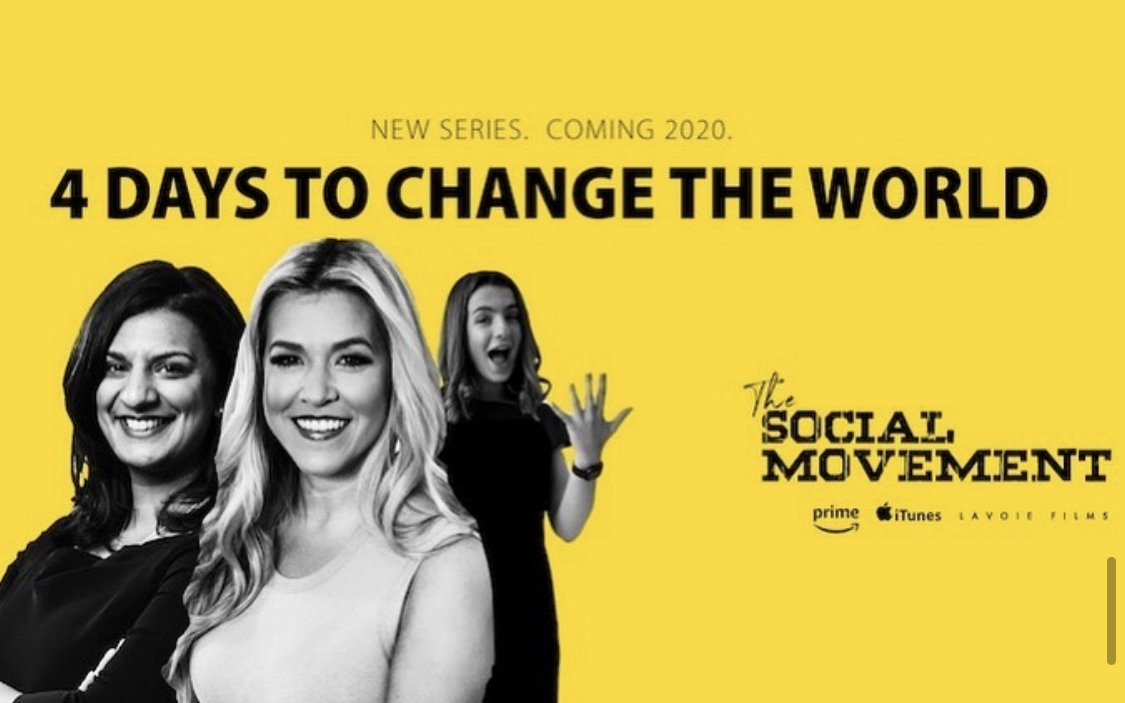 Los Angeles, CA (The Hollywood Times) 4/5/20- “The Social Movement” by Iconic Director, Chris LaVoie and Executive Director, Molly Dare Hillenbrand will certainly be a hit. In the new Docuseries, Chris LaVoie, spends endless hours interviewing and collaborating with CEOs, entrepreneurs, founders, and investors to explore what their particular genius is. Despite the majority of these individuals performing at high levels and arguably being some of the most impactful men and women in the world, LaVoie explains to them that every human has a genius whether you are Elon Musk or a homeless person.“Some people call it a talent or skill set and others call it a gift,” LaVoie shares. As he has these deep conversations with others who want to be a part of The Social Movement, which is conservatively projected to have 500+ million impressions once aired on Amazon Prime Video, the first thing he observes during the conversation is that most people are uncomfortable. They’re not even associating themselves with the word genius. Despite being some of the world class leaders in their area of expertise, they still devalue themselves and feel there is nothing that they do that even comes close to the word genius. The Social Movement is now slated for release in late 2020 (delays due to corona virus).

You are known for your powerhouse PR skills. Tell us about your company, hillenBRAND Media.

hillenBRAND media was born out of my love of humanizing brands and showcasing the story behind the brand and the Founder’s passion that inspired the vision. No one can sell your passion better than you can so to get the Owner in front of a camera talking about why they created what they did and what inspired them to do so is much more interesting to a potential customer than just showing the end product itself.

Tell us about your work with ‘Eye On Channel.’

Eye On Channel brought me on as a TV Host about 2 years ago and then also to expand their brand from just Eye on South Florida to all over the Country which brought me to produce Eye on NY, Eye on Chicago, Eye On California and 8 other cities! It was the first time that I got to really learn all that goes into producing a segment both behind and in front of the camera and where I really fell in love with producing and creating a powerful way to showcase people and their genius.

What do you enjoy most about the entertainment business?

The people. The creativity. The dreaming. The endless possibilities. I think Entertainment allows us a much needed escape from a sometimes harsh reality and to not feel silly about our passions or wild ideas. We bring laughter, we bring emotion, we bring real human connection to experiences through the art of storytelling. In a world that has become so sensationalized and so void of real emotion it’s nice to be able to work in an industry that also allows you to dream, to create, to feel and to inspire without limit through the images and stories we share.

Chris LaVoie is one of the visionary minds that you meet once in a lifetime if you are lucky. Together, with his co-founder, Kevin Kempf, they formed Red Knight Studios Company, of which it’s flagship Series is the highly anticipated Docuseries, The Social Movement. The Social Movement is a groundbreaking docuseries bringing together 50 CEOs, Investors and Entrepreneurs from all around the world together in Montreal where they are divided into teams to each solve a global issue in 4 days. I participated in Season 1 and it was the most incredible experience and where I got to also meet Chris’ co-founder Kevin Kempf. Through many discussions with both Chris & Kevin and realizing that his vision aligned with what I was pursuing as well we joined forces to grow the Studii and this Series. I was brought in as Executive Director and the Director of Partnerships for the Studio. Our team has continued to grow over the past year and we now have many exciting Series in Production.

How has the Coronavirus changed your vision for your show?

This pandemic has only made our passion and vision for what we are creating even stronger. There is such a need to unite our world in solving these and other global issues. We have already added another Team for our 2nd Season charged with 4 Days to End A Pandemic and will be fascinating to watch how this team of incredible minds come together to solve this issue. I can’t think of a better way for us all to heal than to put Hope into Action.

What can we expect from Season 1?

We are releasing Season 1 on Thanksgiving Day on all the major streaming channels including Amazon Prime. I can not wait for the world to be blown away by what the 4 teams were able to solve. From creating 100 percent literacy all over the world to preventing a hurricane from making landfall each team worked tirelessly to solve their issue. These teams included many different mindsets, from many different cultures and countries, ranging in ages from 14 to 65! It’s a Series that will inspire viewers to rethink their possibilities and limitations they have put on themselves and reimagine what they are really capable of accomplishing. What legacy are you looking to leave?

Were there any surprises?

It wouldn’t be a hit show without surprises! I can’t tell you all but I can say that we had one surprise team show up – a team of teenagers from The Knowledge Society ranging in ages from 14-18 They were kept secret from the other teams until the 2nd day of filming – I don’t want to give more away but what they came up with was nothing less than extraordinary. You’ll feel every range of emotion watching these episodes and how great is it to feel inspired and hopeful watching something as a family?! Our hope is that families watch it together because these teenagers are an incredibly powerful and inspirational part of the Series. They are our future and we are in good hands!

How will things change in Season 2?

For Season 2 everything is on a grander scale. The locations, the magnitude of the Social issues, including topics like Mental Health, AI, Cyberbullying, Education and now, Pandemics. We look to showcase entrepreneurial minds and thought leaders and that mindset is what is the most important part of the interview process as we find the right Participants for each Season. We are so excited for the participants that have signed on and I’m sure you will recognize a few.

Chris LaVoie is uniting the most genius minds from around the globe who are competing to have an impact, to make their mark, to forever change this world. “Understand the expectation of how things should be done to understand the narrative of the impossible,” Chris confidently states.

So in one simple sentence how can we summarize everything Chris LaVoie is doing? He’s taking a group of people from around the world and conditioning them to go after the impossible … and make it a reality.’

Our website is www.redknight.tv to see all Series in Production