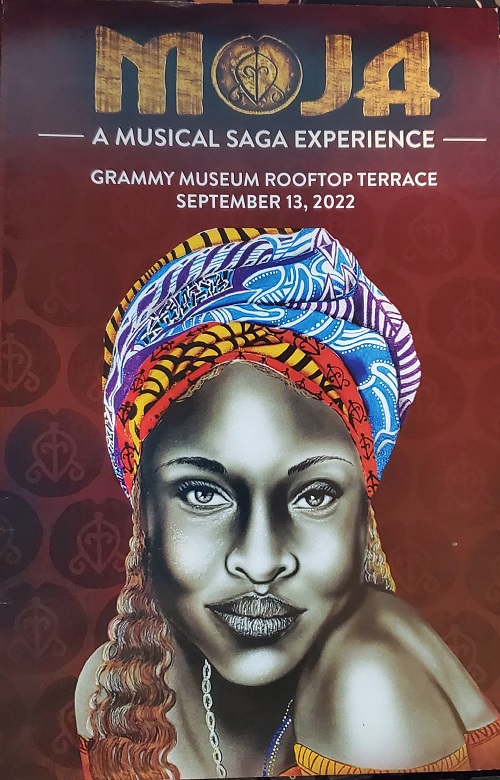 Los Angeles, CA (The Hollywood Times) 9/18/22 – What can we say about The Moja Saga that it doesn’t say about itself with every soul-moving beat? The show, which we were privileged to attend last week at the Grammy Museum in Los Angeles, bills itself as “The never before told story of African influenced music based on actual events.” But it’s so much more than that, drawing on rich traditions and stirring sounds that make it difficult to leave once it’s over!

Enjoy the photos taken on the red carpet by The Hollywood Times at the event:

The Hollywood Times spoke with music producer Caviar on the red carpet.

After the red carpet was a welcome speech by Michael Nixon. They had a panel discussion with Blues sensations, Bobby Rush and Billy Branch along with event hosts Darius McCrary and Carl Gustafson.  They shared their story of being involved with the making of MOJA and what it meant to each of them and how important it is for all us to share this story so that everyone can learn the truth of the saga of the Ellis family. What a great way to learn about history!

The party really started with the Moja Saga Concert Experience and what an experience it was!  It started off with “The Wedding” and “Triumph” featuring African Dancers. Next up was Josh McCrary singing “Things a Young Boy Should Not See”, “You Ain’t Woofin, featuring Litza-Vocals with Sarah Reich, Tap Dancer; “Fancy Lover” featuring Litza, “Tattie’s Blues featuring Indira Khan, “Language of the Soul” (Funk) featuring Tracci Lee and “Couldn’t Find You in a Bottle & “Motherless Child” featuring performer Sheléa.

All amazing performances.  The Grande Finale was a spectacular event indeed.
“Language of the Soul” (Gospel) featuring Josh Kagler & McCrary Singers.  WOW. It was hair raising and everyone was up on their feet and dancing away and even up on stage and in the aisles. What a performance by Josh Kagler.

“The Moja Project is bigger than us, it’s a healer,” says its executive producer and, 2 time Grammy Winner Bobby Rush. The experience encompasses 500 musicians, artists, producers, Grammy winners/nominees, from all around the world to “tell the incredible story of African influence on American music.

The story begins with rapper Sitano, in Los Angeles, who is just wrapping up a present day show. Behind the scenes though, he’s unaware that his grandfather, after 25 years, has found him. Sitano, safe in his big career, pushes back on the reunification of his family and his past. But his grandfather shares a song about his mother, Moja, and Sitano’s resolve breaks. Together, they explore their family history encompassing “slavery, war, and chain gangs, leading to escape, adventure, freedom, and triumph.”

Wearing a blue sequined jacket, Rush told us at the event that he has been up for a jaw dropping 36 awards over the course of his remarkable blues career – and took home 18 of them. Two were Grammy Awards. And where does he keep them?  “I keep them locked up, and I can’t tell you where,” he laughed. “No, I keep them close to me, and I often look at them, and look up and thank God for them.”

The show’s exec producer cites BB King, Ray Charles, and others as his inspirations as a performer and songwriter. And about that flashy blue jacket? He hilariously jokes he got it out of a Cracker Jack box, clearly in a great mood about the show. And he should be. It was absolutely amazing.

Raul Ferrando, distinguished composer and orchestrator for Moja, paused to speak to us as well. “I’m just proud of the project, I’m excited it’s finally coming out,” he told THT on the red carpet. “People are gonna get to know what it’s all about. I worked on some exciting pieces as an orchestrator and composer.”  Ferrando admitted he’s working on new projects, but respectfully declined to tell us what’s next for him.

The stunning Jane Eugene of the Loose Ends, resplendent in yellow, introduced her band to us and said “I don’t know what to expect, I’m just excited. I’m open to whatever happens.”

Chicago Chuck Gullens believes the project is nothing less than musical history in the making.  “I think it’s an exciting, encouraging experience, he told us exclusively. “I think we’re in the middle of music history. And I think this project will take its place amongst the giants of any historical musical project. I believe that sincerely.”

Sincerely, we do, too. To learn more about how to experience The Moja Saga, visit their official website here.