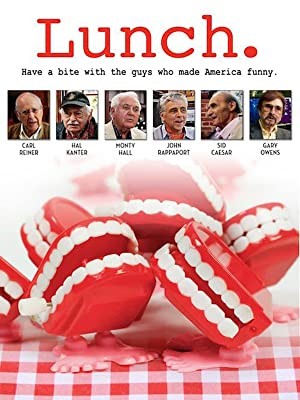 Los Angeles, CA (The Hollywood Times) 6/26/20 – Lunch is a brisk 78 minute documentary written and directed by Donna Kanter. Today the film Lunch takes on extra poignancy in the new age of social distancing. The film chronicles the simple pleasures of elbow to elbow fellowship through the eyes of Hollywood’s elite comic writing corps of the 20th century. Elderly comic giants like Carl Reiner, Sid Caesar, Arthur Hiller and Hal Kanter (creator of the historic TV series “Julia”) mix and mingle with middle weight icons Gary Owens (Laugh-In), Monty Hall (Let’s Make a Deal) and a host of others; all of whom are staving off mortality and ageism by meeting for lunch every other Wednesday in the back room at the L.A eatery Factor’s Deli. It’s an exclusive brotherhood that has persisted for 40 years  and allows admission only by personal invitation from a current member.

Most of the men share a similar history. The long march from Radio to TV to Film. After a brisk roll call of medical maladies, dubbed “The Organ Recital”.  Many stories, jokes and gentle insults abound. Names are dropped with casual frequency and hearing aids are cranked to 11.

Sid Caesar sits at the head of the table, clearly the tribal elder and godfather of this mob without malice. Like his namesake, he is the emperor of this secret society and says little, but whose presence dominates room none the less. Carl Reiner presents as the alpha geezer who swings the biggest member courtesy of his blur of achievements as creator and writer of the semi-autobiographical Dick Van Dyke Show, film and TV credits too numerous to name. Moreover the Reiner name maintains contemporary currency via the exploits of his son, Uber-director and political firebrand Rob Reiner. Papa Carl happily plays out his dotage writing children’s books.

The humor is decidedly Jewish and its roots are deeply planted in their ancestors struggles throughout the ages. Several members served in the armed forces fighting the Nazis in WWII. And the recurring themes are struggle, hard work and luck. They share a legacy of creating their own socio-economic class in the entertainment industry when opportunities were denied to them by provincial white America.

Our portal into this gathering of tribal elders is John Rappaport, the youngest and healthiest member. He is the young buck who will ensure the continuity of the tribe in future decades and who chronicles and reveres the accomplishments of these comedy pioneers now virtually forgotten by callow youth culture. He is both acolyte and cheerleader, helping the frailest members of the group from car to table.

Lunch is a sweet and informative time capsule of a film that harkens back to a time long ago and far away when waitresses were still a thing and jokes were clean.