Los Angeles, CA (The Hollywood Times) 12/2/21 – On December 1 at the Los Feliz Theater in Los Angeles was a screening of a beautiful new 4K print of Miklós Jancsó’s Red Psalm (Még kér a nép, Hungary, 1972) – a formidable piece of cinema from the master-filmmaker of Hungary at the peak of the powers. This is the last in a series of newly restored prints by Kino Loeber of Jancsó’s films screened by the American Cinematheque in Los Angeles. It depicts a series of peasant uprisings in Hungary in the late 19th century and celebrates “the Cause” of the revolutionary struggle. Inspired by folklore and song, Jancsó’s camera travels amongst groups of moving figures in an elaborate cinematic ballet. His singular use of cinematography achieves a resonance and beauty that is seldom matched in films today. Radical in execution and poetic in its story-telling, Red Psalm reaches beyond socialist political dogma to expose a more universal and deeper truth about the landless and disenfranchised in our societies today. Red Psalm resulted in its director Miklós Jancsó becoming the recipient of the Best Director prize at the 25th Cannes Film Festival. The film’s writer, Gyula Hernádi, plucked inspiration from the revolutions of 1848 during the Habsburg dynasty. Red Psalm is a distinctly seductive Communist musical that takes place entirely outside with beautifully composed scenes that discerns the open space of the Hungarian plain and the beauty of faces and dancing bodies.

The film is set in the 1890s on the Hungarian plains of Transylvania (eastern Hungary), where a group of farmworkers goes on strike against their wealthy landowners. They face harsh reprisals and the landowners get the government to send in troops to quell the uprising. Jancsó attempts to capture the reality of revolt, oppression, and violence – while asking deep questions about the morality of the powers that be, including the landowners, the Habsburg rulers, the army, and the Catholic Church. In one scene in the film, a landless tenant farmer is seen reading a passage by Friedrich Engels from his 1845 book The Condition of the Working Class in England and a wealthy landowner insults him saying that peasants are illiterate and unable to read. But it is important to know that just a few years later in 1948, Friedrich Engels and Karl Marx published their famous Communist Manifesto, which spurred the large upheaval in Europe and class struggle that resulted in a series of republican revolts against European monarchies and the beginning of changes in the policies of land ownership and voting rights in a number of countries.

Red Psalm features a cast of well-known Hungarian actors, many of whom have been in other films of Jancsó: István Bujtor, Tamás Csen, József Madaras, György Cserhalmi, Andrea Drahota, Gyöngyi Bürös, and Erzsi Cserhalmi. This film will probably seem like a piece of Communist propaganda in support of the ruling regime in Hungary in the 1970s, but it is far more subtle. Miklós Jancsó was a socialist but not a communist (most people confuse the two) and he was critical of the direction his country was taking (as can be seen in other films by him). As with other films he made, Jancsó got the communist government of Hungary to finance a film that looks like glorious praise of the origin of the party, but it is a staged rejection of government overlords and a celebration of the spirit of utopian socialism. 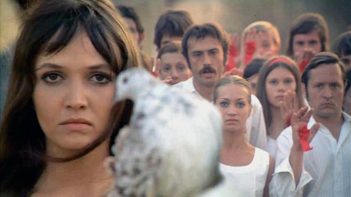 The music is brilliant. It includes folk songs, many of which were probably used in the peasant uprisings. The stigmata, a religious sign of Christ’s wounds, is experienced by a beautiful peasant woman but it turns in her hand into a red flower, reminiscent of the French Revolution rosette cockade pin. One-shot is fired by a peasant killing an army colonel and hundreds of peasants will be rounded up and shot. Jancsó is fond of symbolism and incorporated it here again in the use of doves as symbols of peace and harmony. The film has three naked women walking in protest out on the open plain – with nakedness as a symbol of revolt. They move like the three Graces of Greek mythology and are surrounded by peasants to protect them from the lusty soldiers who wish to ravish them. Of course, this is not realism but part of the symbolic dance of ideas representing the innocence and the beauty of the peasants, who in their ignorance believed in the promised land.

The issue of the rebellion of oppressed peasants seems to belong to a very distant past, and the historical victory of the “People,” Where such revolts happened historically, they never did evolve as its prophets dreamed of. It is also remarkable that the film seems to support a non-Soviet version of the revolution, where, as its leader states, “the land belongs only to those who cultivate it,” meaning of course that it does not belong to the landowners – neither to the State, we conclude! Also noteworthy are the religious connotations that the revolutionaries give to their actions: After resisting the priests, as collaborators of Power, and after burning a church in a choreographic way, they establish their own ritual: A People’s “Sunday Prayer,” rewriting the Christian “Lord’s Prayer” is a powerful plea for social justice. We see the staged “confession and repentance” of a deceived villager who collaborated with the authorities and returned to the “People.” Obviously, at the time of the film (1972), all of these were part of the communist practice that tried to uproot the faith of the simple people but also needed to devise ritualistic substitutes. Today, they are viewed as just another failed anti-Christian effort of a rigid ideological system.

As in Szerelmem, Elektra (1975), Jancsó again uses his favorite images and sounds. Hundreds of extras dance and perform rituals on the vast Hungarian plain surrounded by galloping horses (a traditional Hungarian animal, as the Hungarians are heirs of the nomadic Huns). Another typical feature is the solemnity with which the actors converse and act. No real dialog is to be found but a series of monologues. These monologues reveal what Jancsó is most interested in – socialism and the equality of people. Jancsó tries to show that socialism can peacefully convert even the officials of the old order as seen by the officer refusing to suppress the mutineers and the soldiers dancing with the crowd towards the end of the movie.

Jancso’s film is an enviable achievement of poetic cinema, where human characters are absent since every person appearing is nothing more than a “bearer of ideology and history”. With the continuous movement of the camera, the complete absence of interior scenes (the entire, absolutely entire, movie is filmed outdoors, in the endless Hungarian plain), music, and dance, it captivates the viewer, apparently showing the way to directors who followed, like Bertolucci and Angelopoulos. Like Bartók in music and Attila József in poetry, Miklós Jancsó expressed the spirit of Hungary and its historical destiny in cinema. Jancsó’s movies can be recommended to people with a serious interest in movie-making and especially alternative European cinema. For anyone interested in movie-making by Hungarian directors, perhaps it is best to first start with Szabo’s films such as Mephisto, Oberst Redl, and Sunshine, then go through Belá Tarr’s movies and finally try Jancsô.