Los Angeles, CA (The Hollywood Times) 11/26/21 – Last night at the Los Feliz Theatre in Los Angeles was the screening of a 4K restored print of Jancsó’s Elektra, My Love (Szerelmem, Elektra, Hungary, 1974). It is part of an on-going Retrospective of the films of Hungarian master director Miklós Jancsó by the American Cinematheque. The retrospective has included restored prints of The Round-Up (1965) and The Red and the White (1967), as well as six other films. Elektra, My Love uses Jancsó’s favorite setting, the Hungarian puszta (plain), shot in characteristically oppressive sunlight. The camera movements are carefully choreographed with the elaborate fluid style that became Jancsó’s trademark. Jancsó grew up on the “puszta” of Transylvania, which was part of the Kingdom of Hungary until much of the land was given to Romania at the end of World War I. Jancsó’s Elektra is a cinematic tour de force, only 70 minutes in duration, and covered in just 12 takes. Based loosely on the famous ancient Greek play “Elektra” by Euripides, the film presents the character of Elektra as a voice for freedom in Hungary during the Communist era of post-World War II Soviet domination of the East Bloc. Electra is oppressed by Aegisthus, the tyrant who fifteen years earlier murdered her father, Agamemnon. The film is about the possible attitudes one can assume towards tyranny and dictatorship in the modern man’s perspective.

Jancsó’s films are characterized by visual stylization, elegantly choreographed shots, long takes, historical periods, rural settings, and a lack of psychoanalyzing. A frequent theme of his films is the abuse of power. His works are often allegorical commentaries on Hungary under Communism, although some critics prefer to stress the universal dimensions of Jancsó’s explorations. Towards the end of the 1960s and especially into the 1970s, Jancsó’s work became increasingly stylized and overtly symbolic.

Euripides’ play begins with the introduction of Elektra, the daughter of Clytemnestra and the late Agamemnon. The years after Agamemnon’s death have been stretched to 15 years in Jancsó’s film and Elektra still lives at the court of Aegisthus, who married Clytemnestra and rules his “empire” with an iron fist. Elektra hopes someday to get revenge for the death of her father and believes eventually her brother Orestes, the son of Clytemnestra and Agamemnon, will return and help her depose Aegisthus. Elektra is passionate about avenging the death of their father. In Jancsó’s telling of the Greek legend, Chrysothemis (who was a daughter) is recast as a son who supports Aegisthus and is loyal to his mother Clytemnestra. Played out as an elaborate allegory behind the Greek veneer is a tale so full of Hungarian references that we are immersed in the fate of these larger-than-life figures.

Elektra (played magnificently by Mari Töröcsik) is the center of Miklós Jancsó’s whirl. I was born to disturb the peace of men,” declares Electra. She is discontented, wandering amid daisy-chains of candle-carrying maidens and cymbal-playing dwarfs. Fifteen years have passed since the murder of Agamemnon, Aegisthus (József Madaras) presides as a bald Stalinist who demands praise and understands the force of fear. “Guilty the ruler who burdens his subjects with freedom.” An abandoned outpost summarizes the tyrannized nation, in the cacophony of drums and hooves the crack of whips is heard most sharply. The stream of consciousness approach that emerged in Jancsó’s Red Psalm (1971) finally turns into dance on the open plain. Each of the extended long takes is sculpted with prodigies of movement. The Hungarian plain is one moment teeming with minstrels and horses and the next a vacant stage for a single figure twirling a saber at sundown. 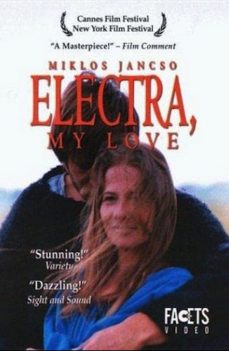 The Oracle has predicted that the son of Agamemnon will eventually kill the usurper Aegisthus – which in the stories behind the Oresteia are that fate has in store. Aegisthus claims that Orestes has been captured and killed – trying to force Elektra to give up on her discontented condemnation of his rule at Mycenae. But she refuses to give in to him, telling him that even if he kills her, she will remain alive in the minds of the people and that justice will triumph. Eventually a messenger arrives, bearing news of the death of Orestes. Elektra stabs the messenger, or – as we soon come to understand – fakes the stabbing. Why? Because she recognizes that the messenger is actually Orestes (György Cserhalmi), who has finally returned and ready to follow through on the reversal of power led by Elektra.

The windswept, incantatory eye of the storm, Elektra finds the serene smile of vengeance: “It’s not you who needs destroying, but the system you’ve built up.” Her previous frown of discontent turns into a subtle smile of contentment and the gears of revolution begin to churn. The obscure tableaux of ancient Greek tragedy is suddenly crystallized into the here and now of Hungary under the Soviet Bloc. Aegisthus is captured in a net and pinned to the ground by a flurry of swords. Clytemnestra and Chrysothemis are stripped naked and humiliated – forced to dance naked on the Hungarian plain for Elektra’s amusement. The continuum of renewals includes a whole menagerie of falcons, oxen and doves have their marks to hit in the choreographed pageantry, with the ever-present Hungarian horses racing around in an elaborate dance. The highly choreographed puszta”-style bareback culminates with one rider standing up on the horses’ backs (csikósok). The uprising’s euphoria culminates with Aegithus placed atop a torture boulder surrounded by taunting nude women. And that boulder becomes as light as a beach ball later – tossed in the air by the elated populace, as Orestes ends the life of the tyrant Aegisthus.

That is not the end, as we all know the curse on the House of Atreus has not finished. Elektra knows that she and Orestes will fall too and they stage this dissolution with a pas de deux with pistols. However, the current hope of change is still in the air, as Elektra announces: “Blessed be your name, revolution.” She and Orestes walk in tandem out onto the plain – only to return to the ever-beating drums, pounding horse hoofs, and cracking whips, as she describes the phoenix or fire-bird of ancient legend that will die and revive with the sunrise each day. With a marvelous bit of anachronism, Elektra and Orestes board a bright red helicopter and go up into the sky to survey the kingdom. They return to join a joyous Hungarian line-dance enfolding the viewer into the euphoria of hopeful change, where utopian socialism will end conflict and class division by valuing all humans equally.

Jancsó’s Elektra(1974) received wide acclaim with Red Psalm (Még kér a nép, 1971), which won Jancsó the Best Director award at Cannes in 1972. Like The Round-Up, Red Psalm focuses on a doomed uprising. Jancsó manages to capture the heart and soul of Hungarian history in his own special way.