Advertisement
Home #Hwoodtimes Michael McDonald: Live stream concert Home Alone 3: “Yo Mama Be There”...
Facebook
Twitter
Pinterest
ReddIt
Email
“His singing is so specific, and it has so much depth…Michael is such a stark example of staying honest and open in your music.”—Thundercat
“[Michael’s lyrics are] straight poetry…this is Shakespeare!”
—Zane Lowe/Apple Music Beats1
April 14, 2021—Singer/songwriter, five-time Grammy Award winner and 2020 Rock & Roll Hall of Fame inductee Michael McDonald is hosting a livestream performance Mother’s Day weekend; Home Alone 3: “Yo Mama Be There” is set for May 7 at 9:00 p.m. EDT/6:00 p.m. PDT. The show is the third installment of his successful Home Alone livestream performance series, see HERE for tickets and additional info.
VIP packages including autographed merchandise and an online encore are also available at the above link. McDonald will perform songs from his time with The Doobie Brothers, as well as his solo career a and number of special cover songs. 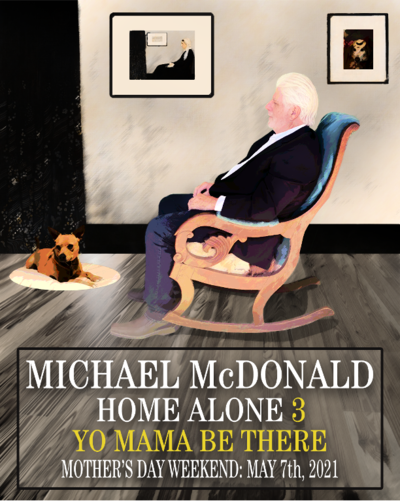 Watch McDonald perform his classic hit “What A Fool Believes” on “Jimmy Kimmel Live!” HERE.
McDonald recently spoke with both New York  Magazine and The Wall Street Journal about his acclaimed work as a member of The Doobie Brothers, plus he appeared on “The Tonight Show Starring Jimmy Fallon” from home for a solo performance of his classic hit with R&B diva Patti LaBelle “On My Own.” Over the past few months McDonald also premiered his renditions of the Marvin Gaye classic “What’s Going On” via Rolling Stone, the Hal David/Burt Bacharach hit “What The World Needs Now” via Billboard and “Takin’ It To The Streets”—which he both wrote and performed as a member of The Doobie Brothers—feat. Drea Rhenee via Parade.
Additionally, McDonald recently performed a Tiny Desk (Home) Concert for NPR Music and joined Twitch’s Stream Aid, “CMT Giants: Kenny Rogers” benefit for MusiCares and the Plastic Pollution Coalition Live Stream Benefit alongside Grace Potter and Jackson Browne.
McDonald joined the Rock & Roll Hall of Fame Class of 2020 as a member of the legendary group The Doobie Brothers alongside band mates Tom Johnston, Pat Simmons and John McFee.
“It’s been one of the great honors of my life to share the stage with all these guys over the years,” notes McDonald. “To see the band receive this honor is wonderful to say the least.”
Other non-active band members inducted with The Doobie Brothers include Jeff “Skunk” Baxter, Tiran Porter, John Hartman, the late Michael Hossack and the late Keith Knudsen. 2020 marked The Doobie Brothers’ first appearance on the voting ballot.
McDonald has also recently completed an extensive U.S. tour with R&B legend Chaka Khan and released the holiday  compilation  Season of Peace: The Christmas Collection (out now via BMG) as well as a full-length album of new material—Wide Open—which received extensive critical praise from the Los Angeles Times, NPR Music, Pitchfork, Rolling Stone and many more.
McDonald celebrated the release of Wide Open with a pair of appearances on “The Tonight Show Starring Jimmy Fallon,” performing the album track “Find It In Your Heart” as well as collaborating with Thundercat and Kenny Loggins on the trio’s hit single “Show You The Way” from Thundercat’s critically acclaimed LP Drunk. McDonald was also featured on  CBS “Sunday Morning” in the wake of the album’s release, watch the segment at http://cbsn.ws/2yTgJdN.
About Michael McDonald
With a career that encompasses five Grammys, numerous chart successes and personal and professional accolades, as well as collaborations with some of the world’s most prominent artists, Michael McDonald remains an enduring force in popular music. Hailing from St. Louis, McDonald arrived in Los Angeles in the early 1970s, honing his talents as a studio musician before becoming an integral part of Steely Dan. In the mid-’70s McDonald was invited to join the Doobie Brothers as the band redefined their sound with McDonald serving as singer, keyboardist and songwriter on such Top 40 singles as “Takin’ It To The Streets,” “It Keeps You Runnin’,” “Minute By Minute” and “What A Fool Believes.” Throughout the ’80s and ’90s McDonald’s solo career took off with a string of hits including “I Keep Forgettin’ (Every Time You’re Near),” “Sweet Freedom,” “On My Own” (with Patti LaBelle) and the Grammy-winning James Ingram duet “Yah Mo B There,” plus he co-wrote the Van Halen hit “I’ll Wait.” McDonald has performed with a who’s-who of critically acclaimed artists across a number of genres, including Ray Charles, Aretha Franklin, Elton John, Joni Mitchell, Vince Gill and Grizzly Bear.
About The Doobie Brothers
For over four decades, The Doobie Brothers have been known for delivering mind-blowing, roots-based, harmony-laden, guitar-driven rock and roll, earning them induction into the Rock & Roll Hall of Fame Class of 2020. Boasting one of the most loyal fan bases in music, selling more than 48 million albums and winning four Grammy Awards, The Doobie Brothers continue to write and record new material and tour the world. Their #1 singles “Black Water” and “What a Fool Believes,” both gold, lead a catalog of indelible songs that include “Listen to the Music,” “China Grove,” “Jesus Is Just All Right,” “Rockin’ Down the Highway,” “Long Train Runnin’,” “Take Me In Your Arms,” “Takin’ it to the Streets,” “Minute by Minute,” “You Belong to Me,” “The Doctor” and more. In all, the Doobies have tallied five top 10 singles and 16 top 40 hits. Beginning with their multi-million-selling sophomore collection Toulouse Street, the Doobies have three multi-platinum, seven platinum, and 14 Gold albums. Best of the Doobies has sold more than 12 million copies, a rare “diamond” record.