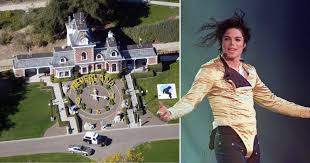 No longer the wicked real estate stepmother that has been on the market since 2015, Michael Jackson’s storied 2,700-acre Neverland Ranch has, at long last, sold for $22 million – a $78 million reduction from the original ask.

Michael designed Neverland as the childhood amusement park he wished he could have had growing up in Gary, Indiana. One of ten children born to a steel-worker father who was also a part-time-musician, and a stay-at-home mother who had country singing aspirations, Neverland had everything to fascinate a child: carnival rides, an electric train ride, and a plethora of zoo animals.  After his death in 2009, the ranch was stripped of every reminder of Jackson’s tenure there and renamed Sycamore Valley Ranch, its former name. It was put on the market in 2015 at an initial price of $100 million.

Located on the edge of a national forest, Jackson first saw the ranch in 1983 when he visited Paul McCartney who was staying there while filming a video. In 1988, Jackson purchased the ranch from land-developer William Bone. Bone had bought Sycamore Valley Ranch in 1981, moved in with his family, and worked with architect Robert Altevers to design all of the buildings from ideas Bone was unable to use in his real estate business.

Today, the buildings consist of the 12,000-square-foot main house, a four-bedroom guest house, a two-bedroom guest house, several barns, animal shelter facilities, and a maintenance shop. The main house, designed in French Normandy style, has large rooms including formal living and dining, multiple fireplaces, and a chef’s kitchen which can also be used for large functions. There are six bedrooms, one of which is a two-story master suite with a fireplace in the sitting room, two large baths, and cedar walk-in closets. One of the closets contains a hidden safe room. Grounds contain a free-form swimming pool, large covered barbecue area, basketball court, tennis court, and a 50-seat movie theater with a private balcony and stage. The four-acre lake also has a fountain.

The ranch was purchased by billionaire-businessman Ron Burkle who was a former associate of Jackson.  Burkle built his fortune by buying and selling grocery store chains and is invested in U.K. and U.S. talent agencies. He has purchased several other unique homes including Bob Hope’s spaceship-looking home in Palm Springs and Frank Lloyd Wright’s Mayan-Revival Ennis House in Los Angeles. Burkle is also part owner of the National Hockey League’s Pittsburgh Penguins.