Los Angeles, California (The Hollywood Times) 3/04/2021 –  Medium Rare Restaurant Group is coming to Los Angeles — and with it, the goal to bring its charitable efforts to fight food insecurity. Kickstarting his efforts with the idea to put restaurants to work feeding hungry Americans, co-owner Mark Bucher is scouting potential properties in and around L.A. Medium Rare is an award-winning restaurant in D.C. Expanding during COVID seems like a rare idea, Mark shares why plans to expand is the recipe for success. 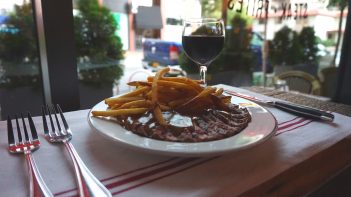 Tell us about how the classic love story began between two people in Idaho, Malcolm Rare and Sara O’Frites began the launch of Medium Rare.

Back in 1812, a classic love story began between two people in Idaho, Malcolm Rare and Sara O’Frites.

Long story short, he was drafted into the Navy, to possibly never see his love, Sara, again. Sarah was forced by her parents to marry an Old, French, American Revolutionary War hero, Colonel Louie Tartar, and forced his new bride to move away from the American West to Paris. Once receiving word of Sara’s recent marriage announcement, Malcolm, now heartbroken, decided to never return to the states and suffer through life in France. Malcolm opened a restaurant in Northern France. There, he worked tirelessly cooking steaks over a charcoal grill and offering meat at varying temperatures, neither of which had ever been done at a restaurant.

One summer evening, unbeknownst to Malcolm, Sara happened to be in the restaurant with Tartar. Eyes met, Sara ran to him and kissed him passionately and uncontrollably. Witnessed by a reporter, it was the first time the term “french kissed” had ever been used. Tartar, furious as ever, challenged Malcolm to a duel the following morning, to which he lost and left for the birds. Malcolm and Sara were married and she came to work at the restaurant. She specialized in cutting potatoes thin and frying them and added a special sauce that she perfected to go with the steak and potatoes. From the popularity and success of their little happy french restaurant, steak and fries became popular throughout France, as well as Belgium.

Two decades later, while traveling through Deaville in 2007, Medium Rare’s very own Mark Bucher, and C0- Founder, Tom, bought a cookbook in an antique book store that had details of Sara and Malcolm’s love story. To their surprise, they found a folded-up piece of paper in the back of the cookbook with the Secret Sauce recipe written in Sara’s hand. Mark and Tom knew at that moment that they should open a steak and fries (Frites) restaurant and it should be called Medium Rare, in Malcolm Rare’s memory.

Medium Rare is all about simplicity. A simple menu, a simple and relaxed environment help our guests detach from their daily stress. Not having a menu to make a meal decision is just one of the ways we make it easier for our guests. You come in, get the steak and frites meal and all you have to do is decide what you want to drink and how you want your steak cooked.

Why is Medium Rare a favorite among locals?

Brunch on Saturdays and Sundays

Start with our Fresh, oven-hot rustic bread and your choice of:

Vanilla yogurt parfait with dried fruit and granola OR a farm-fresh fruit salad or our mixed green salad.

Another Favorite from their brunch menu:

With “the perfect poached egg” or our house scrambled eggs and hand-cut fries.

You are planning to expand to 26 North American cities including Los Angeles at the top of the list. Expanding during COVID seems like a rare idea. What is the recipe for success for the Medium Rare Restaurant Group?

Real estate rates in major cities are low right now, opening the perfect window for Medium Rare to expand to different cities. Our unique understanding of how the restaurant industry can leverage carry-out/delivery options and philanthropy to stay in business will allow us to bring these concepts to cities around the U.S.

When it comes down to it, we want to get the people fed. Whether that’s inside our restaurant, at home out of a to-go container, or through our Feed the Fridge program, we are willing to do whatever it takes to feed hungry stomachs.

There is a humanitarian effort behind Medium Rare. Why is giving back so important to your philosophy as a business owner?

We started Feed the Fridge to help feed the community while paying restaurants to provide the meals. The community helped lift us up during the beginning of the pandemic so it’s our duty to return the favor. People are hungry and need food. We have the means to provide them with a nutritious, chef-prepared meal. We want to change the thinking from “food insecurity” to a better term and concept, “meal security.” It’s that simple.

Tell us about Feed the Fridge.

Feed the Fridge is an effort to bring nourishment where there is hunger while helping pandemic-battered restaurants stay in business. We do this by placing refrigerators around the DC metro area and paying local restaurants $6 per meal to fill them with fresh meals daily. We also hand-deliver holiday meals to seniors who cannot leave their homes.

Feed the Fridge is different from other meal programs because it offers those who need assistance meals without registration. All they have to do is walk up and grab a meal or as many as they need. No questions asked. We pride ourselves on providing meals with dignity.

The program also helps the restaurant industry, providing needed revenue to restaurants that have been struggling during the pandemic.

Medium Rare Restaurant Group is coming to Los Angeles. What excites you the most?

We love everything about Los Angeles. LA is an epicenter for American culture. We are also interested in bringing the Feed the Fridge concept to LA because it has been hit so hard by the pandemic.

You are also urging lawmakers to fight food insecurity. Tell us more.

When it comes down to it, the government needs to put the fight against the war on hunger in the hands of those who can act fast and get food anywhere in under an hour – the restaurant industry.

I encourage the Biden administration to think of Feed the Fridge as proof of concept, a prototype the government can copy — but sending federal funds directly to restaurants to provide meal security. The idea is similar to how Starbucks, Walmart, and Amazon are teaming up with local governments to get vaccines to as many people as possible, the government should be turning to restaurants to deliver healthy meals to those who need them.

The government could also issue payment cards in the same way it has provided stimulus funds.

Look, the government has its place. It’s great at writing checks. But it’s not always the best tool in America’s toolbox to quickly solve problems when the solution calls for ramping up production and distribution systems.

Read more about the full concept in my Opinion Editorial: https://www.washingtonpost.com/opinions/local-opinions/put-restaurants-to-work-feeding-hungry-americans/2021/02/11/8f77ae04-6b11-11eb-ba56-d7e2c8defa31_story.html

Ideally, by the end of 2021, Medium Rare will expand to new locations around the country, bringing our simplified dining concept and Feed the Fridge efforts with us. Along with the rest of the country, we hope to finally be able to have all of our customers dine in at our restaurant with no pandemic-related fears.