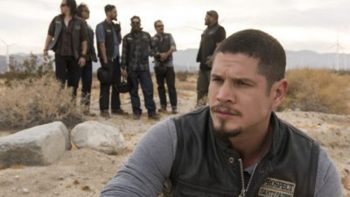 Beverly Hills, CA (The Hollywood Times) 9/2/19 – From the hard streets of Charming California to the California/Mexico border, Sons of Anarchy spin-off, Mayans M.C. is back for another suspenseful second season on FX. The cast of Mayans took to the stage of the TCA Press Tour to discuss the highly anticipated thriller.

It’s no secret that waited on sophomore season of Mayans M.C. gains fans from its tale of vengeance, overwhelming suspense, and more often than not graphic violence. Viewers should thank mastermind Kurt Sutter for the chopped limbs and other severed parts that flail across TV screens for this series and its predecessor. Sutter explains, “it’s not a coincidence that I’m drawn to damaged characters in very dark worlds, right? And that’s where I tend to thrive creatively. And, yeah, the violence is part of that. The lethal force is part of that. I try to be you know, in that therapeutic process, I try to be as responsible as I can creatively. You know what I mean? So it isn’t just me working shit out, you know? That ultimately, you know, there is a rhyme and rhythm and a code to that process.”

With the world becoming so divided and divisive, Co-writer Elgin James explains how Mayans tackle certain real world issues, while also allowing space for the cast to allow their stories to be prevalent through their art. “The first thing I feel is I mean, I feel awful, as we all feel awful [about what’s happening in America]. I feel awful that it’s not the first thing we talked about, right? We’ve all become so used to it. And from my own growing up, getting called like “spic” and “nigger” all the time, and then you just start to believe once you grow up, like, things will change, and then things haven’t changed. And the fact that I spent almost 20 years like fighting white supremacists like, literally fighting white supremacists. So it’s trying to figure out now how to do that through art. And at the same time with the show, we inherited a very high end, very hyper violent language to tell our stories in, to tell our grounded, truthful, on the outside, marginalized story, so that’s always a balance.”

Find out even more ways Mayans M.C. on FX relate to real world happenings and bone chilling suspense in the season 2 premier on 9/2/19.