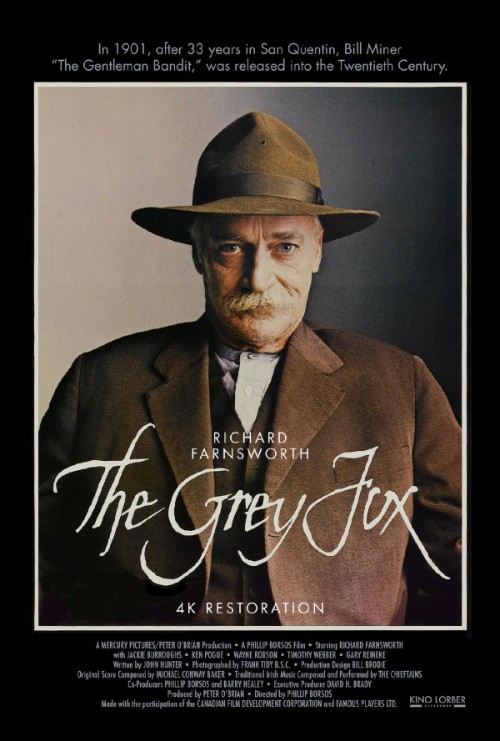 New dazzling 4K restoration of Canadian Classic Western based on the true story of ‘The Gentleman Bandit’ Bill Miner
“The bluest eyes this side of Paul Newman.” – Leonard Maltin, Entertainment Tonight
THE GREY FOX – (1982)
Directed by Phillip Borsos Writer John Hunter
Starring Academy Award-nominee Richard Farnsworth
Opening in LA Virtual Theaters starting Fri. May 29
American Cinematheque
Autry Museum
Laemmle Theatres
https://kinomarquee.com/the-grey-fox
**Ticket purchases support theaters while they are closed**
“Farnsworth is a superb camera subject, with a lulling sexual presence.
[Director Phillip] Borsos is an inspired image-maker.”
– Pauline Kael, The New Yorker
“One of the loveliest adventures of the year…director Phillip Borsos is able
to make this a human story and still keep it exciting as an action picture.”
– Roger Ebert, Chicago Sun-Times
“Terrific. Richard Farnsworth is a delight…remarkably
appealing with a face the camera adores.”
– Vincent Canby, The New York Times

Francis Ford Coppola protégé Phillip Borsos directs this elegiac, low-key tale about real-life bandit Bill Miner that has become a classic of Canadian cinema. Having been released from jail in 1901 following a 33-year prison sentence for robbing stagecoaches, Bill Miner (Richard Farnsworth) finds himself living in a society that has completely changed from the one of his youth. He tries to put his life of crime behind him and settle down in Washington state with his sister, but the quiet life does not suit him. He feels restless but uncertain as to how to proceed next. The answer comes to him when he sees Edward S. Porter’s The Great Train Robbery. Soon, Miner has slipped over the border into Canada and, along with his new partner, Shorty (Wayne Robson), robs the Canadian Pacific Railway Transcontinental Express. Later, while laying low after the crime in a remote corner of British Columbia, he meets the beautiful, strong-willed photographer Kate Flynn (Jackie Burroughs). In writing this script, Borsos reportedly made heavy use of contemporary court documents and testimonies. This film was screened at the 2001 Toronto Film Festival in honor of its 20th anniversary. — Laemmle Theatres
1982 | Canada | Approx. 89 min. |  English
Kino Marquee is a new initiative that creates “virtual cinemas” for temporarily closed independent theaters. Local audiences support their community’s theater in these uncertain times by buying a virtual “ticket” to watch the film. Their ticket purchases directly support their local art house as all revenue is being shared between distributor and exhibitor, just as if they bought their ticket at the theater’s box office. Kino Marquee currently works with over 350 art house theaters across the nation