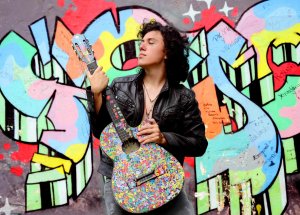 Hollywood, CA (The Hollywood Times) 12/18/17 – In celebration of his first decade in music, 15-year veteran of the music industry and international multi-talented artist, Mauro, debuted the inspirational anthem “Dubstep Heart”  live from Hollywood which in its first week of release reached #1 on the Pop Chart, #3 on the Originals Chart, #4 on the World Chart and #6 on the Dance Chart of Beat100, while NY Music Hits in New York named it as one of the Best Pop Hits of 2017 plus select radio stations in the United States, Germany and Australia are playing “Dubstep Heart” in this very moment.

The Huffington Post in New York City says: “Mauro is a unique world-wide artist with the ability to completely captivate his audiences. This artist really has talent! Aside from his talent he has an awesome work ethic which reflects in the music he released. His music is danceable, radio friendly, filled with relevant messages, and overpoweringly entertaining to listen to.”

“Dubstep Heart” follows a string of international No. 1 hits the singing sensation has already scored throughout the years, including “Dance With Me” which was crowned 2016 Summer Hit by radio stations in North America and Europe due to high demand and earned him an MTV artist page, “Beauty Of Your Soul” and “Making Love 2 U” , all charting alongside Rihanna, One Direction, The Rolling Stones, Jennifer Lopez, Bruno Mars, Miley Cyrus and Little Mix. The international star has garnered praise from The Worldwide Music Directory, All Access (Los Angeles), The Huffington Post (New York), AXS (Los Angeles), Actua News (France), Anthem Review (Australia), Right Kinds of Revolutions (Russia), ArtAid International Art Society (Germany), Talents of World (India), and dozens of award-winning magazines and newspapers around the globe.

His music has traveled the world ever since he was only 10 years old when he composed his debut album Just Songs and started getting hired to headline concerts at many festivals. Now celebrating 15 years crowned with international success, #1 hits reaching the USA Digital Radio Tracker Pop Top 20 Chart, the Top 10 on the UK Pop Tracks and the Top 20 on Central and South America’s hit music stations, radio stations, charts and talent platforms across North America, Europe and South America plus worldwide radio airplay including Top 40 Radio and FM in the United States, UK, Switzerland, France, Russia, Germany, New Zealand, South Africa, Canada, Mexico and Brazil, his song “Chain Our Hearts” chosen to represent Germany’s “Musicians For Peace” event broadcasted across the globe for world peace and five award-winning albums: Living With Music, The Human Pain”, Nobody’s Home & Dance With Me, young award-winning New York-based tenor singer, songwriter, music producer, multi-instrumentalist, actor, creative producer, poet, author and painter Mauro continues to be recognized as one of the young rising stars in the international music scene.

Keep up with Mauro’s new music projects and tours on his website: