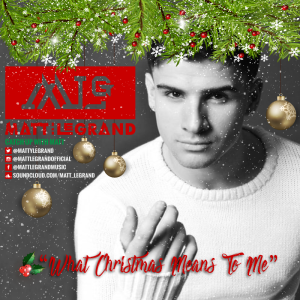 To kickstart the holiday season, rising pop artist Matt LeGrand recently released a cover of Stevie Wonder’s “What Christmas Means To Me”. Check it out here.
Spending his infant years in France, LeGrand and his family relocated when he was seven years old to Chicago, where the vibrant city and its influential musicians made an immediate impression on the youngster. Here, he found himself exploring a different genre every night, and diving headfirst into the creation of his own sound.
In 2015, LeGrand released his debut single, “Spring Break Girl”, which not only solidified him as a must-watch talent on the Chicago scene, but also a rising star in the national pop world. The coinciding video experienced a meteoric rise, eventually grabbing the attention of tastemakers at MTVU, where it was played on a consistent rotation.
LeGrand’s latest original single, “All Good”, was released in July 2017 and garnered praised from HuffPost, AXS, Celeb Mix, Kings of A&R and more. The video is also being played in over 1,300 Footlocker locations this month as part of their pop reel.

HOLLYWOOD IS FULL OF BLOODSUCKERS

Breaking News – Save The Date: The Hollywood Christmas Is Back!!! Join Us In The Streets of Hollywood, CA on Sunday, November 28, 2021...