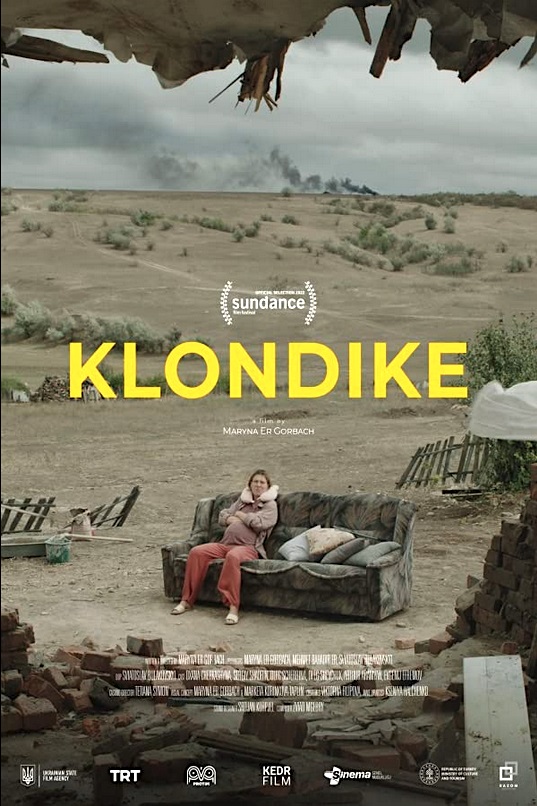 One of the highlights of this year’s SEE Fest of new films from South East Europe is the North American theatrical debut of Maryna Er Gorbach’s Sundance prize-winner Klondike (Ukraine/ Turkey, 2022). This timely war drama set in eastern Ukraine’s Donbas region takes place at the time of the 2014 tragedy downing of Malaysia Airlines Flight 17 amid the conflict between Russia and Ukraine, which began eight years ago in Donbas between pro-Russian separatists and Ukrainian nationalists.

The film provides us with a vision of the ongoing war in Donbas and its impact on the region’s civilians – in particular, the innocent women to whom the film is dedicated. Winning the directing award in Sundance’s World Dramatic competition ahead of a European premiere in Berlin’s Panorama strand.  Ukrainian writer-director Maryna Er Gorbach largely assumes the viewpoint of a heavily pregnant farmstead owner as her life and home quite literally fall apart on July 17, 2014, the day a Malaysia Airlines passenger flight was shot down over Donbas, killing nearly 300 people. Irka, in a truly memorable performance by Ukrainian actress Oksana Cherkashyna, is determined to stand her ground even as her fellow villagers flee oncoming armed forces. After the screening, Oksana Cherkashyna was present to field questions about the film and her work as an actress in making Klondike.

Maryna Er Gorbach, who wrote and directed Klondike, her fourth feature, found a perfect way to show how the war literally came into the homes of the people of the Donbas region. Notably, this is the area where the Malaysia Airlines aircraft Flight 17 was shot down by Russia-supporting separatists, killing all 280 passengers and its 15 crew members. Er Gorbach was especially affected by this incident not just as a Ukrainian, but because it occurred on her birthday, giving her a sober reminder of the unending cycle of birth and death. Horrified by the global catastrophe, she felt a need to do something to stop feeling hopeless. Together with her husband, Turkish filmmaker Mehmet Bahadir Er, she created an independent production company and made the film in an effort to bring awareness and a better understanding of the conflict – within and outside of Ukraine.

Irka (Oksana Cherkashyna) and Tolik (Sergey Shadrin) live in a modest house in the Ukraine border town of Hrabove in Donetsk. The territory is the disputed one between Russia and the Ukraine that is currently occupied by the Russian army as of May 2022. Many people living in Donbas back in 2014 began moving away because of the threats of war. The real-life plane crash proves to not be the first shattering event that jolts the fictional narrative of Klondike into action. The film’s opening scene takes place in the modest farmhouse that Irka shares with her husband Tolik when a mortar misfire decimates one exterior wall, leaving the interior a wreckage of dust and debris. This alleged “mistake” on the part of local anti-Ukrainian separatists, one of whom is a none-too-apologetic friend of Tolik’s. The incident is, in Tolik’s view, the final straw that should prompt the couple to leave the farm before their child is born. Irka, however, resents the idea of having to leave her home over men’s fighting, and obstinately enters survivalist mode. She continues canning vegetables from the garden, milking their one weary cow Maya and attempting a cleanup of their ruined living room.

Klondike might seem like a strange title for an Ukrainian war drama set at the time when the conflict with Russia began to spike in 2014. Referring as it does to the Klondike Gold Rush (the setting for Chaplin’s famous silent comedy), we could expect the resonance of two historical events to overlap, or at least sense a link between the actual subject and the analogy. But any gold in the grey expanse of the febrile Donbas region, where Klondike is set, is not to be found: The landscape seems only dotted with cows and convoys of surface-to-air missiles and the wreckage of Malaysian Airlines Flight 17.

Director Maryna Er Gorbach offers an unblinking gaze into the abyss, a pitiless panorama of struggle – all very uninterested in the verité-style images that supposedly give films on this subject some sense of authenticity. It is helpful to recall that the original Klondike Gold Rush in the Yukon, in north-western Canada occurred between 1896 and 1899 but the settlement rapidly declined and largely abandoned. (It is worth considering what happened to Dawson City in the Yukon, as captured in the 2016 American documentary film Dawson City: Frozen Time, by Bill Morrison.)

Klondike begins on a black screen, and we hear a dialog between a man and a woman. Tolik (Sergey Shadrin) and Irka (Oxana Cherkashyna) are casually discussing whether or not to install a large window in the living room to cover a huge hole in a wall of their home. The first image that appears on screen is an idyllic picture of a southern beach with palm trees. It is the wallpaper in their home in Hrabove, a village in Eastern Ukraine that just happens to be in the middle of a conflict zone in the Donbas region.

Tolik is protective of his pregnant wife and is eager to leave the area and find a safer home for her and their unborn child. “Let’s go to a place where there is no war,” he urges Irka, who is fiercely dedicated to their war-marked home she has cared for over the years. While Tolik argues with Irka’s brother Yaryk (Oleg Shcherbina) and a neighbor who wants to join the war effort, Irka tends to her home, dusting the couch and calming down the family’s spooked cow after the sound of a huge crash. Even though the airplane has been shot down just outside her village, it’s only when she sees the news report on television that she incredulously asks, “Is there really going to be a war?”

The signs of war are all around. Wide shots that once presented pictorial landscapes now are being replaced by wide shots of a village cemetery that grows every day. In addition to the local casualties, there are hundreds of dead foreigners that are victims of the military strike. It seems that even the sunflowers have bowed their heads over dozens of black body bags that were down in their fields. The fallen aircraft’s wing makes it impossible to overlook the tragedy and turns this place into a memorial site. More and more family members from all over the world arrive in Hrabove to claim bodies, emphasizing the global reach of the conflict. Irka overhears a mother of a crash victim tell her husband, “I am sure she’s alive. I feel it.”

As a mother-to-be, Irka also is unable to give up on her dream for happy family life. Leaving her home would be a betrayal of the love put into it. Femininity in the film serves as a beacon of hope, unwavering despite the dark reality. Tolik’s tiny village is seized by Russian Separatist troops and no one can leave. Their only cow is slaughtered and the meat is given to the occupying soldiers. The attack leaves Irka in a state of shock. Though Tolik is a Separatist sympathizer, he wants no part of this bloody conflict. With the help of her loyalist younger brother Yaryk (Oleh Shcherbyna), the three of them try to put the wall back together (a symbolic message of Yaryk accusing Tolik of being a traitor, which leaves everybody angry and with little hope of ever resolving things but only to try and survive this mess).

As Tolik attempts to play all sides for the sake of domestic contentment and protection in the community, his middle ground becomes untenable once aggressive soldiers invade their small home. Irka is due to give birth at any moment. Without undue contrivance or melodrama, Er Gorbach overlaps escalating marital tension with the larger war closing in on the couple to claustrophobic life-or-death effect, building to a finale of staggering savagery. Klondike stands as one of the stronger dramatizations of this crucial moment in recent history.