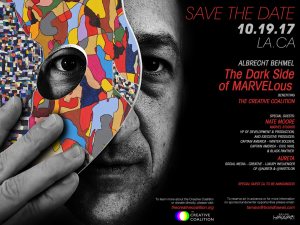 Los Angeles, CA (The Hollywood Times) 10/20/17 – “The Dark Side of MARVELous” series of paintings by German-born pop artist Albrecht Behmel was celebrated in style at the Hills Penthouse located at 8560 Sunset Boulevard in West Hollywood on Thursday, October 19th, 2017 from 7-10 p.m.  Behmel and his lovely wife Afraa Zammam traveled all the way from Germany to raise relief funds for UNICEF to aid our neighbors in Mexico by means of this show.

Guests could inspect Behmel’s artworks while sipping sophisticated cocktails and appetizers and savor stunning city views second to none.  The dress code was creative chic!

Albrecht Behmel’s unique kaleidoscopic style was heavily influenced by Keith Haring and Piet Mondrian.  “This style is about the connectedness of all beings however different they may seem,” says Behmel, underscoring the humanitarian goals of the West Hollywood event. 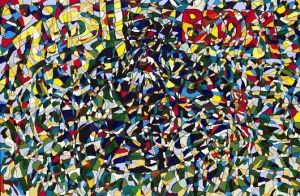 Nate Moore from Marvel Studios was a special guest.  The newest addition to the Marvel Cinematic Universe is BLACK PANTHER, scheduled to debut in theaters on February 16th, 2018.

BLACK PANTHER is the first movie to star the first mainstream black superhero in comics and the first Marvel film to feature a predominantly black cast, with veteran talent including Forest Whitaker, Angela Bassett, Phylicia Rashad, and numerous others.  The Black Panther character was first created by Stan Lee and Jack Kirby in 1966 and is featured front and center in Albrecht Behmel’s “MARVELous” series. 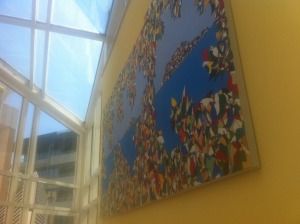 Albrecht Behmel’s works can be viewed and purchased online by visiting the following link: www.themagicoftheswarms.com 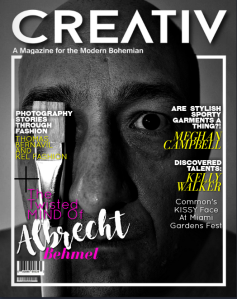